Satisfied with his own inspection, he bends over to grab and fasten his parachute harness between his legs. Up the ladder he goes, and into the seat. I follow up the ladder and connect his G-suit hose while he belts himself in. He leans forward for me to fasten his parachute shoulder straps. I give them a good tug to make sure they’re secured, and then shake his hand. 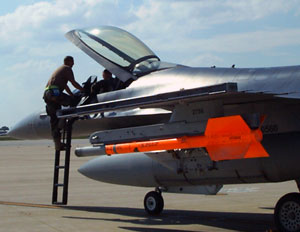 Down the ladder I go. I remove the ladder and place it on the ground outside the danger area.

One quick walk around near the intake to make sure the panels are closed and nothing is hanging. I head to the back of my jet and put on the headset to wait for the electronic sound of the battery being turned on that is followed by the intercom coming to life… I can tell because I hear breathing — the pilot has his “hot” microphone turned on.

“Hello hello…how do you read Chief?”

“Got you loud and clear sir.”

“Well, I’m ready when you are”

“Yes sir! Area clear fore and aft, wheels are chocked, and fireguard posted. You are clear for Start 2”

JFS (Jet Fuel Starter) exhaust doors open. There is a pop and then a loud whine as the accumulators dump their pressure and start spinning the starter. Five to ten seconds later we have ignition and I feel the heat coming from the JFS exhaust doors. The small JFS engine roars to life. 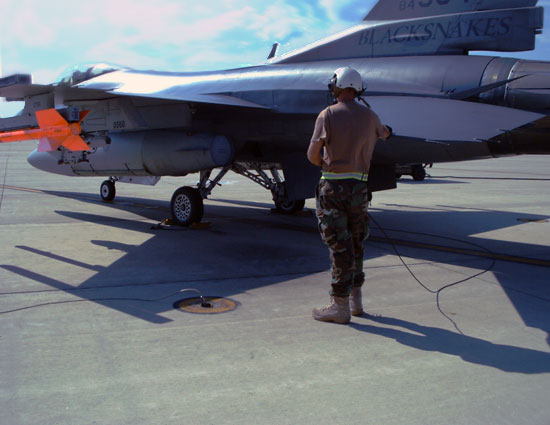 Through a gear box and PTO shaft the engine begins turning. One minute after the JFS comes to life it’s time to pour the coals into the engine.

“Going over the hump.”

The pilot advances the throttle from cut-off to idle. There is a low rumble as fuel is introduced into the motoring engine and ignited. The rumble gets higher in pitch until the engine finally becomes self-sustaining. With a gasp and a belch of smoke, the JFS cuts off, no longer needed to turn the engine.

Time to get busy!