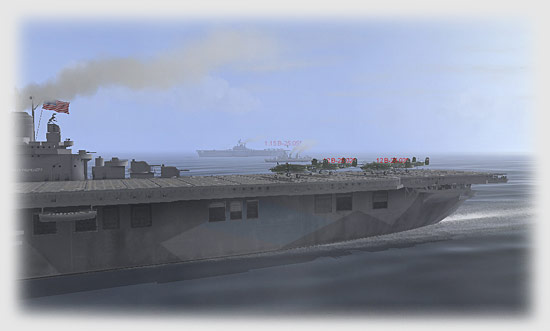 Another thing missing are some of the more common ships seen in the game. Some of the more famous carriers are in the game, such as the Lexington class. Actually the Lexington and Saratoga are both represented in the game, although the model of the “Lady Lex” modeled is a pre-war configuration (with 8 inch guns, not the customary dual use 5 inchers common to carriers during the war). The Essex class is represented as well, but interestingly the Yorktown class is not present in the game. The Japanese have the Kaga and Akagi but there are none of the smaller CVLs that really pulled yeoman’s service during the war. 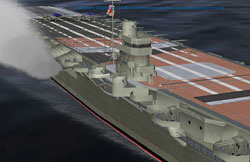 More interestingly is the lack of almost all of the major capital ships that were part of the Pacific. I don’t expect every single battleship or cruiser class to be represented in the game but there are no U.S. battleships or IJN battlewagons — only the King George V class dreadnoughts are in the game. In addition there are no British destroyers or cruisers, no IJN heavy cruisers and only the USS Indianapolis (a Northampton class if I remember correctly) is represented as a heavy cruiser in the game.

If you have a full FB / AEP / PF install you can add some of the earlier warships like the Tirpitz and several Russian heavy cruisers and destroyers. This helps but for those of us that thrive on immersion, I really would have liked to see some of real ships that took part in these battles. A Pearl Harbor scenario with a bunch of King George V battleships just doesn’t look right. Attacking the Yamato is impossible in the game. There should have at a minimum been two types of IJN battleships, two types of U.S. battleships (more for a credible Pearl Harbor scenario), several cruisers and the Yorktown class carriers. It’s a gripe, but IMHO, a major one. 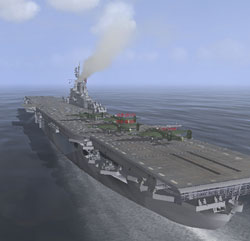 Ok, enough negative. One of the more positive things about Pacific Fighters are the flight models and the way the aircraft fly in the game. The flight models aren’t perfect, there are some areas to gripe but the 3.01 patch brings the game up to a higher level and makes for a very enjoyable, and IMHO realistic game.

Carrier use is a new feature of Pacific Fighters and I can’t think of a more ingenious way of maintaining the feasibility of carrier operations. One of hardest things to figure out had to be what to do with aircraft that land on the carriers. AI was easy, you just have them de-spawn after landing but online play was a little more difficult. By applying chocks after landing you make your plane essentially invisible, or in reality you remove the ability to hit the aircraft. This way an entire squadron can land on an aircraft carrier without the difficulties of making usable elevators or despawning out of the game completely.

Taking off from a carrier is probably easier than it should be. In CFS2 I spent a lot of time trying to keep my aircraft on the ship but in Pacific Fighters the takeoffs seem to be a whole lot easier. Once I lock my tail wheel and throttle up I generally take it straight off the carrier. Now if I firewall it I tank it, but a gradual increase in throttle tends to lead to a generally straight takeoff. That doesn’t mean that taking off with every aircraft is easy. A fully loaded F4U can be very hard to get off any carrier, especially the smaller escort variety that come with the game. The key is dropping flaps and bringing up power quickly but smoothly. 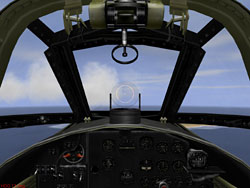 Landing is a little bit harder. Hitting a moving target with your aircraft requires more than a little bit of practice. I have had some experience with Warbirds, CFS2 and Aces High but to me this feels like the most realistic of all the landing programs. Unlike CFS2 there is no LSO to guide you in but in all honesty I never used the LSO to begin with. The F4F and the Zeke have the ability to raise the seat, a very nice feature for those trying to see over the nose of their aircraft. You can’t do this in other planes, including the F4U. What would be nice is the ability to move yourself around in the cockpit, ala Aces High, especially when lining up a difficult trap.

Which brings up the TrackIR3 Pro and its latest feature: “6 degrees of Freedom” support. Microsoft has embraced the technology, importing it into FS 2004 and into CFS2 (which didn’t originally have TIR support). Essentially, TrackIR3 Pro owners now have the ability to not only move their head on the left right axis but also to the front/back and to the sides. Oleg decided that the cockpit graphics may not look quite so hot with this feature and has declined to update Pacific Fighters to take advantage of this technology. He may change his mind later, who knows. Right now the TrackIR works fine in its “2DOF” mode and it is just as good in Pacific Fighters as it is in the rest of the IL-2 series.

I would have liked to see this feature in Pacific Fighters. The IL-2 series has always been a cutting edge sim when it comes to new hardware but I won’t get too wrapped around the axle. I know Oleg wants to devote most of his time to his next sim and every time he goes back to the IL-2 series he has to delay working on Battle of Britain.