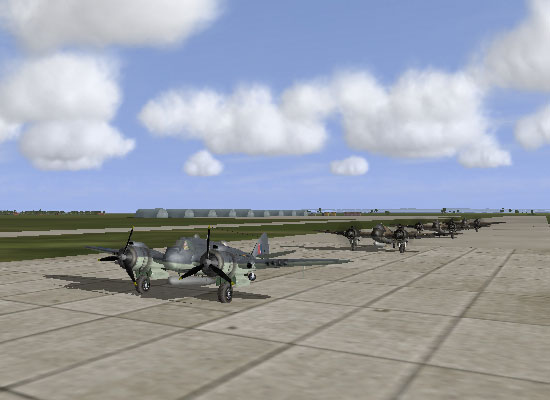 What Makes a Good Mission? Drama

Drama is the hardest thing to describe because it is different for each of us. It is that little touch that makes a mission a bit special. For some it may simply be a cunningly designed port as you race your Heinkel torpedo bomber between the lighthouses to strike the freighters in a home-built Tripoli. Something I make a lot of use of is 4 Katyusha rocket launchers: your squadron of IL-2’s is tasked with attacking tanks approaching a defended village in the battle of Kursk. As you approach you see the explosions and plumes of dust and smoke thrown up across the battlefield by the Katyushas firing on the tanks. You don’t need to see the launchers themselves, but the explosions lend drama and urgency to your attack.

The two new machine-guns (.50cal and 7.62) also improve ground attack missions and help give the impression of infantry being present.

The most recent IL-2/PF version (currently 4.01m) added smoke and fire that can be used to good effect. Place a couple of tanks or trucks along the road with Smoke1 and Fire1 — they are still killable but it looks neat. Place a smokescreen around a bridge that engineers are building a pontoon across or in fields between two villages in Normandy that Shermans are about to cross. Another good use is at the Seelowe heights — Russian aircraft laid a lot of smoke before the Red Army crossed the river.

What else do we have? We can now use dummy planes, both single and twin-engined. The Germans used to place written-off and wrecked aircraft at the obvious positions on the ramp (airbase parking areas) while hiding the serviceable fighters in trees and camouflage netting, with just a pair on Alarmstart duty. With perhaps six 20mm guns (in game, more in reality) the careless or unlucky player may find his first pass completely wasted and any subsequent attempt to root out the real targets hazardous indeed. Either way, it is memorable.

A quick trawl through the objects and static objects list often throws up plenty of ideas for missions and targets. A V1 or V2 site? Bulldozers clearing the jungle for a new runway? Bunkers at the German/Polish border? Hungarian tanks north of Stalingrad? Landing craft in Motovskiy Bay? Po-2’s at a podskoka at the edge of a wood as dusk falls? An ammunition dump with Nissen huts hiding ammunition railway cars? There’s always something that’s a bit different. Equally, a few new objects add a lot to existing maps — what railway station was without a water tower in the 1940’s?