The Final
There is a period of time from the pilot’s roll out until his release point. During this time, the pilot will be aimed at his AOP and will be established on his dive angle. This part of the bombing pattern is called the final and the amount of time taken to fly it is called the time on final. We need to know the dimensions of the final to understand how it fits into the overall picture. We can mathematically compute the length of the final. This time we reference our final triangle.

We start by deciding on how much time on final we want. In the real world, this time is short, usually no more than five seconds…in fact, USAF qualification standards limit the time on final to that figure…if the pilot exceeds five seconds on final, his score is thrown out.

The computation begins with the pilot determining what his speed will be during the time on final. Usually it is an average of his roll out speed and his release speed. The pilot then changes his airspeed in knots to speed in feet/second (a quick technique is to multiply your airspeed by 1.7 to get feet/second…for example, 500 knots equals approximately 850 feet/sec). Next, the pilot decides on how much time he wants on final. Let’s say he wants five seconds. He then multiplies 5 seconds times the feet/second number. The result is the length of his flight path during his time on final…in our example, 5 seconds times 850 feet/second gives us a distance of around 4250 feet.

Remember…that distance is the length of the flight path. Now the pilot has to use a little trigonometry to determine what that distance is along the ground. At this time, we also note the vertical leg of this triangle…this is the amount of altitude used in the time on final. The next figure shows these components of the final. 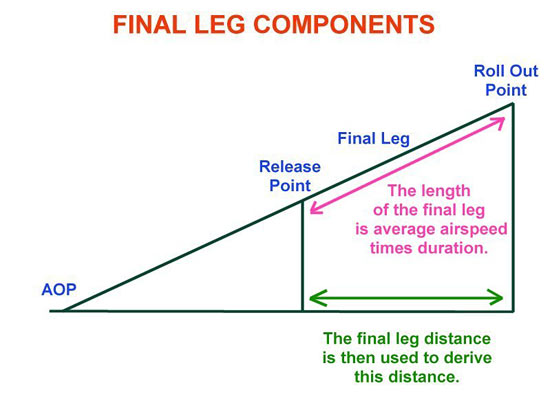 By adding the final to the release point, we now have a larger chunk of the dive bomb pass to look at. Of particular interest is the end of the final. This point is the roll out or track point. By adding the horizontal and vertical components of the final to the release point, we can easily see how far the roll out point is from the AOP and how high it is above the ground. Now, we turn our attention to the maneuvering that the pilot does to arrive at the roll out point. We refer to this as the roll in. 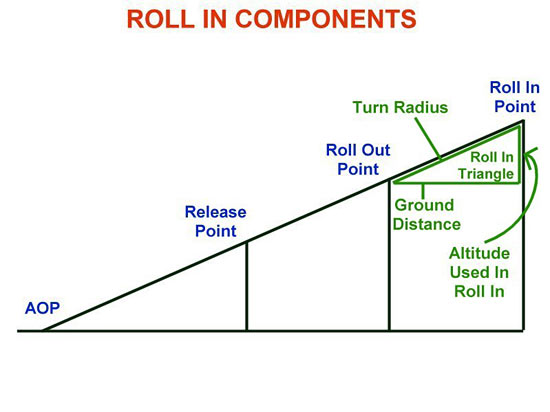 The Roll In
Figure 6 is a side view of a dive bomb attack. The flight path line is extended upwards from the release point to the roll in point. The significance of this figure is that the roll in point is mathematically defined. This point is planned to be both a specific distance from the target and a specific altitude above the ground. This allows the pilot to begin the roll in at or near his planned dive angle. If the pilot begins the roll in and is not at this point, he will most likely end up with the wrong dive angle…as a result, he will have to make an error correction to get the bomb to the target.

In addition to range and altitude parameters, the pilot has to be concerned with his desired attack heading. Often times, there will be target restrictions that require the pilot to attack on a specific heading.

Airspeed on base leg is also important. Not only does it figure in to how much g you can pull in the roll in…but it also is a factor in attaining your desired release speed. If you are too slow when rolling in, you may not have enough time in the dive to accelerate to your release speed.

All of this raises the question of how a pilot determines his roll in point. From his cockpit perspective, he has four variables to control. First, he needs to be at the desired roll in altitude. Then, he needs to be at his desired speed. So, his first two objectives are basic aircraft control items…airspeed and altitude. His remaining two variables are position parameters…he must be a the desired distance from the AOP, and he must initiate his roll in at the proper point to meet his attack heading requirement.