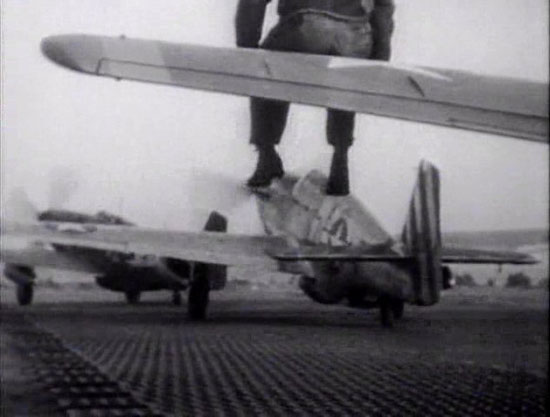 It was a sunny Mediterranean afternoon on the island of Corsica July 5th, 1944. A group of American P-51 B Mustangs from the 309th Fighter Squadron, 31st Fighter Group had earlier landed on the small airfield near the town of Ajaccio to refuel. They had just completed their escort mission of a group of B-24s over the coastal town of Béziers, France. The rail station there, which now lay in ruin, was destroyed to interrupt the rail supply to German forces in the region. Today’s mission had been uneventful for the squadron as no enemy fighters were encountered. With the planes refueled and lined up in pairs on the runway, the pilots were ready to return to their home airfield at San Severo, Italy on the Adriatic coast. In the last plane on the runway sat Lieutenant Donald Taylor, a 22-year-old “Upstate” New Yorker on his fourth mission. Taylor had not yet been assigned a plane of his own and was flying one assigned to another pilot with the paint markings of WZ-I.

On this particular mission, Taylor flew wingman to one of the ‘Old Men’ of the squadron, Captain David Wilhelm, who had already been credited with five confirmed kills. With low winds, the planes began taking off two at a time. The runway clear of the preceding planes, both Wilhelm and Taylor began rolling down the runway ‘line astern’ from each other. Once in the air, Wilhelm glanced over to Taylor’s plane and saw that he was only a couple of seconds behind. Wilhelm would recall years later, “After lifting off and starting a gradual (not a steep or abrupt) climbing turn to the left, I turned to look for my wingman. There was no sign of him.” Wilhelm began calling out to Taylor via the radio but did not receive a response. Fearing the worst, the squadron began a circular search pattern above the water. Mysteriously, the plane and its pilot seemed to have vanished without a trace. Later that evening upon returning to base, Wilhelm would report at the mission debriefing that WZ-I plunged into the sea likely killing the rookie pilot.

But, the pilot was very much alive. Shortly after takeoff and with only 400 feet altitude, the plane’s engine, for reasons unknown, seized. Taylor quickly evaluates his situation and realizes that the plane does not have enough speed or height to turn back to the airfield. Furthermore, he was much too low to parachute out. His only viable option is to ditch in the ocean which lay in front of him. He cringes at the thought as ditching a Mustang in water was something his flight instructors clearly told him to avoid at all costs. He knows that the Mustang’s large air-intake on the bottom of the plane will quickly trap water thus preventing the plane from gliding gracefully across the surface. He also knows that once on water, the plane will sink like a rock. With no time to radio his situation to his wing-leader, Taylor opens the canopy and releases the drop tank just in time to clear the roof of a house sitting on a peninsula jutting across his flight path. Although Taylor does not see it, a witness standing on the peninsula observes flames, two meters long, spewing from the exhausts.

Taylor breathes a quick sigh of relief having cleared the small land mass. But the relief is short lived as moments later the plane contacts the water with a violent impact. Taylor’s body is jolted forward cutting his face on the gun-site. The plane bounces twice and swerves to its side and immediately begins to sink. Water quickly rushes into the cockpit sucking the plane and the pilot into the sea. Within seconds, Taylor is submerged underwater and manages to grab an inflatable life raft from the cockpit and triggers the oxygen release of his Mae West preserver. Once back to the surface, he climbs into the inflated life raft with a great deal of effort. With blood covering his face, he determines that he is a mile from shore, maybe two. His energy drained, he closes his eyes and begins to sleep. He is soon awakened by a French soldier swimming in the water who, with his comrades, has witnessed the crash from the shore. With courage and heroism, the soldier tows the raft with the pilot in it back to shore. Taylor would be treated at a nearby hospital and returned to duty eight days later. He would later finish the war with fifty-seven missions. 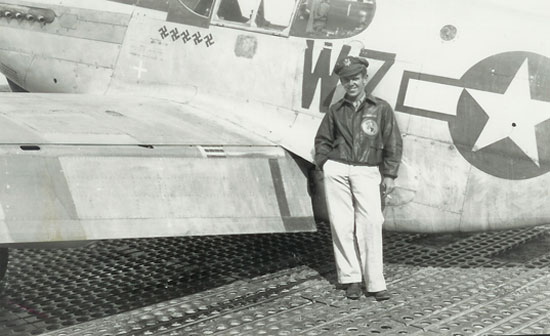