Like lemmings racing to a cliff, the SimHQ team has once more rendezvoused in sunny Los Angeles for the E3 Convention. I’m clueless as to why SimHQ corporate still shells out the per diem bucks needed for us to make this trip — surely at this point they must realize that we’re just going through the motions, cheerfully lying to ourselves about the true state of our beloved simulation genre. Deep down, I think all of us — 20mm, Hornit, guod, and myself — know the horrible, inescapable truth: that quality simulations are dead, gone from the marketplace, a mere memory of days gone by.

Heck, there won’t even be any booth babes this year, so what’s the point in it all?

Oh sure, we’ve completely filled our appointment calendar with trivial interviews concerning new software and hardware that caters to our arcane hobby, but really we’re just kidding ourselves. What self-respecting simulation fan will want to read about Bohemia Interactive’s latest tactical sim projects? Or CH Products’ new HOTAS products? Or Saitek’s new rudder pedals? Or the latest racing sim from SimBin? Or Microsoft’s FSX? Really, it’s all such a waste of time and effort for us.

And every year, it seems that the number and quality of flight sim titles are dwindling. There’s hardly anyone at all to talk to about flight sims; yeah, we’ll be meeting with C3PO from Lead Pursuit, the Flight Sim X team from Microsoft, Oleg from 1C, “Wild Bill” Stealey from IENT and RJester from XSI. But, last year there were tons of new flight sims coming out… I mean, there was… well… uh… ooh, there was… and… and who could forget, uh… well, there’s three that I can think of, but surely I’m forgetting a few dozen others. Surely…

Well, I just can’t talk about this anymore. I think I’ll go slit my wrists and take a warm bath while I lament the demise of my beloved simulation hobby. And the lack of booth babes. Sigh…

I hope you sense a twinge of sarcasm and glee in the tone of this article. It’s great to be in LA again with the superb staff of SimHQ, sharing the discoveries in store for us at E3 ’06. With what’s on-tap, this year’s show should dispel the “sims are dead” argument — at least for another year or two. Big things are waiting in the wings for simulation fans in the coming months, and it’s exciting to be here to get some early insight into what’s on the way.

G4 is broadcasting live from the show floor.

As always, setting foot in the LA Convention Center as production teams frantically put the finishing touches on literally hundreds of millions of dollars worth of marketing displays is always an impressive sight and a bit overwhelming. Even though the displays were not yet open, the media were busily moving about the three main halls of the center, logging their first reports, getting their bearings, sneaking the occasional peak at the display prep, and picking up their credentials. Exciting stuff, all. 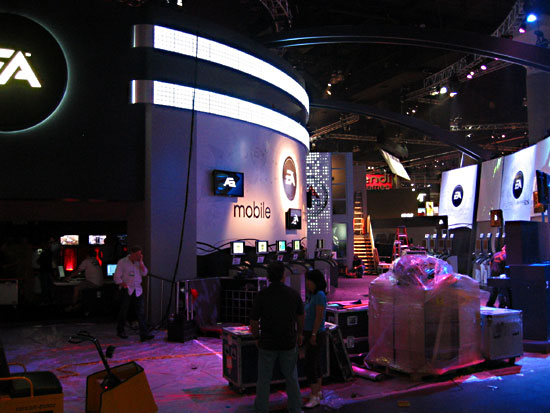 The setup for the show will continue far into the night… 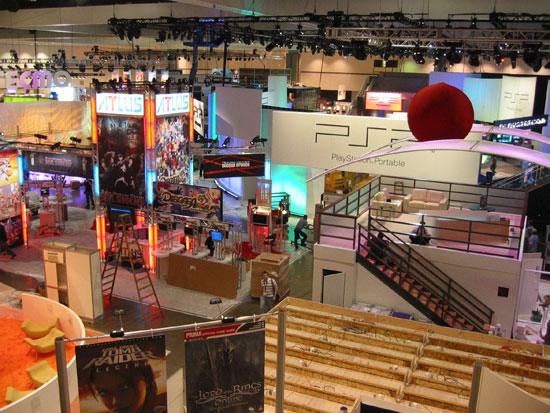 …and by tomorrow morning… 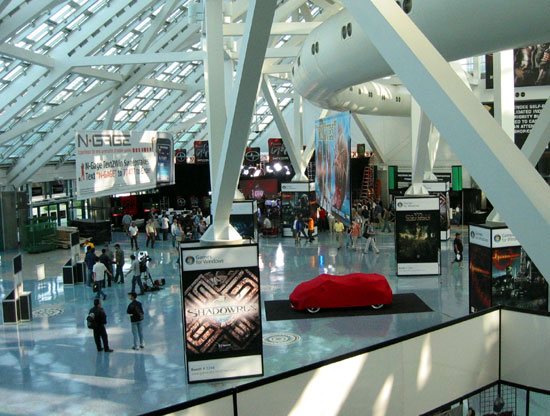 …it will all look perfect.