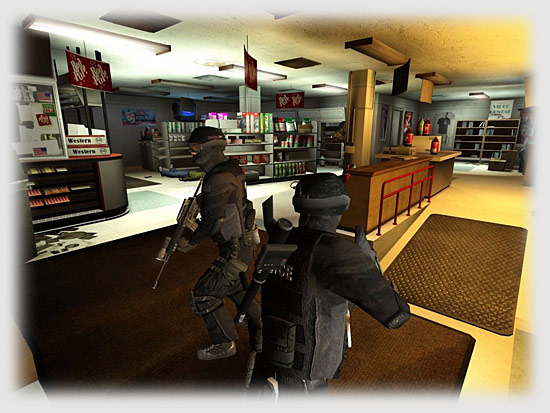 SWAT 4 contains many of the nice toys from SWAT 3, along with a lot of new

toys. The officers now have plastic flexi-cuffs to make there apprehensions with. You now get beanbag rounds for your shotgun, you get the regular flashbangs, and tear gas, but now you can have the ultra cool rubber ball grenades, which explode and shoot rubber balls everywhere, really putting a hurting on anyone in the blast radius. You also get pepper spray now, which I thought was stupid until I got a face full of it in a multiplayer game, and had to stare at a red screen for a few minutes, while the action continued around me. Another cool, new toy is the Tazer, when you shoot that at a subject the wires come out and prong you center mass, you then get shocked for about ten seconds, and can’t move. You almost feel sorry for your in-game character because you just know that it’s got to hurt.