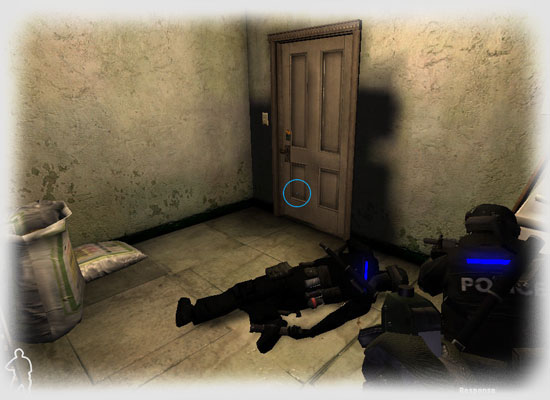 You get a handful of new weapons and some useful (and useless) toys.

There are four primary weapons:

You also get some new tactical gear like an ammo pouch and light sticks, (which were requested because of its popularity in SWAT 3.)

You also have new protective equipment like night vision goggles and an option of no armor to let you move faster and, hopefully, fire a little quicker and straighter.

All are nice toys but some have no place in SWAT. Some were put in just for multiplayers like the machine-gun and sniper type rifle. I applaud Irrational Games/Havok (the latter making the expansion I believe) for adding them, but once again I personally feel that some are not needed in this type of game.

The best new feature, single player related, is the ability to give orders to your AI team and have them hold that command until you give an “initiate” command. This comes in handy when you want to enter the same room from two different directions.

You get a new multiplayer mode called, “Smash and Grab” which is kind of like capture the flag, but instead it’s a suitcase.

You get a new co-op quick mission maker, which just takes one of the default maps and makes a new basic mission out of it.

You also get a lot of multiplayer server options and tools like Arrest time deductions, additional respawn time, and a new co-op leader.

Cooperative play has been adjusted with many requested improvements. For instance now you can vote on one leader, and only he can give orders. You can vote to kick players out of the server, and you can also vote to change the map while in game.