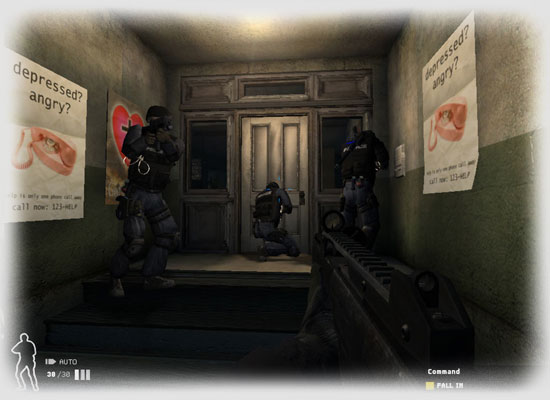 If you have SWAT 4, then spend the extra $20 for the add-on; the improvements and special features are just too great to pass up. But if you’re tight, and 20 bucks is a lot of money to you, then just go download one of the popular SWAT 4 mods that adds most of everything the official add-on does. This add-on will get boring after a while just like the original game did because of the lack of maps, so you map makers keep them coming. We need more. The more new and unknown maps, the better and longer this game will last.

Since cooperative play seems to be very popular especially with a community like ours, I’ve decide to share some hints and tips along with this review for your gaming pleasure. If you play SWAT 4 the way it was intended and designed to be, with teamwork and tactics, you will enjoy this game a lot more, and a lot longer then those who don’t. SWAT 4 is not a run and gun; it’s a “tactical simulation” in my book.

My six rules for good co-op (subject to debate):

1. While the mission loads, while you’re at the weapons screen, talk about what you have or what you’re taking… and FYI, that non-lethal crap is BULL. Your primary should be a killing weapon and a back up should be the tazer or other non-lethal. Flash bangs are a must, and a door wedge. Every two man team should have an opti-wand. Also pick a Leader, and assign two man teams… usually red with red, blue with blue. Obey and listen to the leader, and stick with your assigned partner.

2. Clear the outside first. I recommend you wedge all the doors except for the one you will be entering, if possible.

3. The element leader is in charge; you obey and follow his orders. He does 90% of the talking, while you should simply be calling targets, calling “clear”, or describing an opti-wand view when asked. Keep the teams relatively close; while two are downstairs, two don’t clear upstairs … not enough firepower… now if you have ten players, then five up and five down is ok.

4. Don’t over extend. If you enter a large room that leads to a partly covered back room or area, enter and hold, treat it as another room.

6. Understand that going through halls or preparing to enter a room is slow and methodical, opti-wand every room; call the subjects and locations, along with victims. Form a room plan (lead does this) “Breach, Bang, and Clear”, “One blow it, Two flash it, One enters and engages subject (first one in a room goes after known subject), Two enters and clears opposite or dark corner, Three then Four go deep in and star left and right”. (If you don’t know these meaning, read my “using real world tactics in computer games” article.) It’s slow and methodical on the set up, but when it’s a GO… it’s fast and furious, all of the elements should be in the room within 5 seconds, within 10 the element leader should be hearing clear, four times.

The opti-wand is an intelligence tool… One two-man team is assigned to wand a door. The one with the wand uses it while his partner keeps his gun on door, in case it’s opened while wanding. The wand officer reports the description of the room: how many subjects, how many with guns, and their location, (deep, close, left, center, or right)…

“Small room, closed door on opposite side, subject with long gun far left around 10 o’clock, hostage close in front, 5 feet or so”.

“Long hall way to the left with two closed doors, right side is a wall, to dark to see end of hall, no contacts”.

“Open room with extension to the left, bad guy kneeling behind desk, no hostages observed”.

Then everyone shuts up, and the element leader calls out the plan… the plan being based on the intel… if subject contact, should use bangs or stingers, One opens, Two tosses, One enters and immediately engages subject, then Two enters, then Three then Four… Bang, shoot, One”subject down, clear”, Two, Three, and Four… “Clear”.

If a empty room, the EL could say something like:

Enjoy the game; see you on the mean streets.