“Sleep? We don’t have time to sleep! You can do that on the plane ride home!!” Or so said Chunx when responding to pathetic complaints from WKLINK about the lack of sleep opportunities, after a writing session that lasted into the wee hours of Thursday morning, followed up by a full day of walking around the expansive floors of the LA Convention Center, all in an effort to bring you the best of this year’s E3Expo. It’s now 2 AM and we’re putting the final touches on today’s report.

Here’s a rundown of what we saw on Day 2 of our adventure in LA.

Day 2 was probably the most productive for me as a flight simmer. There were also some good things seen as a wargamer and general gamer as well. After only a few hours of sleep last night I found it somewhat hard to maintain my concentration, especially later in the day but hopefully what is here is coherent.

Rick Ladomade came by and gave us a chance to see a very early video of some early renditions for Xtreme Simulations International’s upcoming Fighter Ops jet simulation. There really isn’t a whole lot to report, or that he really wants out right now concerning the game since many of the desired features of the game really haven’t been decided upon. What we did see though did give us some hope that a full blown hardcore jet simulation was not only possible but may actually be released in the near future. Don’t go out and sell off your copy of Falcon 4 quite yet, this title is very early in its life but hopefully we will hear see and partake in more in the next few months as the title begins to develop momentum.

1C had to have the most interesting titles as a group. Of course the first game I had to look at wasWhirlwinds of Vietnam. This is very much a working title at this point, the final name is still forthcoming. What we saw was a very, very early pre-alpha version of the game and we had a chance to sit down and chat with Gerasev Sergey, the producer of this game. What Gerasev and the development team at G5 Software have done to this point is amazing. The team has literally had only five months of coding time in the game and they have already come up with what looks to be a fairly stable setup. It is certainly a very early build but the stuff I have seen so far appears to be first rate.

Whirlwinds of Vietnam is going to start in the early stages of the US involvement in the Vietnam conflict. For those folks that want to get involved in a “We Were Soldier’s” type of environment flying the air cav into harms way in the jungles of South East Asia.

Three major helicopter types will be modeled in the game. The workhorse of the Air Cav, the UH1 Iroquois will probably do the yeoman’s work in this sim. Most of us know that this helicopter, considered by many to be the first true practical combat helicopter, is planned for use in this game as an air transport vehicle, air ambulance, and hasty ground attack vehicle.

Other planned helicopters include the CH 46 or 47, the twin bladed Chinook that is used as a heavy air transport. Also planned is an early version of the AH1 Cobra gunship; which made an appearance late in the conflict and struck terror in the hearts of the North Vietnamese. According to Gerasev Sergey there are no plans to model any Soviet era helicopters in the game. 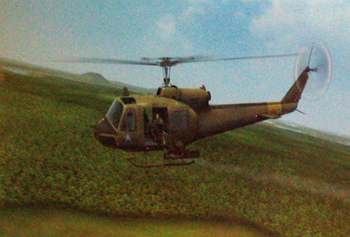 The game plans to ship with an 800 square kilometer area that will cover a large portion of the Vietnam area. The game will ship with most of the major engagement areas covered in depth. Several small villages and some smaller towns will be modeled but I am not sure to what level large cities will be developed. This game is really in its early stages so stay tuned on these items.

The goal will also be to have a progressive campaign (I am not sure if it will be completely dynamic, I am guessing not) that will include some of the major combat actions of the war. Right now Gerasev is still fleshing out the types of single missions, admittedly it seems his focus is on some of the engagements seen in movies like When We Were Soldiers but I suspect some of the more infamous battles will be looked at and probably added. The campaign setup is also still at an early stage and not fleshed out well yet. 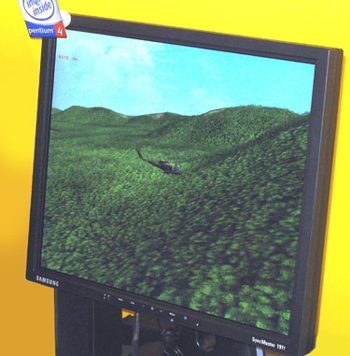 I have been assured that the flight models will be as accurate as possible for the PC while at the same time scalable to allow novices to learn to play without fear of such things as transitional lift or leading edge stalling. It will be interesting to see how the flight models fill out, especially as the game progresses into full Alpha and Beta form.

I got to observe the game for a good twenty five minutes and what I saw impressed the hell out of me. The cockpit of the UH1 looked every bit as good as something from higher end games like LOMAC orForgotten Battles. The cockpit is simply beautiful; every single one of us there was amazed at the look of the virtual cockpit. Crewmen appear to be modeled realistically and go through their activities and motions in a realistic looking manner.

Ground troops appear to look fairly realistic as well. Troops will jump from helicopters, you can fly around and see artillery firing, troops reacting to fire, and firefights between enemy forces and US ground troops. Helicopter interaction appears to already be in the game.

I am really excited about this. The game looks good, the terrain looks good, the aircraft looks good and the person doing the title seems really excited about making a decent simulation. Add to this 1C’s past commitment to getting the game done right and I can finally see a game on the horizon that could replace Longbow 2 as my favorite helicopter simulation. Vietnam fans who have clamored for a real helicopter, not the faux one seen in Battlefield Vietnam should rejoice. It looks like your answer may be here.