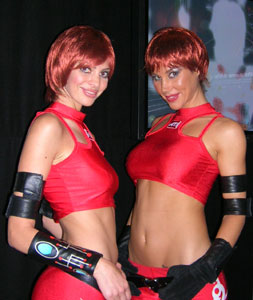 Here’s all these great, detailed 10 page reports from WKLINK and Chunx and guod, but el-zippo from ole 20mm. Hmmmm. What’s that guy been doing out there in the great city of Los Angeles and E3 anyways? Instead of working tirelessly night and day, day and night, interviewing people, investigating and producing terrific E3 simulation news, the latest hardware and software developments, is he:

Hey, I work hard, and I’m free! I’m not easy, or cheap, but free. OK, enough of the silliness, on with the report. It may not be as good or informative or useful like the rest of the Staff’s material, but it’s mine, and I think maybe you’ll get some idea of what I learned here in my first E3 experience.

As Tom Cofield said, we had a very good meeting with Rick Ladomade of Xtreme Simulations International regarding their upcoming simulation, Fighter Ops. And although we certainly did talk Fighter Ops a good deal, we also talked about flight sims in general, where we are as a community, what the future holds and what influence we have on that future. It was philosophical, but I enjoyed the heck out of talking with someone who has passion for their hobby. We’ll keep you posted on Fighter Ops, I think you’re going to like what you see.

At 1C I practically had to pick myself up off the floor as I watched what five months of work could produce. It was a helicopter simulation, from the Vietnam era, and it looked freaking amazing. The shots we took I hope make your mouth water, but they’re nothing compared with what I witnessed first hand. I think we have here a company and a team that wants to do the helicopter simulation right, and although it’s very early, when was the last great helo sim? Are you excited? I am, I can’t wait to see how this turns out. The prospects are mind-boggling. Watch for more on Whirlwind in Vietnam soon at SimHQ.

Tom spent a lot of time with and did excellent reporting on what Scott Gentile’s team has accomplished with Battle of Britain II. I will only add that what I saw makes me very interested in paying a little visit back to early WW II England and seeing what it was like in the skies over London as Spitfires and Hurricanes engaged Me-109’s and Me-110’s in a battle that influenced the outcome of World War II and changed history. Very cool.

And the prize for Most Embarrassing Moment in Show goes… to me! Thank you. Thank you, one and all.

I win for my head-to-head total waxing I took at the hands of Chunx in the CH Products exhibit, flying Pacific Fighters. I wish I could say I stayed in the air with him for a little while, that I evaded the streams of lead from his Spitfire with a decent split-S or a break turn. 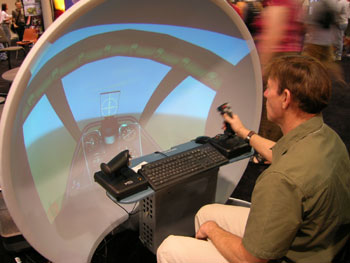 Anything, everything that spells “dog fighting”, but no. Instead, I had a horrible time just staying above ground level. You know, that awful thing where your aircraft departs from normal flight and exchanges it’s nose for the tail, or worse, a nice round-and-round flat spin? Yeah, that was me all right. To start with, I brain-pharted and chose a P-51 D, then I decided that the turning fight was “all mine!”. Nah, not happening. To quote someone who knows a lot more than I ever will about this stuff:

“Things can become slightly complicated by what can only be called the unrealistic suicidal tendencies of the average flight sim pilot. What I am referring to is the unnatural desire for the average P-51 pilot to start a dissimilar air combat with a neutral position and similar energy levels before engaging. No P-51 pilot worth his salt and certainly none who lived very long, would engage under those circumstances… So how can you fight in the P-51 when forced into a Co-E situation against a better angles fighter like the Spitfire? If you only want to live, the answer is simple, blow through the merge fast (possibly taking a head on shot) and refuse combat.” (Big acknowledgment kudos to Leon “Badboy” Smith for the loan of this highly appropriate material)

That description fits me perfectly. I have unrealistic suicidal tendencies, the unnatural desire for dissimilar air combat, all of it. Except that I’m not an average sim pilot. Nah, not happening.