While at the Aerosoft display I got the chance to meet Tim Court who is working on developing an entirely new railroad simulation called The Trainmaster Train Simulation. This gentleman is really excited about this new game and from what he is telling me MS Train Sim fans may actually get the new train simulation that they want.

TTS is going to have many of the improvements that modern video cards bring to the table to include dynamic water and sky effects. The graphics of the game will be much improved over similar simulations. Some of the cars that were shown in the game have some amazing levels of detail, the Burlington Northern cars that I saw really looked a lot like the cars I remember as a kid growing up in central Illinois. Granted they didn’t have the graffiti on them that the real ones did but they showed the weathered green look that BN cars had after years in the son.

While the game is planned to look good the game is going to shine with its physics engine. Tim stated that there are multiple individuals working on the game that have their doctorates in physics. This game was originally thought of as an aid to railroads for their training so the idea is to make a game as physically close to real life as possible. What this means is the group plans on making a simulation that as closely approximates real engines and the difficulties running them as possible.

Like FS2004 and MSTS the game plans to ship with the capability (read SDK) to add new lines, cars, trains and scenery to the game. Folks that have the software that can recreate trains in Microsoft’s game will be able to do it as well in the Trainmaster Train Simulation. What this means is that the game should quickly get a community of simmers that will add their favorite engines and companies. Anyone who wants a virtual CB&Q set in the 1940’s theoretically should be able to do that. This also means that there will probably be a robust add on market for the game after it is released. 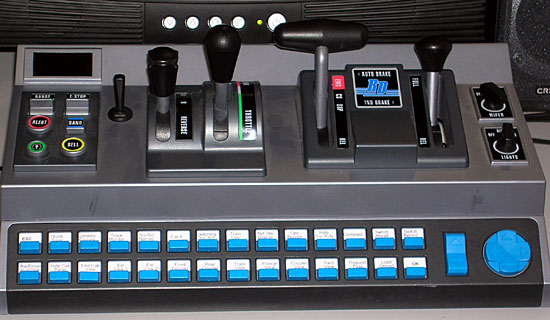 When asked about the release date, Tim just smiled and said ‘After the Holiday.’ He didn’t say what holiday it will be after so it could range from Memorial Day (next week) to Valentine’s Day (next February). Essentially it means he can’t really pin down a decent time frame. It is still in fairly early alpha so I can understand that.