AMD’s Radeon HD 4800 series has been an unqualified success for the firm. The HD 4850 and 4870 boards, priced in the $200-$300 range, brought amazing performance and feature sets and immediately reshaped the competitive GPU landscape. Despite these parts’ bang-for-buck value, though, NVIDIA was still able to claim the single-board performance crown with their new GeForce GTX 280. Yet the GTXs are based on large, power hungry chips and AMD has publicly stated a lack of interest in pursuing higher levels of performance through such designs, instead reaching for the bleeding edge through the use of dual-GPU boards comprised of smaller chips. Thus AMD seeks to grab the performance crown away from NVIDIA today with the launch of the Radeon HD 4870 X2.

As noted in SimHQ’s HD 4850/4870 performance previews, the entire Radeon HD 4800 series is based on AMD’s RV770 chip. This ASIC is relatively small in die size (256mm^2) in contrast with current products from NVIDIA, giving AMD more economic leeway and flexibility when designing a high-end board like the new X2 compared to a part like the GTX 280. Why? Defects in manufacturing rise exponentially with die size increases, and a defective chip is obviously a waste of money for any company. And two RV770 GPUs are still smaller in size than a single GT200, so the current cost of producing an X2-style board is less for AMD than a single GTX is for NVIDIA when considering the costliest component on a graphics board: the GPU. Furthermore, a single RV770 has shown itself to be rather competitive to the performance levels of the new GTXs, so placing two such GPUs on a single graphics board effectively doubles the potential performance (twice the stream processors, twice the bandwidth, twice the texture and ROP units, etc.). Yet theoretical performance is just that, and informed readers are aware that multi-GPU solutions also have drawbacks; not all games scale well in performance when running under multi-GPU setups, and those that do scale rarely see a doubling of the rendered frame rate over that produced by a single GPU. 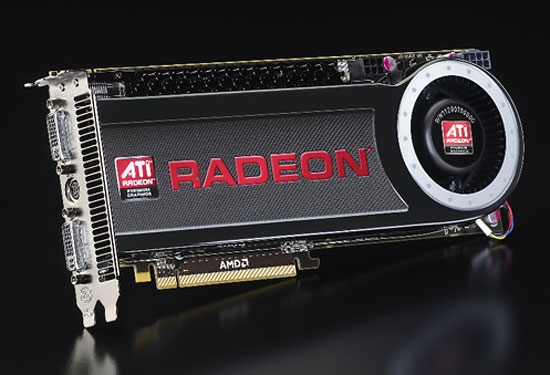 The RV770 chip was designed with better inter-communications between GPUs in mind, so according to AMD scaling should be improved compared to previous X2 products. Also, the PLX bridge chip is a second generation unit and is PCIe 2.0 compliant, enabling 21GB of aggregate bandwidth among the two GPUs (and obviously including the PCIe slot itself). The PLX bridge chip is situated on the board between the two RV770 chips. The Radeon HD 4870 X2, like the HD 4870, is a dual slot part, but whereas the latter requires two 6-pin power connectors and is 9.5” long, the X2 is 10.5” long and requires an 8-pin and 6-pin power connectors. In addition, the X2 has 2GB of GDDR5 memory onboard, 1GB per GPU. This essentially doubles the frame buffer size compared to a standard HD 4870, something worth noting for those with high resolution displays that might find themselves limited at times by 512MB. Marketing at any company likes big numbers, it makes their product look better, and AMD is quick to boast of the 230GB/s of memory bandwidth the HD 4870 X2 brings to market, the 1600 stream processors, the 2.4 teraflops, etc., but bear in mind that these aggregate numbers are effectively split between the two GPUs since CrossFire now almost universally uses AFR (alternate frame rendering). 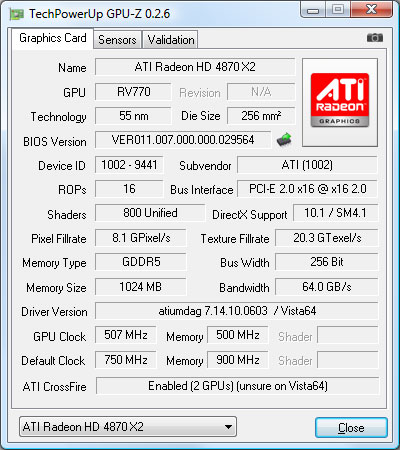