Silent Hunter: Wolves of the Pacific was tested during an attack on a convoy. All in-game settings were enabled and placed at their highest options. 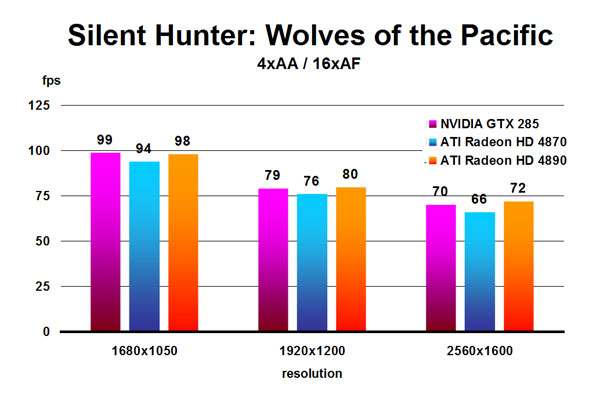 The latest Ubisoft sub sim is pretty much a wash among the three GPUs tested, though not surprisingly the Radeon 4870 trailed behind the newer boards.

World in Conflict includes its own benchmark test, which we used under the high preset with 4x AA and 16x AF then enabled in-game. DX10 was enabled in the advanced graphics options. 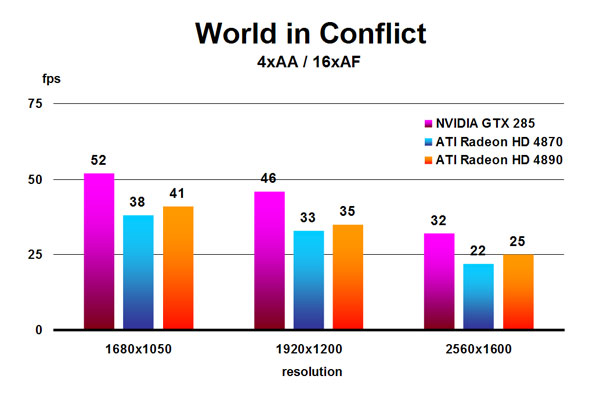 The GeForce handily dominated the two Radeons in this RTS title, outperforming the 4890 by a respectable 25% across the test resolutions. As has been the trend throughout this article, the 4870 brought up the year trailing behind the newer Radeon by a few frames for each resolution. Worth noting, with the high in-game settings used, none of these GPUs produced playable frame rates at 2560×1600 (though the GTX 285 might just squeak by for those with a tolerance for lower frame rates).

Unfortunately for both graphics firms, the recent economic downturn has resulted in AIBs taking a roughly 40% drop in sales for the 4th quarter last year. Such a downturn in revenue will most likely result in a reduction in R&D and we might see a cooling off in the coming months in what is usually an aggressively contested market. Without a doubt both graphics firms are working hard on DX11 designs for this fall’s back to school refresh cycle, though, hoping to align their product launches with Microsoft’s release of Windows 7. Which leaves this reviewer to speculate that the gaming community has with the Radeon 4890 probably seen the last major GPU launch until this fall or winter. 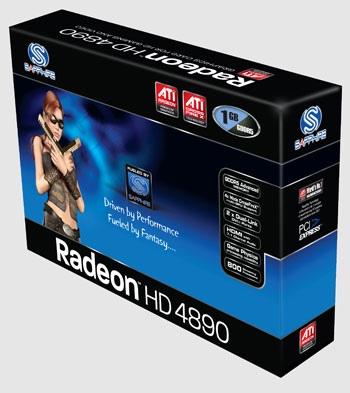 Truth be told, the GeForce GTX 285, as a minor speed tweak to the GTX 280, wasn’t a particularly exciting launch this past January. And the same can be said for the Radeon HD 4890. While consistently outscoring the older HD 4870, the latest Radeon didn’t exactly reach new summits of graphics performance. The GeForce board consistently outperformed the new Radeon in most of the titles used for this article’s testing — the one anomaly being GRID — and often by a significant margin. And with NVIDIA’s die shrink of the GT200 GPU and continued use of GDDR3 memory, pricing on the current GeForce lineup is far more competitive than last year. Perhaps in the end the most exciting aspect of the Radeon HD 4890 launch will be the driving down of pricing on older Radeons such as the 4870; while consistently losing in every benchmark test, the 4870 1GB nevertheless likely represents the best value with its current price hovering around $200. And with AMD aggressively pricing the Radeon HD 4870 at $250 or lower for the default SKU, earlier 4800 products will certainly become less expensive in the coming weeks. For those with large, widescreen displays sporting high resolutions, spending an extra $100 or so on a GeForce GTX 285 is possibly the better purchase, but for the majority of enthusiasts the Radeon HD 4890 is a great combination of performance, features, and price.