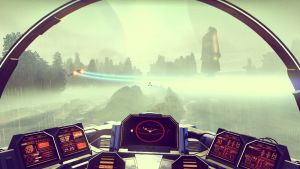 No Man’s Sky is an upcoming space exploration and survival sim developed by Hello Games, the creators of the Joe Danger series. Even though No Man’s Sky was premiered at the 2013 VGX awards and went on to steal the show at E3 in 2014, the game has still managed to stay relatively low key. Even some of my friends who call themselves “gamers” (a deserved designation or not) have either never heard of the game or at best have a sketchy knowledge as to what it is all about. In short, No Man’s Sky is:

A space exploration and survival sim where users will explore an “infinite” procedurally generated galaxy. You’ll explore on land, air, and space via your trusty ship and good old-fashioned feet. The game features seamless transitions from planet side exploration to space exploration and will have a crafting and trading style economy. At the start of the game everything is unexplored, and as players begin to find new systems, they’ll be able to make their mark on the galaxy by tagging their name to new discoveries. This works thanks to the game’s “Atlas Database.” The Atlas is literally a database that all players contribute to and download from which keeps the universe persistent across all players. So, if you discover a new solar system, for example, all future players who visit the area will be greeted with a brief message telling them who found the system. As you might expect, exploration isn’t everything the game has to offer, along with exploration comes danger and No Man’s Sky will pit you against enemies in the cockpit and on the ground, via first person combat. 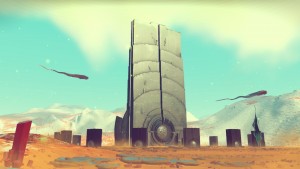 As game details slowly begin to make it to the public, the game’s core experience is starting to take shape, and unsurprisingly, it’s exactly what you’d expect from this type of game. That’s not to say it’s unsurprising in a bad way, but depending on your level of hype for No Man’s Sky, you may or may not be disappointed to learn the economic system is quite simplistic.

This is how it works

Players visit planets and acquire resources which they can either sell at planet-based or space-based trading posts. These resources can also be used to craft “products” which can be sold or used to create other items. Alternatively, players may opt to take these resources, or crafted products, to other solar systems where they may be in more demand and thus sell for a greater profit. If crafting and trading isn’t your bag, you can also ignore the systems all together for a more lone wolf / pirate type playstyle. However, this comes with an obvious downside. By taking on a more disruptive playstyle you make yourself a target for Sentinels –the planetary protectors which don’t take kindly to disorderly behavior. Irritate the Sentinels enough and you’ll find yourself being chased off the planet with blaster fire. If you manage to get to a Beacon and upload your discoveries to the Atlas database while evading the Sentinels then your raid is a success. However, if you die in the process say goodbye to any goods and knowledge you acquired, along with your ship. 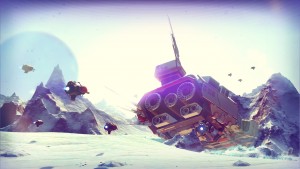 My main concern with the economic system is that it is too simple. The scope of No Man’s Sky is huge, but games like these tend to forget that there is a difference between content scope and content quality. Dragon Age: Inquisition is a prime, modern example of this: a huge game with a seemingly endless supply of things to do and find, but at the end of the day, little of it really mattered and ended up feeling like meaningless, filler content. When developers create an impressively massive world, they often times neglect to fill it with quality content. It’s still too early to know whether this is the case with No Man’s Sky or not. Fingers crossed!