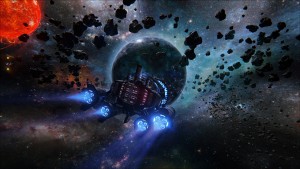 2015 is shaping up to be a great year for fans who prefer to spend their gaming time in outer space. Highly anticipated games such as No Man’s Sky and Star Citizen are just a couple of the more well-known space forays on the horizon, but they are by no means the only exciting content to look forward to. Although Elite: Dangerous launched late last year, you can bet 2015 will continue to be a big year for Frontier Developments’ rising star. Even the community driven Star Trek: Excalibur is set to begin a modular release schedule later this year.

Among all these high profile releases sits the 4-man development team of Fugitive Games. Boasting two former DICE project leads, the newly formed team is set to bring Into The Stars to your PC this summer.

What is Into The Stars? 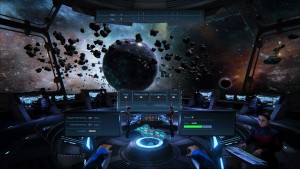 View from the Captain’s chair

Development Director Ben Jones and Creative Director Roy Orr point to The Oregon Trail as a source of inspiration, coupled with the stalwart, sci-fi influence of Star Trek: TNG. As you might gather from that brief description, this means that Into The Stars puts you directly into the captain’s chair, as you call the shots and make the big decisions. Continuing the Star Trek comparison,the crew of your ship play a large role in how the game evolves. There will be a focus on risk/reward when you send an away team down to scout out new planets or ships. Your landing parties may find resources, mysterious artifacts, or even hostile species during their trips; and since the game will include a crew perma-death mechanic, you’ll have to be very mindful of your decisions during these encounters. The threats notwithstanding, there will also be opportunity for exploration and trade among friendlies for those who seek a more peaceful path.

Of course, no space related simulation would be complete without a ship to ship combat system. Into The Stars will use a “volley-based combat system” which promises to require a fair amount of strategy and fast thinking in order to utilize it successfully. Weapons, shields, and power systems will all have to be monitored and adjusted in order to take full advantage of your ships combat prowess during a firefight. On top of this, your ship will have multiple battle stations that, as the captain, you will have to make sure are properly manned by the best crew members available. 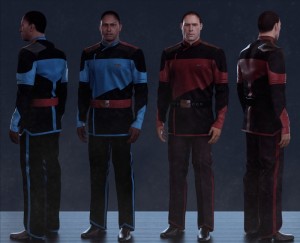 As far as the context for your space adventuring goes, it does its job even if it is standard fair. From the developer:

We’ve been under attack for 10 years now. Every 6 months a new group of them arrives set on destroying our planet and now few of us remain to defend what’s left. The massive ships we’ve built in hopes of escaping them have all gone, save one. As the captain of our final vessel, you must guide an inexperienced crew on a journey fraught with mystery and danger. The fate of the fleet is uncertain and you could well be our last hope. How will you fare once you set out Into the Stars?

In short, you take command of a ship dubbed the Ark 13 and are tasked to “explore a massive solar system in search of a new home for humanity.” Along the way you will have to manage your crew, civilian passengers, and resources, all while exploring alien planets and derelict ships to bolster your effectiveness.

Into The Stars was successfully funded via Kickstarter on February 4th, surpassing its goal of $85,000 to reach $111,274 in total contributions. Similarly, the Steam community greenlit the game, and now the developers are well on their way to a polished release this summer.