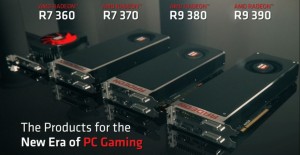 As a PC gamer, graphic drivers are one of those things you just get in the habit of updating, or, at the very least, keeping an eye on from time to time. It’s always frustrating to update to your card to the latest drivers only to discover that some bugs made their way into the release. It’s even more frustrating when your card only gets cursory support from the maker.

Of late, AMD users have been forced to wait patiently for official support of the R9 300 and F9 Fury series’ which have launched during the last couple months. Thankfully, the wait is over and Catalyst 15.7 is now available to download. Better yet, version 15.7 is also WHQL-signed, marking the first time since 14.12 Omega (212 days ago) that AMD has gotten the quality assurance stamp through Microsoft’s testing processes.

Perhaps the biggest new feature of Catalyst 15.7 is Crossfire support for FreeSync. If you’re unfamiliar with FreeSync, it’s basically AMD’s answer to Nvidia’s G-Sync – which keeps the refresh rates between your displays synchronized to help eliminate screen tearing. FreeSync Crossfire support has been long requested and it looks like AMD has finally delivered.

Windows 10 support, while currently limited to the Preview build, is also in the works. Catalyst 15.7’s patch notes specify that another update will come around July 29, the date of Windows 10’s official release.

If you don’t run a multiple monitor set up or aren’t fortunate enough to be powered by an R9 300/R9 Fury, there is still a good reason to grab this update. AMD’s Virtual Super Resolution and Frame Rate Target Control is now extended to some older hardware thanks to the update. Jointly, these settings allow users to play with wider fields of view and smoother edges along with some nice performance increases. You can grab Catalyst 15.7, here.

NVIDIA’s newest update may not sparkle as much as AMD’s, but their hotfix for Driver 353.45 353.49 will definitely be welcomed by users of Sony Vegas Pro. Some folks were having annoying crashing issues when running SVP, but the hotfix has reportedly solved the issue. The update also includes the fixes which were in version 353.38:

Initial reports showed that the hotfix caused some problems on Windows 10 (Hotfix 353.45), but NVIDIA jumped on the issue immediately and re-released the hotfix (353.49) to solve the problems. You can download Hotfix 353.49, here!