Bohemia Interactive, founded in 1999, made its way onto the world stage in 2001 with Operation Flashpoint: Cold War Crisis. Ten years later the company re-released the game, rebranding it under its popular ARMA franchise. Since 2001, ARMA has evolved into a household name for combat sim enthusiasts. In 2012, Dean Hall created the DayZ (mod) project using ARMA 2 and its expansion Operation Arrowhead. Praised for its design and gameplay, the DayZMod boosted ARMA 2‘s sales and exposed even more players to its brand of action, strategy, and cooperation. The mod was such a success that Bohemia Interactive is now developing a standalone version of the game, currently in Early Access.

To Bohemia Interactive’s credit, the company embraced the kind of open development the DayZMod community inspired. Now, ARMA 3, the company’s flag ship title, and Take On Mars, a smaller scale survival/exploration sim project, both enjoy a measure of community driven development. How long, and how well, this kind of open development can be successfully sustained is a topic for a completely separate discussion. What is clear is that Bohemia’s willingness to interact with its community is currently giving the company a good measure of credibility with its players, and that is never a bad thing. 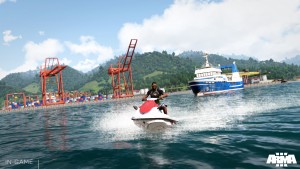 At E3 this year, Bohemia revealed the first glimpse of the next ARMA 3 expansion with a trailer showcasing Tanoa – a South Pacific island boasting over 100 km2 of land mass to explore. The next expansion will expose players to a terrain different from the ones they’ve previously seen. Tanoa features lush vegetation, large landmarks — like the omnipresent volcano shown in the reveal, and multiple smaller islands, each with their own unique features. The map will also be much more densely pack than previous maps, with more evenly distributed locales and fewer “empty” terrain locations. On top of this, Tanoa is being created with modders in mind. There will be big cities for close quarters combat, island battles, and a “very atmospheric rainforest for Jurassicarma.”

While the terrain is reported to be about 75% completed (in terms of the pre-Alpha stage), there is still a lot of work to do before Tanoa is ready to go. Expect to learn more details about ARMA 3‘s next expansion as the 2016 release date nears.

As for the current ARMA 3 release, update 1.48 landed July 16th and brought with it the usual host of minor additions and fixes. You can check out the full details on the SPOTREP #00045, right here.

DayZ has seen a rather drastic downturn in player numbers in recent weeks. Reports indicate that the daily peak player base is currently down more than 50% from earlier this year. The reduction in players, at least from a community perspective, seems to stem from slow content releases, buggy content upon release, and optimization issues running the gamut from minor FPS hiccups to completely unplayable areas. 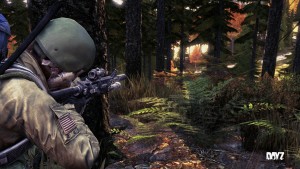 Regardless of current issues, DayZ‘s development has been chugging along, slower than some would like, but moving forward nonetheless. Currently, build 0.57(.128177) is “stable” and brings with it a variety of new items, mechanics, animations, programming, fixes, and a new location. For a full look at build 0.57, click here. This build currently has a rather rough player position desync issue.

On the experimental side of things (the update before the stable update), build 0.58 is facing some problems. The aforementioned player position desync is on the agenda to be fixed in build 0.58, but there is no word on just how successful the devs have been at remedying the problem. On top of this, 0.58 experimental is also dealing with some harsh server performance problems, which are only exacerbating the desync frustrations players are experiencing.

However, we’ll close our brief look at DayZ on a positive note. It looks like 0.58 is adding (or re-adding) some persistence to the bleak land of Chernarus: Vehicle position, vehicle inventory, vehicle parts (sans tires and fuel), barrel locations and inventory, horticulture plots, fireplaces, ovens, tents, containers, and base item persistence are all functioning in the current experimental build. Fingers crossed that the server issues will be fixed soon so we can wallow in the fantasy miseries of a post-apocalyptic zombie wasteland, rather than wallow in our lag and disconnection miseries. 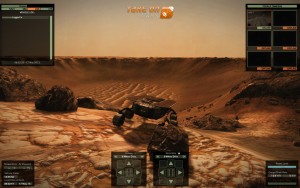 If you haven’t been actively keeping track of Take On Mars, Bohemia’s Mars based survival/exploration sim, then you’ve missed out on a number of updates. Take On Mars entered Early Access in August of 2013, but has finally began its “beta” phase this past July 5th. While the game clearly still has need for more development, the beta is progressing reasonably well.

That said, I’m not sure this “beta” actually qualifies to be a real beta version of the game. Even the developers, in the beta announcement, made it clear that a lot of work still needs to be done, and that they’re considering more development time for more features. While there is no denying the game’s potential — I mean it is definitely fun to roam the lonely planet of Mars, 3D printing constructs, and doing your own thing, but branding the game as a beta at this stage seems more like a move to soothe players’ release worries than anything else. While that’s understandable, seeing as the game has been in Early Access for two years now, it also highlights a major issue with the entire concept of Early Access: the disparity between players’ expectations and the realities of game development.

Regardless of developmental posturing, Take On Mars is shaping up to be a great sandbox survival/exploration sim. Check on the official website, here, for a look at the current changelog of updates to the game.

Command: Modern Air/Naval Operations Patch 1.08
What is a Sim Game?