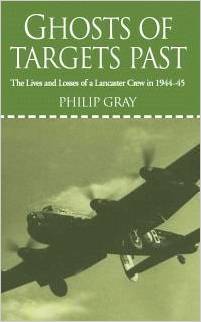 Extremely well written and first published in 1995; Ghosts of Targets Past reads like a ”modern” book as it takes the reader through the experiences of a Lancaster pilot and crew during the closing months of WW2. Beginning in January 1942 with the author’s appearance before the selection board and then going on to describe parts of basic training and air training, in many ways the book strikes me as unique in its portrayal of RAF Bomber Command on its way to becoming the Bomber Command of post war Britain:None of the Auxiliary Air Services Weekend Warriors remain here, neither phraseology such as wizard, prang, old boy, and such. Bomber Command during the course of the war has matured and come of age in a very short time indeed.The early war years with their desperate offensives sought pressed on in outdated Hampdens, Whitleys and Wellingtons using dead reckoning and astro navigation, and bombing by visual or timed runs, have given wasy to and starkly contrasts the technological advances gained almost overnight and described in this book; aircraft carrying huge bomb-loads, and airborne radar guiding pilots and crew in reaching and destroying their target.An interesting observation by the author is that the Americans in their B-17’s carried only a quarter of the bomb-load carried by a Lanc, thus requiring four aircraft and the risking of 40 men every time the British sent out 7 in the Lanc.Another interesting observation is the differences in approach to going to war, between the US and the British squadrons ; Americans preferred the box formations, forming up over their own airfield and keeping squadron formation during the entire raid relying on the combined firepower of the box to repel fighter attacks, the British instead opting for the bomber stream, whereby aircraft were tailing each other in much smaller distinct groups but stretched out over greater distances and still achieving concentrated attacks.The story of the pilot and crew is recounted with a great feel for making the events seem tangible to the reader, and on many occasions events reach out from the pages in rich texture, as when the author describes the sensations and feelings, spending the last few minutes before reporting to the first operational squadron in a pub. Before reporting for ops they are safe from harm, once they cross the fence and enter the base they are entering an entirely different way of life. Yet, even before crossing the actual physical border to squadron life and go through the gate to the airbase, that life, or death rather, reaches for their attention as their future CO happens to be in the same locale as the new crew, returning from funeral services.Philip Gray, in his book describes the inhuman stress and strain of flying day and night raids over Germany, the realization that luck, as much as skill and preparation decides who returns to base and who does not. He notes how letting off steam in tribal rituals after raids eases tension, and inspects the influence of war on relationships.A brilliant book, highly recommended, offering new insights and reading like a work of literature, with a fine sense for desribing how RAF Bomber Command was transformed during the war.

Discuss this review in the forums…