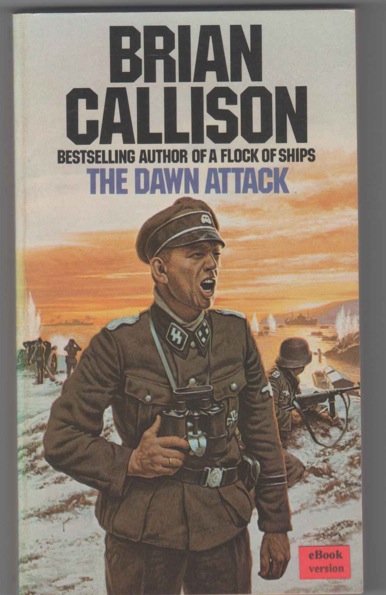 Plot precis: Fictional account of a British combined forces attack on German Occupied Norway, drawing inspiration from the British commando raid on Lofoten in March 1941.The story of the dawn raid is told from multiple points of view, both the German and British side, as well as from air, land and sea. Preamble: When I was a young adult and first began cultivating my fascination with all things WWII, the most remarkable novel I read was ‘Dawn Attack’ by Brian Callison. Until then I had been living on a diet of Sven Hassel, John Steinbeck and Alastair MacLean, all of whom tended to glorify war and make heroes of all their protagonists.Brian Callison on the other hand, stripped away the derring do, the gallantry against all odds, the black and and white good guy/bad guy tone of other writers, and seemed to write about war for what it is – a bloody, merciless, confusing horror in which ordinary men like former shopkeepers and accountants, on all sides, fight and die undignified deaths. Where the grand cause of war is less important than the individual motivation of the lone soldier, sailor or airman that leads him to lay down his life. And where men don’t die with a neat red hole in the side of their foreheads, gloriously charging machine gun nests, but screaming for their mothers in the bottom of shell holes, trying to stop their guts spilling out of their stomachs, in the written equivalent of the Saving Private Ryan D-Day landings scene.So, fast forward a few years. Now I do most of my reading as eBooks, and of course I have lost my dog eared Brian Callison novels along the way. But tragedy of tragedies, his books hadn’t been released on Kindle, so there was no way to revisit them.Until now! All of Callison’s back catalogue has now been scanned and released on Kindle, making this action and adventure giant accessible to a new generation of readers.The Good: Callison is a master of the tactics, tools and technologies of WWII. Whether describing the action as a “C” Class British Cruiser begins to bombard the Norwegian port, the Bf109E4/N pilot completing his preflight preparations, the Blenheim making a smoke laying run, or the German 105mm gun crew pulling themselves out of their shattered bunker to get a shot away at the invaders, his command of military detail can hardly be faulted, despite the breadth of weapons and branches of the services he is writing about.He is also incredibly good at bringing the human side of the battle to light, by focusing the story on a handful of specific combatants on both sides, and giving you enough of their back story to make the reader engaged in the question of whether they will live or die, without so much back story that it keeps you from the action. You find yourself hoping against hope that the shell shocked German private Balke will somehow make it through, while the bullying Obergefreiter Scherer gets what he deserves. You want both the crew of Blenheim C for Charlie to survive, as well as the anti-nazi Luftwaffe leutnant Ficke who is attacking them, but you know that in all literary probability, both can’t make it. The not so much: Because the book doesn’t focus on a single protagonist, or even a small group of them, but rather on the fates of about 20 individuals on both sides, it can take a while to get up to speed with who is who – who is the Commando, who is the sailor, and which of the several Royal Navy and German merchant ships they are serving on or disembarking from.Another thing, missing from the Kindle version which was a definite help in the paperback version, is the lack of a map of the area of operations. The assault on the fictional port of Arvik is a tightly coordinated raid involving three RN ships, a squadron of bombers, and three Commando sections each attacking different targets in the port. Without the map to refer to, it is harder for the reader initially to visualise, though eventually it comes together.A final quibble. The publisher clearly tried to keep costs down when converting these back-titles to Kindle format, and there are several scanning and formatting errors throughout. As an example, someone clearly did a search and replace for the German word for God (Gott) to make sure it was spelled correctly with a capital ‘G’, but with the unfortunate effect that throughout the book the English word ‘forgotten’ is shown as ‘forGotten’. Annoying, but a small price to pay for having these titles available on Kindle at last.Conclusion: Callison can be compared to many current day writers like Dale Brown and Tom Clancy in his mastery of the technology of war, and in his unvarnished depiction of the reality of war to someone like Marcus Luttrell in his memoir of the Afghanistan war, ‘Lone Survivor‘.‘Dawn Attack’ is the ideal introduction to Callison’s body of work, and if you like it, rejoice, because he wrote about 20 similarly engaging novels.I still believe no one alive writes World War II like Brian Callison did.

Discuss this review on the forums…