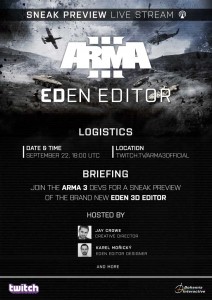 Last Saturday, September 12th, ArmA 3 and Bohemia Interactive celebrated its second anniversary with a thank you to their devoted fan base:

The development team is incredibly proud to still be working on making the game and its platform better. But this has very definitely been a cooperative effort with the tireless community. You’ve kept playing the game, you’ve hosted servers, you’ve created custom scenarios for others and you’ve developed a massive library of amazing mods. Together we have the potential to make this third year the best one yet.

Today, with another nod to the game’s thriving community, Bohemia Interactive announced that a special live stream will be taking place next Tuesday, September 22nd, starting at 1800 UTC (2 pm EST). The one hour Twitch stream will be previewing the much anticipated free Eden 3D Editor update. Eden Editor Designer Karel Mořický and Creative Director Jay Crowe, along with other members of the development team will be demonstrating the new editor’s improvements, features, and overall design approach. “The only thing that’s changed is everything.” 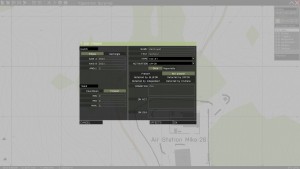 The new 3D editor is just that: a complete overhaul of the old 2D Editor which has become a staple to the ArmA franchise. The new Eden Editor will now allow players to create or edit characters, vehicles, buildings, weather, waypoints, day/night cycles, and static objects in a 3D space, while also retaining all of the old editor’s functionality. The new editor’s interface and layout is purportedly friendly enough for new users to jump in and learn, but powerful enough for old hands to dig even deeper than before. The huge library of custom scripts is still there, and even your old scenarios will be backwards compatible with the new editor. On top of that, the editor’s functionality can be extended through the use of custom plugins. If all that wasn’t enough, the Eden Editor is also integrated into the Steam Workshop which will allow you to directly share and download scenarios to and from the massive database of content.

More details are sure to come during next Tuesday’s live stream, but a release date probably isn’t on the agenda just yet. The editor is slated to release in a future platform update… so at best, I can say it’s coming “soon.™”