Today, the guys and gals over at Bohemia Interactive released another Community Guide video, in cooperation with Dslyecxi (Andrew Gluck – leader of Shack Tactical). This newest episodes shifts gears a bit and delves into the gameplay behind mounting a solid tactical defense.

In the video, Andrew Gluck examines the most essential planning considerations for a solid defense, such as understanding the terrain, defining areas of responsibility, and identifying potential force multipliers. In addition, the video describes what vehicles and weapons are most suitable for defending a location. To increase your odds of surviving in battle, Dslyecxi concludes the video by discussing individual actions, such as positioning and communications, and knowing when it’s time to retreat.

Bohemia Interactive has done a pretty good job of helping new players get a foothold in Arma 3, and this is important on multiple levels, as I’ll discuss below. If you’re interested in learning more about how to play Arma 3 and learn its systems, I highly recommend you check out the other Community Guide videos, as well as diving into Arma 3’s Boot Camp. Arma 3, like most games in the sim genre, has a bit of a learning curve which acts as a barrier to entry. Unfortunately (or fortunately, depending on your temperament!), these barriers often scare new players off, which keeps a lot of sim games from growing their audience. Again, this is a good or bad thing depending on your patience and/or level of gamer xenophobia. A youngster who has been weaned on Call of Duty will probably run into obstacles they’ve never faced before when trying to transition to something like Arma 3. The learning curve runs deeper than simple gameplay system differences, and in fact, the hardest things for newcomers to learn are often outside of these overt systems.

It’s true that CoD‘s loadout system pales in comparison to Arma 3’s arsenal of meaningful weapon attachments. I italicized meaningful because the word highlights the issue at hand. Someone coming from a more streamlined First Person Shooter is definitely used to customizing their loadouts and tweaking weapons with numerous attachments, so the concept of Arma 3’s arsenal isn’t actually that big of a change. What is a big change, however, is the impact that equipping, say, something as commonplace as a silencer, can have on basic shooting mechanics. A game like CoD (I don’t mean to pick on CoD – it’s simply one of the most widely recognized FPS’s out there) may have an indicator that shows a weapon’s range is slightly reduced once a silencer is equipped, but often times that change is so miniscule, it’s barely noticeable mechanically. However, in a combat sim, a silencer can have a pretty big impact on the entire handling of a weapon. Coupled with the already more complex recoil systems of combat sims, and the huge amount of weapons and attachments often available, these complexities -easily- become a bit much for new players.

Now, often times in sim gaming communities, you’ll find a number of people to applaud the complexities of their favorite game and enjoy that it keeps the “noobs” away. And while I can completely sympathize and relate to that attitude, it’s ultimately self-defeating. After all, don’t we want our favorite games to flourish and stick around for years for us to enjoy (especially if they’re multiplayer centric)? In order for that to happen our chosen games have to grow and the developers making them have to see the money rolling in to continue development.

THIS is where the crux of the problem lies: do developers forgo complexity to grow their player base, or do they stay true to their more complex vision and forgo a larger player base, possibly risking a good portion of potential funding? For developers and publishers, this is a very difficult question and one which forces hard decisions to be made.

So, if you’ve stuck with me this long, you might have already asked yourself, “Isn’t this post about Arma 3’s new guide? Why the lecture?” Well, it’s because there is a middle ground to this question, and unfortunately, the middle ground is rarely ever reached. Thankfully, Bohemia Interactive understand the importance of helping new players and have slowly built a wealth of tutorial-like information – this is how it should be. While the question of complexity versus ease-of-access is one every game has to answer for itself at some point, the question is even more important for sim games. Sim games, usually, have a smaller player base and cater to niche populations, and I’m not suggesting that stop being the case. However, games with already small populations continually run the risk of withering, or at least, have much less wiggle room when it comes to surviving mistakes, whether they be PR, development, or simple misconceptions.

What I am suggesting is that in-game tutorials and dev-community collaborative tutorials, such as Arma 3’s Community Guide series, need to become a standard feature for all sim games. It’s true that there will still be a plethora of players who avoid sim games because of the learning curve, but there will also be a portion that see a, hopefully, robust tutorial system and think “Okay, I’m going to give this a go.” Those are the kinds of players developers want to try and bring onboard because they’re committed enough to learn, and probably won’t disrupt their niche community with the “noob-ish” antics veteran gamers despise. 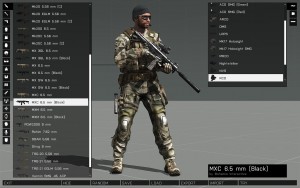 “Well, I learned the game without any tutorial and other gamers, if they want to call themselves that, should be able to do it, too!” I can almost hear some of you saying that as I write this. That argument is so bad, it’s almost not worth addressing. So you have a knack for picking up game mechanics and systems quickly? That’s fantastic for you. Other’s don’t learn so easily, and in fact, it’s common knowledge that not everyone learns the same way. For you, maybe digging into the experience on your own was enough to get you going, but for others, perhaps they’re visual learners who, after seeing something shown to them, will pick it up, no problem.

The point is: Sim games present a lot of complexity to their players in a very short time, and most do not offer adequate (and in many case, none at all) examples of how the game’s systems actually work. Providing robust tutorials give prospective players a better grasp of a game’s workings, assists veteran players with refreshing forgotten knowledge, and also gives the developer a new perspective on their own game’s mechanics. As we all know, trying to teach someone something often ends up teaching us more about the topic at hand, and that could be invaluable from a development standpoint. It’s literally win-win-win.