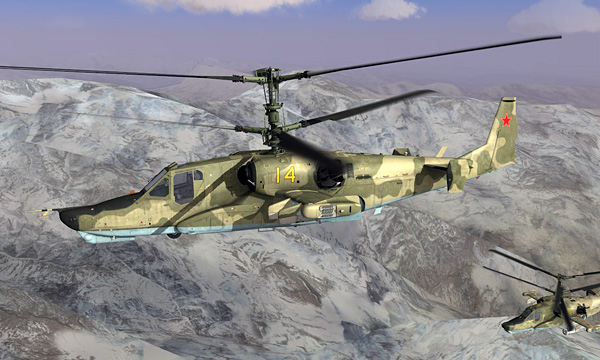 SimHQ got a first hands on look at DCS: Black Shark during the 2007 E for All Show. Producer Matt Wagner was setup in the CH Products booth to demo the latest build from Eagle Dynamics consumer game division. A new series was announced, Digital Combat Simulator or “DCS”. It was announced that DCS would usher in a new era of high-fidelity flight simulations where realism, accuracy and “buttonology” was to be king again. For the study sim faithful, this was nothing less than an oasis. Considering DCS: Black Shark is the first combat helicopter study sim since Longbow 2 was released back on November 30, 1997, simulation fans were more than ready for something new. Note this is with all due respect to the fabulous work done by the EEAH / EECH and Longbow modding communities.

Was DCS: Black Shark the vanguard to a rejuvenated genre long given-up for dead by the general gaming press and it’s supposed mavens? Eagle Dynamics kept the interest level at high throttle by releasing informative “Producer’s Notes” which were an enticing group of videos and select technical pages with some relevant screen shots. Promotion in the Russian homeland had been significant for some time. SimHQ got into the show with three special reports from SimHQ’s very own Chris “BeachAV8R” Frishmuth who was testing DCS: Black Shark along with several other notable flight simmers.

Then DCS: Black Shark hits the home Russian market flying in October! Once released, the rest of the world anxiously awaited the localization process. For the Russian version, Thomas Weiss has a review at his LockOnFiles web site that is very interesting because it compares different points-of-view from several players.

During the course of this review series I will be looking at the English version using release candidate 8 (RC8). It is SimHQ’s policy to only review a final, shipping version of a sim. But after much contemplation, it was decided this version is sufficiently close to the final that we should bend our own rules to get the information out to the community. Once the final English version is available, SimHQ will revisit the sim and report what has changed from this version to the final. SimHQ is also planning some special reports over the next several weeks, so watch for those.

For this series of reports, I will point out the differences between the Russian and English versions, offer flight impressions and suggestions, and provide some nice surprises.