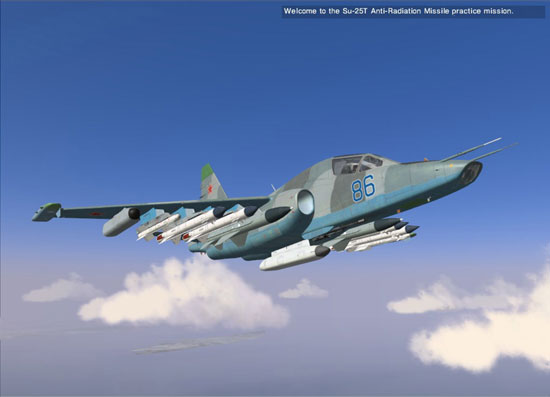 But REAL pilots love smart weapons. And here is where the Shkval shines. You now have the 9M120 missile system, in an eight-round APU-8 launcher, to hang on your wings for a total of sixteen of the deadliest antitank missile out there: the 9A4172 Vikhr, known to the West as AT-12 “Swinger.” Eagle had a lot of fun with the AT-12. It has a weird, sidewinding corkscrew flight pattern, thanks to its odd engine geometry. You can ripple them off like popcorn. Use the SAU-8 autopilot in attitude-hold mode, and put yourself in a shallow dive toward your line of enemy vehicles. The Shkval will find them for you. Ground stabilize with a flick of the TAB key, and see the Cyrillic KC appear at the top of the IT-3M television monitor’s picture. You then dial in the expected target size; eight meters covers most ground vehicles. That way the system won’t accidentally lock anything bigger. Thumb the target box over a tank and wait to see if you get a contrast lock. You’ll see AC come up on the monitor. Turn on the Prichal and get an accurate distance. When the NP firing cue lights up, let fly and quick, slew to the next tank. You should be dead-bang on, range-wise. The most I’ve killed on one pass is two enemy vehicles, but the training track shows three M-48s being snuffed. You can see the tanks scurrying off the road, trying to disperse as the pilot presses her attack home — that’s another change to the AI by the dev team. You can use the same sort of system in the older Su-25, although you have to find targets with the Mark 1 eyeball. Simply use the autopilot, stabilize the bird, and then concentrate on targeting for Kh-25ML missiles or the all-new S-25L laser-guided rocket. Using this method you can pounce on enemy merchant shipping or road-bound convoys all day long.

For the T, the Shkval opens new horizons, with such weapons as the huge Kh-29TE TV-guided missile, and the KAB-500KR bomb. These huge weapons dwarf the aircraft; so big and so heavy that only the two most inboard of the T’s ten hardpoints can be used to carry them. The Kh-29 is Russia’s Maverick-G, and it is used for the same purposes. The KAB bombs are the Russian versions of American weapons like the GBU-15 or Walleye guided bombs, and the Russians use them the same way as well. The KAB-500 is great for hitting ammunition depots, a new building in FC, and one that blows apart in chunks with spectacular secondary explosions when destroyed.

Let us not forget the Cat’s favorite of all air-to-ground missions: air defense suppression. The T is bred for smacking SAMs. Let me count the ways. The first way is in the upgraded package of countermeasures. You won’t find the 1970s-era SPS-141 jammer on the T. Here, you will find the twin-pod, multifrequency MPS-410 jammer system available. Hold it in reserve. Wait for the launch. Then, when your SPO-15 Beryoza starts screaming at you, flip that bad boy on and watch the Patriot coming at you lose track. But turn it back off quick, because the more modern SAMs are nasty and can home on jam. But wait, what about the Osa, or the Strela, or the Tunguska? Here, we have an all-Russian answer in the L-166 Sukhogruz infrared jammer. It’s very effective…. but with one caveat: it needs warm-up time. When you plan your mission, set a waypoint far enough out for your initial point that the Sukhogruz will actually be operating when you need it. Flares and chaff are present as you’d expect and eject from the dispensers located where they’re supposed to come from, at the aircraft’s tail. But the REAL revolution is twofold: first a new weapon in the Kh-58 long-range antiradar missile, and second, the Fantasmagoriya radar detection system.