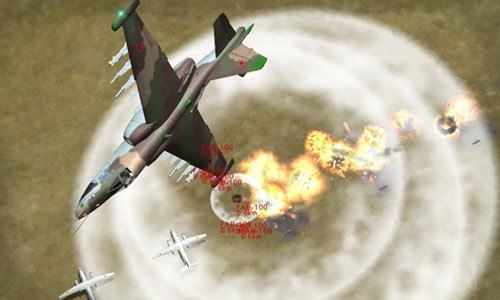 Igor Tishin is not one to rest on his laurels. Since Eagle Dynamics’ original flight sim, Flanker, burst onto the simming scene in 1995, Tishin and his experienced development team have continued to refine and improve their product, and in its current iteration, Lock On: Modern Air Combat, it just keeps getting better. Even being abandoned by their western publisher, gaming giant Ubisoft, didn’t stop this team. Proving their adaptability to adverse marketing conditions by sticking with their niche, modern combat simulation, ED has independently put out the first of at least two planned upgrades to Lock On version 1.xx. I have it, naturally, and it’s finally time to take a look at this interesting new addition to the Flanker family.

To western simmers the upgrade has the unwieldy title. Flaming Cliffs (or FC) was originally released in April of this year by a new form of computer software sales; internet only distribution. Unfortunately the initial FC release was an unqualified two-pronged fiasco, and the company has shown its adaptability by overcoming several at-first seemingly insurmountable troubles. Eagle’s problems began with their Paypal-centered payment system. Buyers of the game were required to register on the Russian-based web site to pay for the title before being allowed to download. This caused problems, since many people didn’t trust the Paypal service for downloading. In addition several simmers reported that they paid for the title but still couldn’t get authorized. Eagle Dynamics’ attempt to get an alternate “Verified by Visa” credit card system in place also ran into initial problems, and this delayed the title to consumers by some weeks. Since then, however, more developments have taken place.

Enter Jason Williams and the NaturalPoint TrackIR team. Lock On: Flaming Cliffs out of the box is TrackIR compatible; in addition it adds features not available in the initial release of Lock On. While it seamlessly supports the TIR system support of the TIR3 with Vector Expansion, it is only partial. It is a 3DOF system currently, not a full six degrees of freedom like some other games. In other words, you can move it front to back, and zoom in on the instrument panel but side to side movements currently aren’t supported (Editors note: Jason at Naturalpoint has said that he is working to attempt 6DOF in the game and hopes to see it soon). But I digress. Simply take it from me that you aren’t really dogfighting in Flaming Cliffs without TIR3. Naturalpoint also solved one of Eagle’s distribution problems… by selling FC as a compact disc, a format most gamers prefer.

Eagle’s other initial teething problem was in its choice of protection scheme for the software itself. They chose StarForce, which is probably one of the most controversial protection titles in gaming today. StarForce installs itself onto users’ computers, and is known to interfere with some DVD operation and SATA drive functionality. Additionally, some CD burning programs such as Alcohol, that many users rely upon have problems with StarForce. Because of the multitude of identified and perceived problems with the copy protection program, many gamers will not buy titles with StarForce protection. Compounding the problem was a limited number of activations, five to be exact, programmed into the StarForce installer. After five installs you couldn’t reinstall the program. Of all the things Eagle could have done to potentially alienate its user base, this possibly was the worst. Many gamers took this as a $35 dollar lease on an add on to a game they already owned. A lesser company may not have survived the resulting furor in the community. Tishin reacted quickly to players’ discontent over Starforce and got utilities up on the Eagle FC site to mitigate the problem. One of these is a must-have, and removes the StarForce hooks from your computer’s registry, allowing basically unlimited reinstalls.