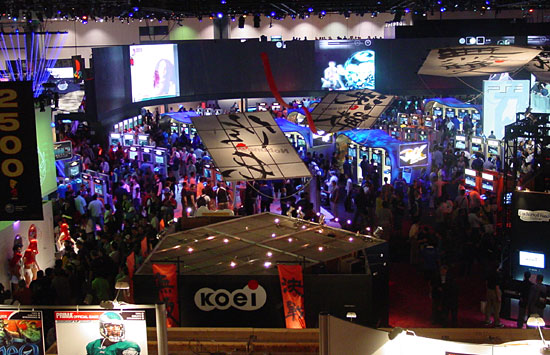 Holy smokes, it sure was a great first day at E3 2005 for the SimHQ crew — in fact, we’d have to say it was the most productive first day this team has had when covering this huge show. Despite having to navigate our way through the most dense crowds we’ve ever seen at this event, we saw a lot, talked to a lot of developers, and learned quite a bit about what’s coming down the pipe for our readers in the simulation genre. Best of all, we got A LOT of hand’s on time with some fantastic new software and hardware — so much so that when closing time came ’round at 6 PM, security had to show up and impress on us SimHQ’ers the need to clear the building! It’s a good thing that security was able to run us off, because here it is 2:30 AM on Thursday morning and we’re just putting the finishing touches on this article (and it’s associated “booth babe” pics).

For E3 newbie Tom “WKLINK” Cofield, this was his first full day at this huge expo and he found the experience quite an eye opener: “Chunx and guod pretty much looked at this as old hat, but I was essentially overwhelmed initially by all the items available to see and do. I saw some things that were very interesting, some things that weren’t, and some things that looked to be total crap. Some things were very noticeable in their absence, which noteworthy in its own right.” 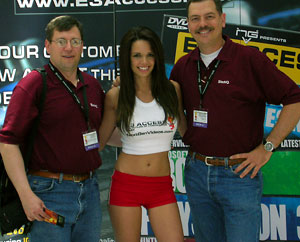 We started out on the main floors (the West and South Halls), looking at some of the titles that will be vying for your gaming dollar this fall and next year. Tom was taken aback by the “consolitis” that seems to have taken hold of software developers attending E3: “I knew and expected it but I was still somewhat hoping that there would be a lot of the old PC format supported. I hate to say it, but expect this trend to become even more prevalent with the advent of the Xbox 360 and Playstation 3 (editor’s note: Chunx doesn’t want to say “I told (Tom) so, but….”).

To be honest I didn’t see a whole lot of software that appeared to be oriented to the PC environment. This was to be expected. Our appointment with Scott Gentile regarding Battle of Britain II is scheduled for tomorrow so expect me to flesh this section out more in the upcoming days.

What I did see a lot of were games that tried to do a lite version of the flight genre, generally for the Xbox or the Playstation 2. A couple of these include Pacific Warrior 2 and Battlestations: Midway. Generally these have a similar appearance in that they appear to be generally third person view flightish shooters. The only one that I know that is coming to the PC is SCI’s Battlestations: Midway a game that really is not a flight simulation, but has some flight simulation characteristics. Pinning this title down to a specific genre is pretty difficult.

In the game you will have the ability to control air and sea forces, either individually or as a group. Getting the time in to actually sit down and flesh out the game is somewhat difficult and it probably is less along the lines of what we would cover as far as what a ‘simulation’ would cover but it looks to be a fairly deep crossover title that has enough simulation aspects to it to actually appeal to a lot of our readers. The graphics look to be top notch, many of the ships and aircraft appear photo realistic and while it has an arcadish feel to it I have been told by Marketing Director David Clark that the game has some depth to it in its physics modeling that may not initially be apparent. I don’t know a lot about this right now but I plan on finding out more.