You can enter the conflict on both sides as either the Commander in Chief, pilot or both. The sim was unique and brilliant but also half-finished due to the fact that the company was stretched for capital and went into liquidation after the release. It was buggy, and demanded some serious hardware to run somewhat satisfactorily.

The Battle of Britain Developer’s Group (BDG) formed. The source code was graciously released and during the next few years the BDG fixed a lot of the issues that plagued the original incarnation of this sim.

In early 2006 Battle of Britain II: Wings of Victory was released by Shockwave Productions in a massively updated version. The whole sim had been updated to DX9, aircraft models had received a well-deserved make-over including real and much improved 3D cockpits, the weather engine had been updated as well, and lots of underlying issues had been solved.

However, not all issues had been solved entirely on release, issues cropped-up or reappeared resulting in some crashes to desktop for users. Shades of the original Rowan version reared their heads like ghosts coming back to haunt, but unlike Rowan which went out of business after releasing the original sim, Shockwave (including the BDG and friends) are still very active and have released subsequent outstanding updates. These are culminated in the newest update, version 2.06.

Late 2005, Tom “WKLINK” Cofield reviewed the release code and we refer you to his review for a more thorough presentation of the UI, functionality and features found in this simulation. 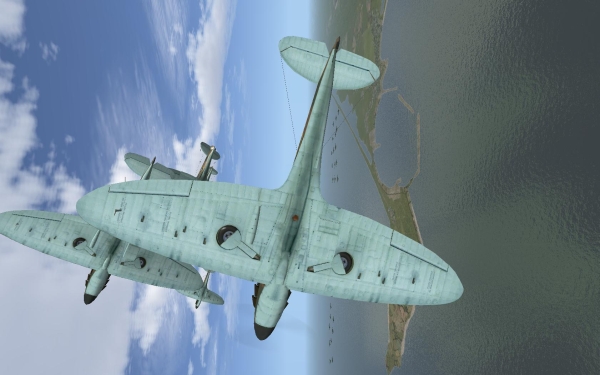 Battle of Britain has always meant an incredible sense of immersion as you feel you are a part of history and in an almighty struggle against an enemy that outnumbers you by more than 3 to 1. As you climb at full throttle to meet the invaders, you find that there are literally hundreds of aircraft in the sky and you are always very busy avoiding mid-air collisions, detecting and evading enemy fighters that latch on to your tail. They gang up on you and take shots at you in turn. You listen to the radio calls for help from your comrades while trying to turn and get your own shot at that elusive Stuka dive bomber, that Heinkel, that Dornier or that Messerschmitt.

As you find yourself in the midst of an enemy formation, the gunners in the bombers do their utmost to defend themselves by unleashing their firepower upon you. If you fly straight and level you’ll get hit sooner or later, their bullets often finding the engine and or the armored front screen of the canopy which if hit will crack, andseverely impair your forward vision.

Should you wish to ride as a gunner on a German bomber you command an excellent and at times terrifying view of the RAF fighters maneuvering for the “kill” on your plane.

All the while the anti-aircraft batteries do their utmost to send up shells into the invading bomber stream. Of course the shells make no distinction between friend and foe, so the ack-ack is nearly always there with its scary thundering booms and black clouds after a burst.

One moment you’re in the middle of the battle, the next you think, “where did they all go?” . After a turn and a dive away from an engagement, you suddenly find yourself alone in the sky.

Giving a Spitfire pilot the opportunity to shoot me down while flying the Messerschmitt 109, I maintained a straight line over the southern coast of Britain. The RAF pilot couldn’t quite close the gap to me and after a few shots, decided to break off the engagement. I guess he didn’t fancy his chances for success, having neither speed nor altitude advantage. 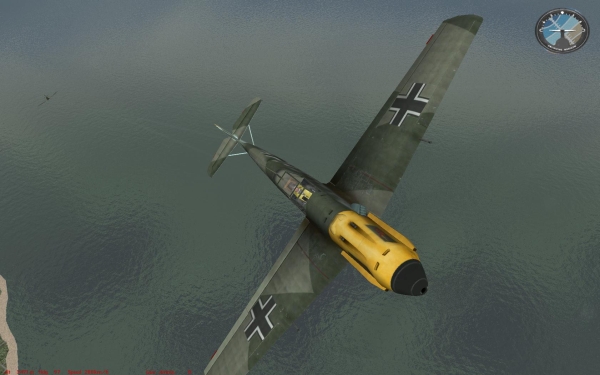