In the interest of fair disclosure, a reminder SimHQ Staffer Scott “Blade 124” Gentile is an employee of Shockwave Productions. Scott did not provide any editing or content regarding this review.

In 1918, the guns on the Western Front finally fell quiet after four years of bloody slaughter. Warfare had been transformed by this conflict started primarily by Austro-German fears of being surrounded by potential enemies which were growing stronger by the day.

Industrialization and mechanization in the late 19th Century meant that you could now effectively kill as well as you could produce autos on an assembly line.

Ground tactics evolved from seeing massively fortified armies dead-locked in entrenched front warfare, to the inception and application of highly mobile warfare, utilizing stormtroopers to perform constant pin-pricks against the enemy and thus break through his lines.

In spite of the Austro-German effectiveness and constantly rewriting the book of tactics, the entry of the U.S. into World War I meant that it would only be a matter of time and the scale of slaughter, before the foregone conclusion of Germany’s defeat, would become a reality.

Peace feelers had been aired and rejected before, this time however, the Germans had no bargaining chips left, although both sides of the conflict thought that they would and could use deliberate vague stipulations and clauses in the peace negotiation documents to their own advantage.

The Versailles peace treaty was consequently not signed until long after the shooting war had actually stopped, and various very stern demands were issued to Germany, from paying massive war reparations to being forbidden by treaty to uphold a standing army of more than 100.000 men. And that was to ensure against the much feared communist revolution.

Dangerous myths started gaining popularity in the Weimar Republic: The Imperial Army had never really been defeated on the battlefield and Germany was not invaded by foreign troops. Had they really lost the war or had they been stabbed in the back? The myths obscured the fact that Germany and her allies were bleeding to death and that the fighting was stopped before more lives would be lost, by having to launch a costly offensive against German territory.

These myths led to a growing desire to “right the wrong of 1918” and to regard the Treaty of Versailles as a piece of paper only, and not as an obligation or contract to be respected and adhered.

This is why, after a short period of optimism in the “roaring ’20s” the inter-war years were really not years of peace but rather a Cold War between the antagonists of the First World War. This is why in hindsight it seems so incredible and incomprehensive that French and English politicians, and public opinion, failed so massively in predicting that hostilities would break out again.

Winston Churchill was one of the few who warned about the dangers lying ahead, but he was widely regarded as a war-mongering has-been sent off to a slightly premature retirement. Sadly, during the early years of Germany’s new ruler, the Lance Corporal and failed painter enjoyed some leniency from the Allied powers as he was allowed to re-enter the Saar, reunite Germany with Austria, and occupy Czechoslovakia, all the while re-arming for an offensive war.

As the danger grew more and more obvious, Britain and France steeled themselves for another shooting war while the backbones of their armed forces relied heavily on outdated equipment and in some cases outdated military hierarchies and structures. Only by 1936 were plans of new and modern fighter aircraft for the Royal Air Force coming to the point that prototypes and first production batches were coming off the plants.

In 1939, France was over-run in 3 weeks by Hitler’s advancing troops using “Blitzkrieg” tactics. The stormtrooper concept born in the latter stages of the earlier war and now refined using close coordination between armored forces, infantry and aerial support. The Poles had witnessed the devastating effectiveness of these tactics.

Miraculously, the onslaught in France stopped just long enough to save a large part of the British Army at Dunkirk. Perhaps because the Nazi’s hoped for a separate peace with Britain, so that Hitler could turn his attention towards the prize he really wanted — the Eastern territories.

As Britain did not wish to make a separate peace with a Europe occupied by Nazi-Germany, Britain was now alone and facing aerial bombardment en masse as well as an invasion.

Barely equipped to fight against the massive Luftwaffe and its 3000 aircraft, Fighter Command had some 800 frontline fighters which included far more Hurricanes than Spitfires.

The Battle for France was now over, and the Battle of Britain was about to begin. 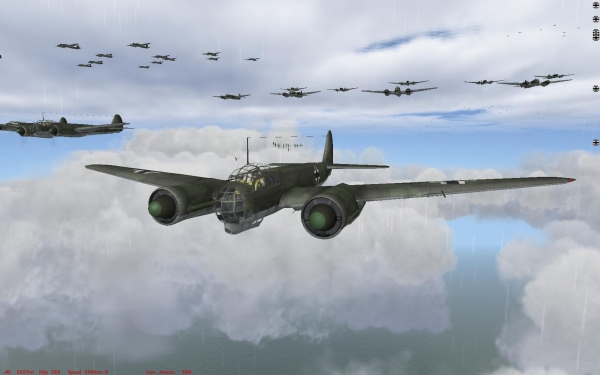