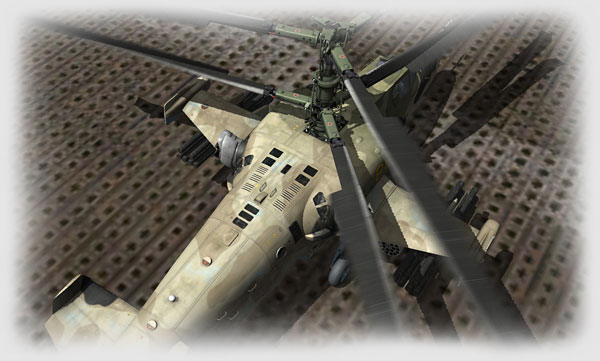 In a hover, the two rotor disks of the Ka-50 are designed so that they produce the same amount of torque (due to drag) in opposite directions in a hover. By design, the lower blades are pitched down about 1.25 degrees from the upper rotor blades precisely so that they match torque production in a hover (at sea level on a standard day <yawn>).

Forces and Moments in a Hover

During forward flight, due to translational lift and the lower rotor working in the downwash of the upper rotor, the upper rotor generates more torque than the lower rotor. Torque acts opposite to the direction of rotation of the rotor blades, and the upper rotor spins clockwise, so the net torque on the helicopter is counter-clockwise, resulting in a left yawing tendency at airspeed. This yawing tendency, left uncorrected, will result in uncoordinated flight (i.e., the ball in the slip indicator gets off to one side). Uncoordinated flight is messy, so a good pilot has to get the nose pointed where he’s going.

In a standard helicopter, swinging the nose is accomplished by stomping on a rudder or “anti-torque” pedal. This changes the pitch of the blades on the tail rotor, making it push or pull less or more, swinging the tail thus the nose around. But, the Ka-50 doesn’t have a tail rotor. Luckily, the designers of the Ka-50 knew this would be a problem so they came up with an ingenious solution.

In the Kamov coaxial helicopter designs, yaw is controlled by varying the pitch of the blades of the two rotor disks. To yaw to the right, the pitch of the blades in the upper rotor disk is decreased which decreases lift which decreases drag which decreases the counter-clockwise (i.e., left-turning) torque. If nothing else was done, the helicopter would yaw to the right (due to the excess torque generated by the lower rotor disk), just as desired, but it would also start to sink due to the loss in total lift. To counteract this, the pitch of the lower rotor pitch is simultaneously increased, increasing lift which increases drag which also increases the clockwise (i.e., right-turning) torque. The change in total lift is zero while the total change in torque is to the right. The opposite process happens for yawing to the left. This is all accomplished automatically by the helicopter control systems when the pilot stomps on a rudder pedal. Cool, huh?

To maintain coordinated level flight while moving forward in a Kamov contra-rotating coaxial rotor helicopter (like the Ka-50) the pilot has to apply right rudder.

Unfortunately, that’s not the end of the story.

Rotor blades slope upwards when they produce lift. This causes the rotor disk, which is pretty much flat while producing no lift, to form a cone shape, or rotor cone. In forward flight these cones lean to one side because of a phenomenon called “dissymmetry of lift”. Dissymmetry of lift is caused by the fact that rotor blades moving in the same direction as the helicopter are moving faster through the air and thus generate more lift than the blades on the other side of the disk which are moving with the air and thus generating less lift. More lift means a steeper coning angle. From the outside it looks like the cone is leaning away from the side of the rotor disk that is headed in the helicopter’s direction.

The side of the cone that tilts more is generating more lift than the other (hence the handy-dandy “dissymmetry of lift” moniker) which creates a banking (or roll) torque on the helicopter. In the Ka-50 contra-rotating coaxial rotor, the upper rotor generates more lift than the lower rotor (as mentioned earlier) which results in a net banking moment to the right.

In addition to the right rudder needed due to the differing torque production of the two rotor disks at airspeed, left cyclic is also needed to maintain steady-state coordinated level flight. Hence the left stick and right rudder we keep finding ourselves using. It’s natural. And it’s right.

Now for the Dark Side

This is not an unanticipated aspect of the design. Mr. Kamov did not have a maximum airspeed warning system installed into his helicopters to help pilots avoid speeding tickets: it’s there to help prevent intersecting cones. Blinking lights and a blaring alarm tell the pilot his two rotor cones are dangerously close to meeting each other. A “V” symbol also blinks on the HUD and Shkval monitor just in case the pilot is deaf or has Scissor Sisters blasting on his iPod.

The system doesn’t, however, limit the pilot from increasing the collective while in this dangerous situation. Increased collective = increased pitch = increased lift = increased coning = see Egon’s safety warning above. Stomping on the right rudder makes the lower disk cone a whole bunch more, also increasing the likelihood of a strike. Or, throw in some strong cyclic controls in just the right direction and voila, clash of the rotor blades!

The slow motion video of rotor clashing in DCS: Black Shark can be seen below. Notice the severe rotor coning angle just prior to clashing.

The good news is that it’s easy to avoid rotor cone intersections. When flying at high airspeeds (>250 km/hr), don’t climb using the collective and avoid strong cyclic or rudder inputs in any direction. If you need to climb while at high speed, pull back on the cyclic while holding the collective steady. The helicopter will pitch up and start to climb while airspeed bleeds off, reducing coning angles. As airspeed drops, slowly introduce collective to maintain / increase climb rate. There’s probably a table somewhere to help pilots figure out what sort of climb rates they can get at high airspeeds before the rotors clash, but I find I can comfortably climb and maneuver at 250 km/hr, saving the higher speeds for straight and level cruises.