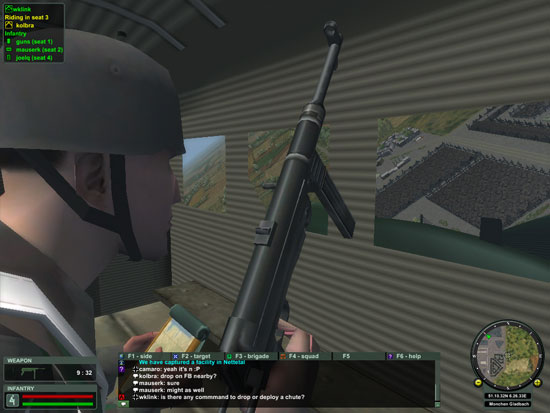 I see two major problems with the infantry setup in the game that make it very hard for me to give total credibility to the infantry experience. The first involves the ability to take a supported position while in anything but the prone position. A good example involves machine gun use. Right now machine guns are absolutely worthless in any kind of an urban environment simply because you cannot set them up to fire from windows or from church steeples. You cannot deploy them from any position but from the prone position. This is a major error in gameplay that really limits the effectiveness of machine guns in the game. MGs should be the cornerstone of an infantry defense; instead they are secondary weapons normally used only in a field environment. This also is a problem with AT weapons. Armor on vehicles tends to be weakest on top but you can’t really take advantage of this by putting an AT rifle in a church steeple (unless you can find a spot where there is no obstruction in front of the floor). Being allowed to set up MGs and AT guns really needs to be a priority for CRS. The second, and more serious problem, involves the use of defensive fighting positions, or lack thereof. To me this is the major weak point of this game. Right now the game is nothing more than a setup of hasty attacks and hasty defenses with infantry and AT weapons setup in the open, exposed to attack. In reality most attacks occurred against an enemy in various states of preparation. While I appreciate the difficulty CRS states that they have in setting up fighting positions, I don’t completely buy it.

Now before someone goes off and thinks I am saying ‘this game sucks’ or something, realize that the criticism I have of some aspects of Battleground Europe are the same ones I have had with just about every tactical shooter out there. In fact Battleground Europe comes closer than most in really simulating the true combined arms battlefield. So while some of critiques are certainly warranted in this game remember the scope of the title and take that into consideration when you read them.

At a minimum there should be foxholes and hasty fighting positions available for the player. Troops shouldn’t be exposed like they are as they take up position. There should be some kind of animation available that simulates someone taking up a fighting position, maybe something that simulates the person being partially dug in vs. being in a full blown dug in position. My guess would be an animation simulating being in a foxhole where the person would select a dig foxhole command. This animation would show a smaller head only profile than would be seen normally. I don’t know, there are smarter people than me but something is certainly better than nothing.

This should be addressed because the infantry is by far the most important force of the game. Air, naval and armored forces are important but the infantry are responsible for capturing all of the objectives in the game. Without them you will not succeed and it is not surprising that the majority of the forces found in the game are infantry related. I find the infantry and anti-tank gun forces the most enjoyable.

I suppose this is as good a place as any to discuss what may be another major problem with the game, at least from the standpoint of some of the players of the game. Right now there is a visible limit on the number of players you can see in the game at one time. Depending on the strength of your machine you have the option of rendering 64 or 128 players at a time in the game. The 128 is a fairly recent addition to the game. About 95% of the time that is more than enough. Yes, you can get into some pretty hairy situations but normally you won’t be facing 128 enemy troops that can range on you. The game supposedly renders enemy troops preferentially over friendly troops to minimize the dreaded stealth rifleman syndrome. We have all been plugged by an enemy infantryman (called EI in the game) and swear he must have been invisible but I cannot for sure say that is the case.

I have heard that the reason foxholes aren’t rendered is because these would have to be placed as objects and this would count against the 128 player rule. I don’t know, I have ideas on how to fix this but this certainly could lead to problems if more and more folks dig in.

Naval operations never really materialized beyond the initial stages in the game. There is little real use for naval forces except around ports and along the shore. The game models small coastal patrol boats and destroyers as well as cargo ships. There has been talk of submarines but it has never gone beyond the discussion stage. To be honest I haven’t had much interest in playing the game and it takes too much time in Farmilles (the small coastal boats) before you can graduate to destroyers. I know DDs can be devastating in defense or offense on coastal towns and maybe sometime I will take the time to learn but I cannot really comment too deeply on the naval operations. If one of the dedicated naval ops guys wants to write something about this I would more than happy to look at it.

Artillery support is missing in this game. Currently there is absolutely no arty in the game. Even such simple things as mortars are missing in the game. I can understand the difficulty of modeling 75mm or 105mm guns in the game (although I don’t see why they couldn’t) but mortars should be in the game. Right now the only pseudo indirect fire weapon available is the rifle grenade, something of a poor man’s mortar. Grenades are modeled in the game but they are pretty lame explode on contact weapons and essentially worthless unless you can hit the enemy directly with them. Clearing a room by bouncing a grenade off the wall is impossible right now, something that CRS needs to work on.

Ok, it really sounds like I am griping about this game. It is true that the game has some weaknesses. Most do and I don’t sugar coat any of the problems in the games.

Still, despite the difficulties I do find this game has the best combined arms gameplay of any game I have tried. To me it is better than Operation Flashpoint, any of the Medal of Honor games, better than anything out there. I liked Red Orchestra but compared to Battleground Europe it pales in comparison. 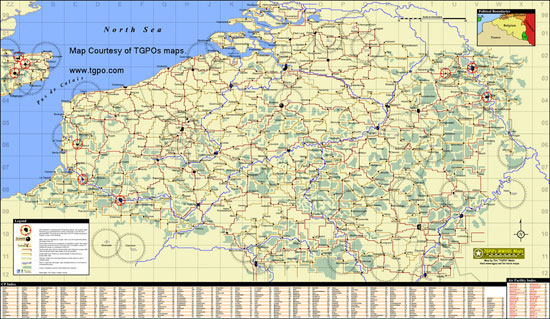 How and why? Two major reasons. The first is the overall size of the battlefield. A look at the large map and you can understand why.

This is literally a full blown map of the entire regions, at 1:2 scale of the real map of northern Europe. We aren’t talking 100 mile by 100 mile maps here, we are talking a map of the entire terrain of northern Europe. This means you can literally walk from the western approaches of Germany all the way to the coast of England (well, take a boat) and not have to load a new map. This is the most impressive portion of the game, something that you will not see in any other game.

The second reason is the scale of the battle. As good as box games gameplay is there are a couple of limitations. Most box games have online support for a max of 64 players. That means you can fight against a limited number of enemy forces. Battleground Europe does not suffer from this problem. When you log in you are engaged in fighting against literally hundreds of other players.

I honestly feel that Battleground Europe is the best combined arms simulation currently in production. It could be better, as I will say in my recommendations upcoming, but it is head and tails above any box simulation in simulating the true armor/infantry combination needed to succeed. If you don’t believe me take a tank unescorted by infantry into an enemy town. You won’t get far before someone saps your tank. And tanks are like gold in this game, you lose armor and you don’t get a new one. It has to be made and sent to the front which takes time.