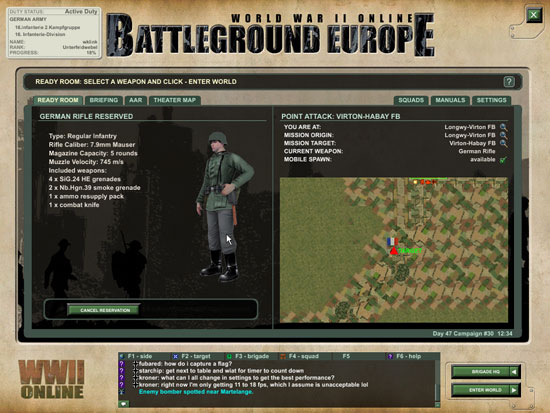 Battleground Europe is available in two ways: box version or download. People can order the game from GMX or from other outlets like Matrix Games or GoGamer.com. The box games are delivered and offer the opportunity to install and play the game. For most games this probably works well but I see a problem with any online only game like Battleground Europe being sold as a box game. CRS was created by some of the same individuals responsible for classic online only flight simulators like Warbirds and Air Warrior. One of the features of these games was the constant expansion of the game to keep it feeling fresh. New aircraft, graphical updates and new theatres were always being added to these older games. This meant that often an older CDRom version was about as worthless as a coaster after a few months. Online components of most box games will have some armor/infantry type stuff but even games like Battlefield 1942 suffer from the relatively small scale and smaller numbers inherent with a box game.

It looks to be the same with Battleground Europe in my opinion. Most buyers of the game will find that a hefty patch will be needed immediately after install before they can start playing. Most veterans of online flight simming take things like this in stride but people new the scene might find the constant patching somewhat irritating. Players who bought the CD thinking they were going to get out of having to download large files will be disappointed as well; they should expect to patch almost immediately after buying. This can be hard for those folks that have dialup connections.

Installing is pretty straightforward. The actual game files and launcher software (called Playgate) installed without a hitch. Now my setup is slightly different than the CD setup. I played WW2OL for several years so all I had to do was download and re-install the game and then reactivate my account. Essentially it will be the same for people who buy the CD but I expect that, since the CD will be out of date for most people, a patch or two will be needed.

To play, go to CRS’s website at www.wwiionline.com and set up an account. I know there is a free trial period for box game purchasers to sign up and play the game but I do not know if you have to put credit card info in. New players who downloaded the game get two weeks of free play before they have to pay; box owners have 30 days to evaluate the game.

Once you set up the account you have a couple of options to enter and play the game. You can enter by directly clicking on the ‘Play Battleground Europe’ icon or you can access it via the CRS website. The game loads via Playgate, an app that confirms your account, checks for updates and starts the game. Playgate is a decent application but I wish CRS would set up a different download system for updates. Players who have been gone for a month might find that they have to update the game three or four times before the game will finally load. Since some of these updates can be 25-30 megs long it can take quite a while to get back up to speed. A system that would update in larger chunks for those of us that get distracted would be a nicer alternative to seeing ‘Update found’ four or five times.

Setting up the game is pretty straight forward. Upon installation you can immediately set up graphic and sound features of the game based upon your system capabilities. Graphical settings can range three base settings to a multitude of customizable settings for those that may not have the best of graphics cards. You have the option to vary the types of shaders used in the game, whether and how you want special effects rendered, and different color options for friendly and enemy icons. Sound options include options for different sound cards and special sounds. This is a game that will challenge a graphics card at times so individuals with lower end graphics cards will want to play with the settings to get the best out of the game.

Once into the game you have the ability to fight for one of three sides in the game. Currently the three countries fighting are Germany, France and England. France and England are of course on the same side and as such you have the opportunity to side jump between the two countries at will. Germany is all by herself (supposedly Italy will be added in the near future) and jumping to the Allied side-and vice versa-means a wait of quite some time. Most players generally stick with one side or the other anyway.

Once you select a side you can select what brigade you want to fight for. The interface allows for people to note which areas have the heaviest concentration of fighting. Some areas are relatively quiet while others have a lot of fighting. Many players have not only developed a loyalty to a side but to a particular area of the front and particular brigades. Individual squads have attached themselves to specific brigades and fight exclusively for them.

Control of the game is customizable and while powerful the interface is still somewhat clumsy, although much less so than just a year or so ago. You have to reassign axis, change key commands as well as input commands and you can reverse any axis in the game. In addition you can specialize your commands based upon individual weapons types and weapons itself if you want to. It certainly takes some time to get your controllers set up, especially if you have multiple controllers. Doing so is worth the effort.

Overall the interface and setup is significantly better than it was just two years ago. People who played the original game won’t recognize it. Gone is the old fashioned ‘is it loading’ question that original players had. You have a status bar that shows you how the game is loading and while the load times are still sometimes long, it isn’t the mind numbing length it used to be. In addition, the ability to configure controllers has been redone and is much more user friendly. It still isn’t the easiest to use but it isn’t the hardest I have seen either. Thankfully you can now see the progress when the game loads. 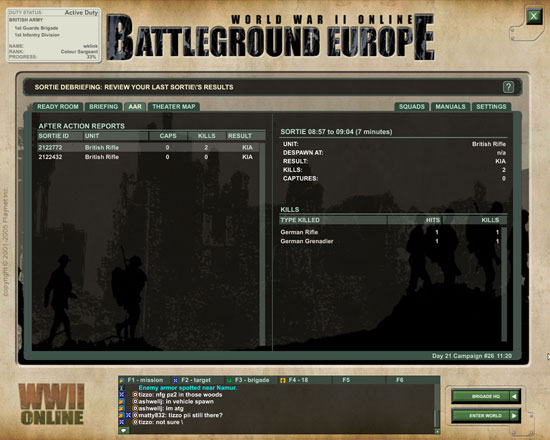