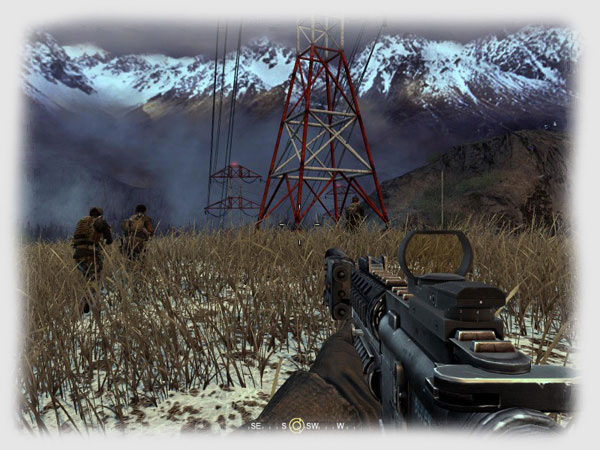 I usually praise the multiplayer and find fault with the single player in my game reviews, but CoD4 is just the opposite.

The single player campaign grabs you by the balls from the word go and does not let go until after the credits, and I mean really, after the credits. Stay around for the credits and you get an extra bonus mission but it has no relation to the storyline.

The story is one of the greatest I have ever seen / heard / played on a computer game. The characters are true and unique, and you build a virtual bond with each and every one of them. Yes, most parts of this game is a “run and gun” and at times you fight incredible odds, but you got to keep pushing, you can’t stop till that next auto save. But it’s not just about running and gunning down the bad guys. I have done more in this game than I could have ever imagined. I stormed a ship, I chased a felon, I sneaked into an enemy compound, I laid in position for over a day to make the “one shot, one kill”. I ran for my life… a lot! I repelled down a burning building. I fireman-carried my partner for ten miles. I fired a stinger, a javelin, a mini-gun, and tons of other weapons. I called in air support, choppers and airplanes in this 10 to 12 hour single player game. Other players claim it takes them 6 to 8 hours to complete the campaign.

And then, after all of that I cried. Okay, maybe not cried, but my eyes did get watery. Then I got up from my computer and said “That was one of the most incredible games I’ve played.”

If Call of Duty 4: Modern Warfare was a book, it would be a best seller.

If Call of Duty 4: Modern Warfare was a movie, it would be a blockbuster.

It is my opinion that everyone who calls themselves a computer gamer should make the effort to play this campaign. You’ll be a star in this interactive movie. You will not be disappointed.

All that gushing praise, and no negatives? I don’t think so Infinity Ward.

Though CoD4 is an incredible story, an incredible movie, an incredible experience, it does have a few game play issues. Now really I guess I can’t say these are negatives because that’s not the purpose of the game. The game lives up to its purpose but some things are just out of whack.

The game is on rails, meaning you follow a scripted storyline. Like I said you’re an actor, someone has already written the story and you just follow it. It is an easy game. A little too easy, though I did get stuck a couple of times. Usually when it was me against the hordes. But then if you jack-it-up to a higher level, it is insanely difficult. There is not a middle or normal setting in my opinion.

Then you and only you push the story forward. You can send enough rounds downrange to destroy a village, but until you move up and reach a certain spot the bad guys will keep popping up in the window. So you can’t really tactically engage the enemy or flank them. To end the rush of enemies you have to move up to the frontline, danger close, and kill them at point blank range.

And then there’s the one guy, or two, or three, that must be your responsibility to kill. Your AI teammates do a great job, and Capt. Price is hard core through and through, battling with you, but certain bad guys are for only you to deal with and they will ignore them so you can get the kill.

I’ve flash banged a room that the team goes in to clear, but they walk right past the guy standing there waiting to engage me. I know this is true, because I threw the bang, but then stayed outside then looked through the window. The team had cleared their targets but not the one enemy 3 feet next to Capt. Price. They’re all just standing around waiting for me to enter and get my kill.

These negatives aside, this single player campaign is a must play.

Oh, and let me add that a couple of hardcore things occur that will blow your mind. These things are some of the same things we are seeing in the news about torture and executions. I won’t ruin anything for you, but modern warfare is not all about good morality.