Infinity Ward is back with the new installment of the Call of Duty series, leaving World War 2 behind them. Since IW acknowledged that they were on track with the new installment it has been one of the most hyped games this winter. Back are the original creators, and CoD4 has received both praise and criticism for leaving the familiar grounds of World War 2 behind them.

There are differences between CoD4 and the others, but just barely, as any one that has played either of the other games will feel right at home. It’s not a huge departure, but the modern setting provides some new additions and the creators have now been able to implement bigger set pieces and are not restrained by history. Multiplayer has received a huge overhaul, making it more fun than before. But I can sympathize with the skeptics, until proven, any one should be wary of any game, but CoD4 is in a sense bigger, better and more intense and exciting than Infinity Ward’s previous games. It’s an assault on all your senses.

Leaving World War 2 behind, we’re getting a new story, new toys and new settings which were unavailable to us in the previous games. CoD4 is set in the Middle East and Eastern Europe, and the story is not set in an existing conflict as Grant Collier of Infinity Ward stated that they wanted an enemy “that would give the western powers a run for their money”, and that they do. The weapons are far much deadlier and the AI (both friendly and foe) is better and feel more human than before. Just watch as your team stacks up near a door and prepares to blow it up and clear the room. Like any other military-themed game, you will have a lot of weapons and gadgets to play with, and you can now pimp your weapons accordingly (in both Singleplayer and Multiplayer) with under-barrel grenade launchers, red dots, ACOG-scopes and laser sights (and a impressive NVG effect), so iron sights are the way of the past. 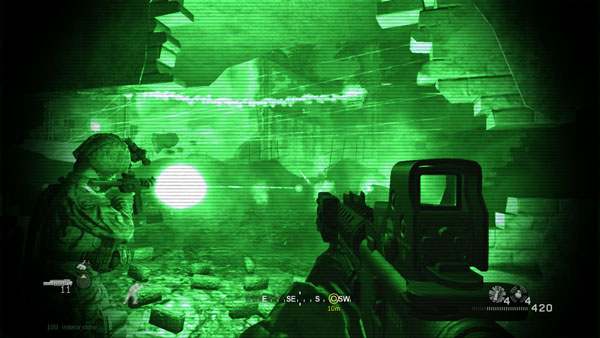 So how’s the story? Well, a Russian nationalist, Zakhaev, aims for Russia to return to its former glory in the form of the Soviet times, something the United States would never allow. He funds a coup in the Middle East, organized by his ally Al-Asad and his henchmen, in an effort to draw away the attention from Russia, it’s not a revolutionary story, but it works for its purpose — to deliver an action packed Jerry Bruckheimer-like production. The British and the US governments have had their eyes on Zakhaev for a long time and soon discover his actual plot and it’s up to the SAS and US Marine Force Recon to get their hands dirty to save the world.

As I wrote earlier, any one that played the other games in the CoD series will feel right at home, like the other games you feel as your part of an war movie on the grandest scale, it’s all about the action: gunning with the FLIR on an AC-130 gunship (the most fun I’ve ever had in an action game!). Battling it through “The Bog” with the Marines. Sneaking behind enemy lines at Chernobyl in a SAS sniper team. One part has you with a mounted sniper rifle with the target far away, and to be able to pull of the shot you need to compensate for wind and the Coriolis Effect. There are some truly memorable moments in the game.