Recently I had the opportunity to revisit the Smithsonian Air & Space Museum in Washington D.C. again after nearly a decade. While there are other terrific aviation museums that may cover specific areas in more depth (such as the National Naval Aviation Museum in Pensacola, Florida and the National Museum of the U.S. Air Force in Dayton, Ohio), none has a better cross-section of different eras and spans history as diverse as the Air & Space Museum. Hanging next to the Apollo 11 command module is the Lindbergh Spirit of St. Louis, the X-15, the X-1, and other famous planes. In the same way that many of us had model plane collections hanging from the ceiling of our bedroom, the Smithsonian Air & Space Museum hangs several famous planes from the ceiling of the building. 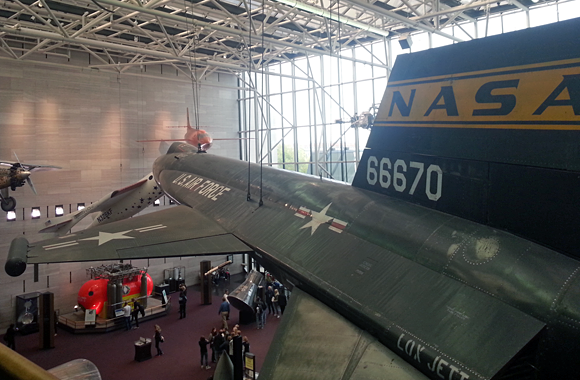 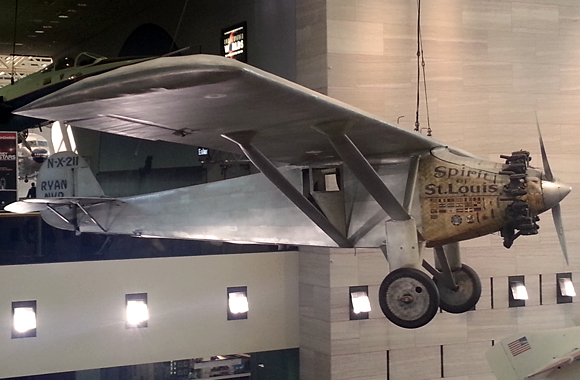 When I first entered the building I noticed a new area that was added since the last time I had visited: “Simulator Rides”. That was my first stop on the multiple floor museum visit. Surprisingly, the line was not long. I’d suspect if it was during the prime vacation summer months it would have been a much different situation. The price was $8 USD per ride, but that was with you sharing the cabin with one other pilot. Naaah, I’ll go solo. That cost $16 USD for the short few minute ride. Expensive, but sometimes ‘ya just gotta say…  So I walked over to the entrance of the station and was told to put everything in my pockets in the assigned locker. I was also told to take off my jacket, and hang it there, and step over to the module.  The module was perched on hydraulic legs and as typical with full motion simulators, it was a closed cabin. After a few minutes of practice with the 4-button stick and throttle (another smaller 4-way stick) outside the cabin, and some orientation by the cheerful attendant, it was my turn to climb in. Once inside I fastened the 4-point harness and belt. No pedals, so she told me where to position my feet and placed the elastic over them. About this time I’m thinking this is way overkill. Then she dropped the “roller coaster” bar over my shoulders. Really? That is necessary? 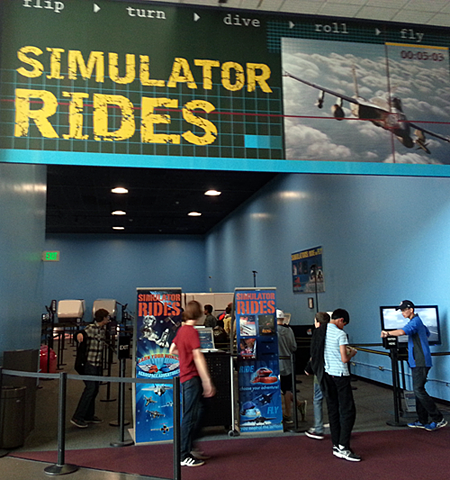 The screen in front of me was one nice big LCD. There was no peripheral views like on a 3-monitor setup. After a short cut-scene, I was place on a carrier deck in an F-4 Phantom. A slight push as I left the deck – certainly nothing like the real deal – but as I pulled up and banked away, I got little time to acclimate or enjoy the “oh that is cool” effects. Right away I got a tight in MiG-21 to deal with. I switched to IR missiles and got the reassuring growl. Splash 1, 2, 3… and as I’m moving in on 4 the lights came on. Awwwww, just a few more seconds please… Nope. The show was over. I’m embarrassed to admit I only got 3 of 4 MiGs. I’ve been in commercial flight and racing simulators before, but this was the first time I had ever been in an enclosed console where you really think you’re going inverted. You’re not, but it still gives you a nice flush-rush the first few times you crank it over. I think the sim was from Third Wire code, and the hit box for missiles was wide. But hanging from the straps makes it a bit tougher than riding a desk. Considering the audience the ride is intended for, it worked well, and it was big fun. I should have spent $32 USD and enjoyed two solo rides out of it. Oh well, next time.

A Variety of Planes

What the Smithsonian Air & Space Museum may lack in depth it makes up in the variety of planes on display. Below is the Patty Wagstaff 260 Extra – displayed inverted of course! 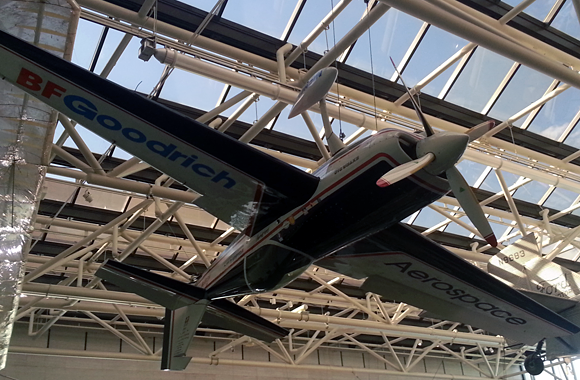 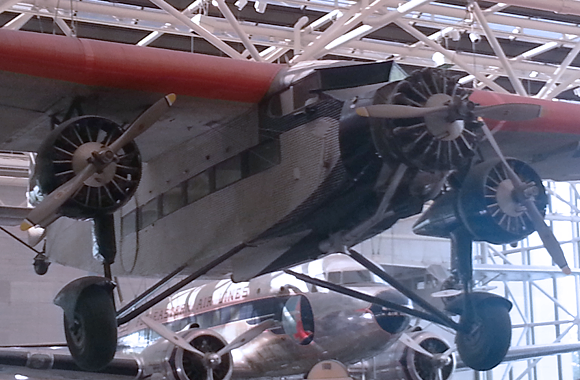 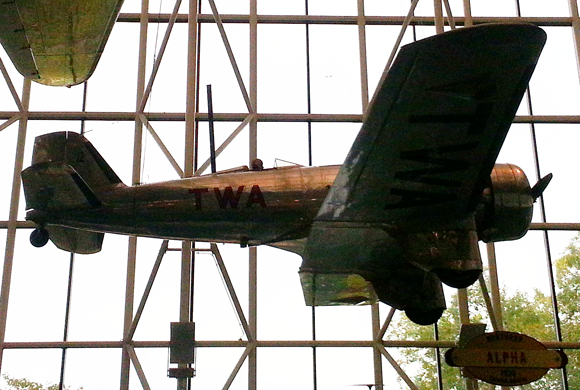 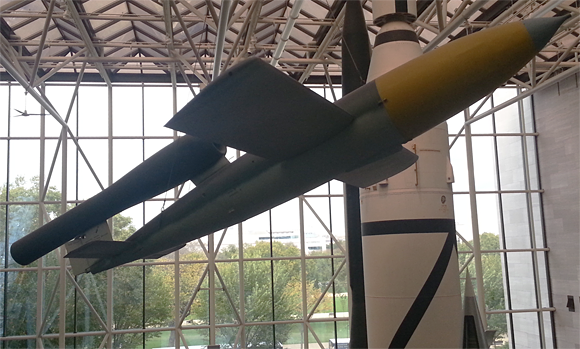 The Wright Flyer was part of an extended presentation on the Wright Brothers and their history. 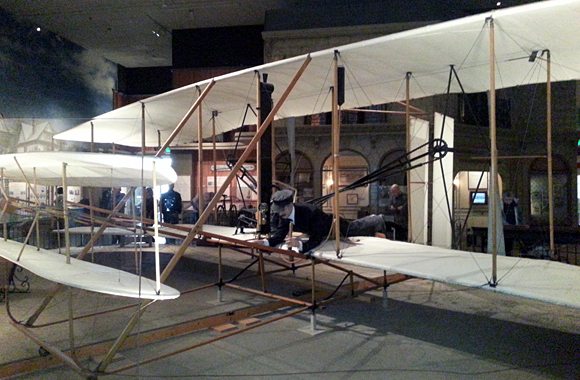 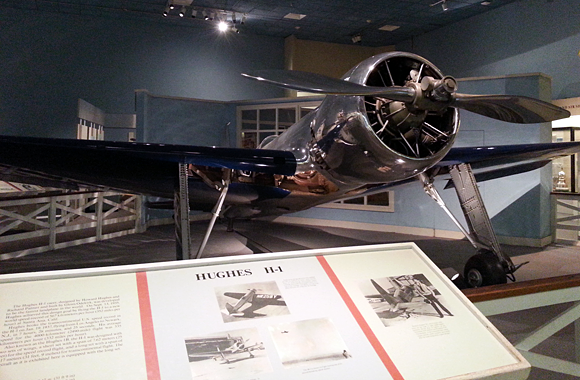 There is an extensive collection of Space vehicles and an entire section dedicated to the US Mercury, Gemini, and Apollo programs. Below are the Lunar Lander and the Apollo Soyuz modules docking. 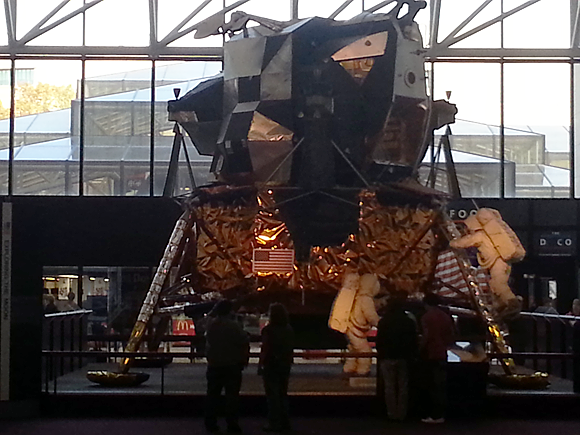 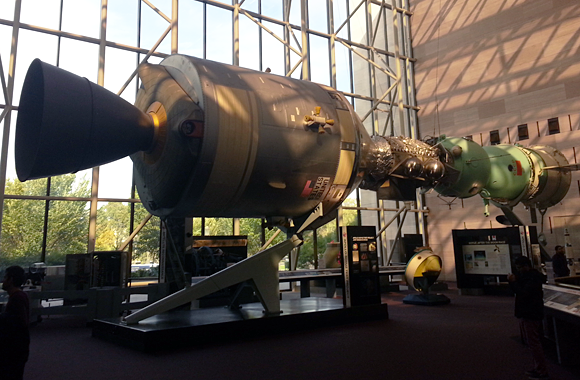 Not surprisingly, there were several drones on display that have been added since my last visit including the well-known Predator with it’s “calling cards”. 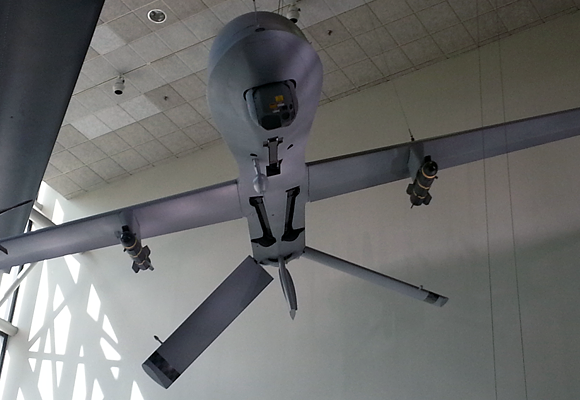 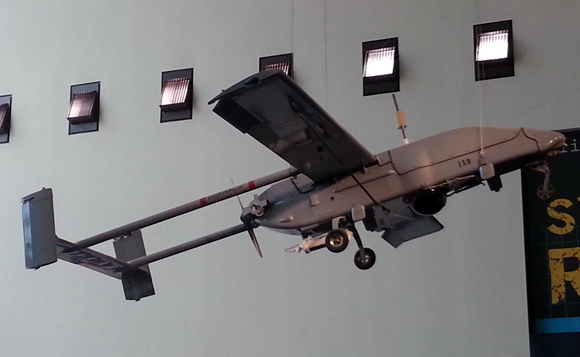 If I had to pick one of the areas I was disappointed in, it would have to be the Naval Air presentation. What is included is quite good, but I would like to have seen at least twice as much presented. Also, very few items have changed since I was there a decade ago. The museum is constantly rotating displays and presentations, and some different displays would have been enjoyable. Nonetheless, as you see in the images below, it is a nice display – there should just be more of it.

The planes are displayed as the below deck area of a carrier. 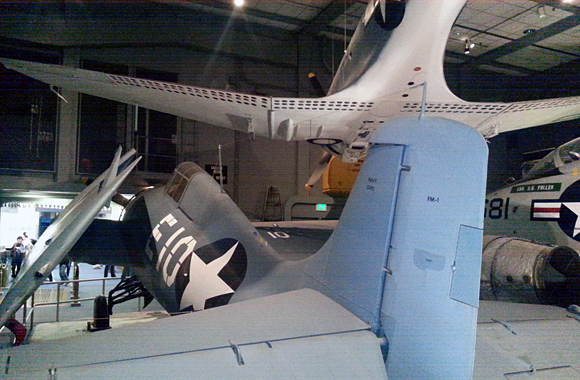 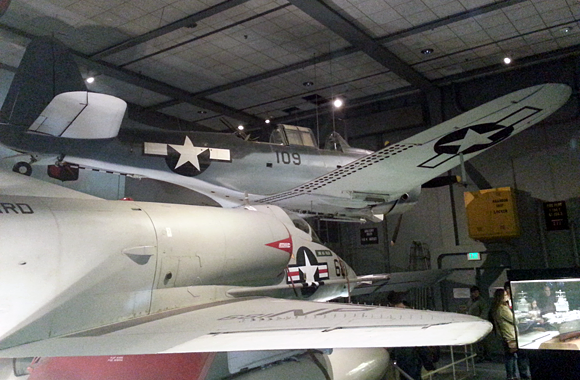 A model of the Enterprise shows the location of planes on a full deck. Amazing model work. 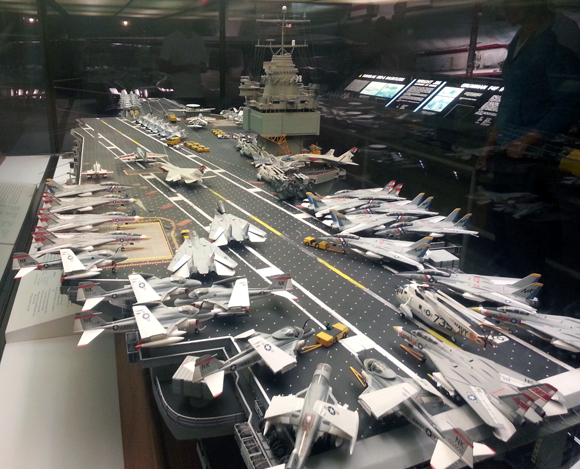 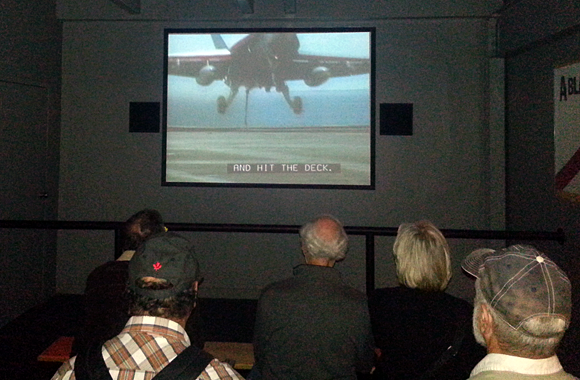 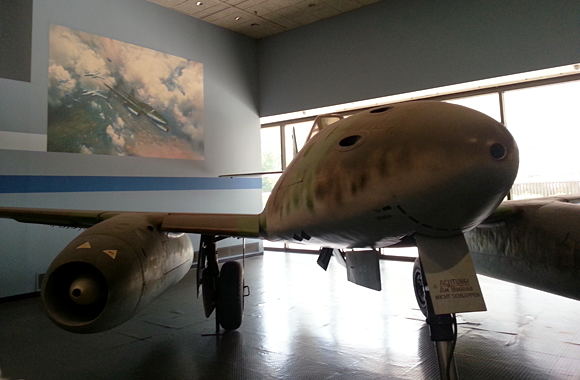 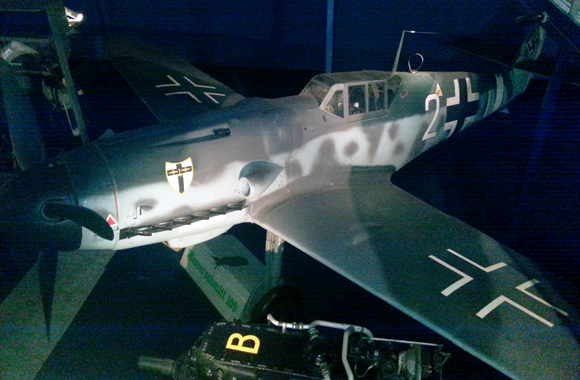 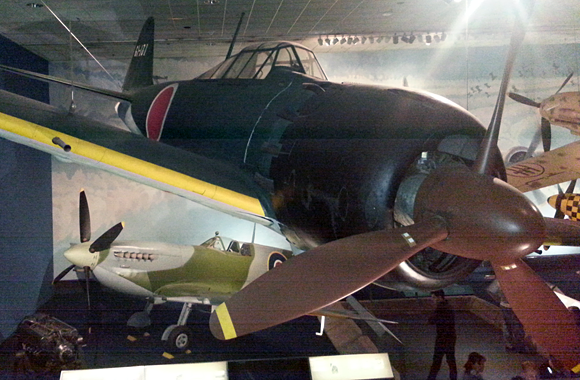 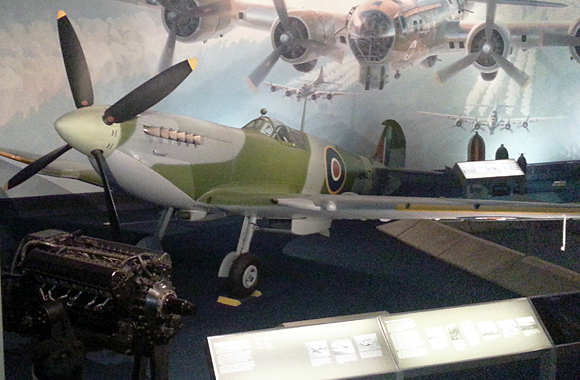 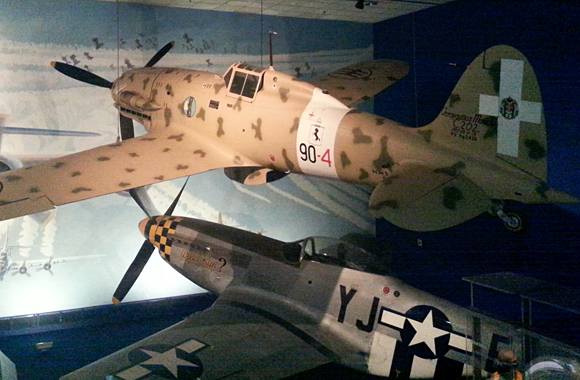 Besides the wonderful planes on display, there are numerous topical presentations representing aviation history. A few I found most interesting are listed below. There are many, many more and you could spend an entire day (or two) just watching the presentations around the periphery of the museum.

The evolution of air combat helmets, and their evolving capabilities. 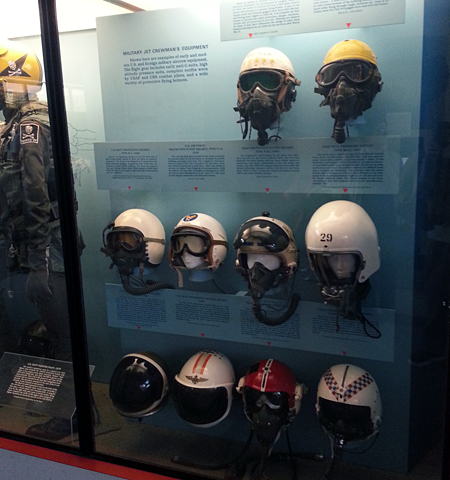 The multimedia presentation on Time and Navigation features aviators from 3 different eras, a maritime navigator, and the presentation navigator describing how the tools, criteria, and precision has changed. 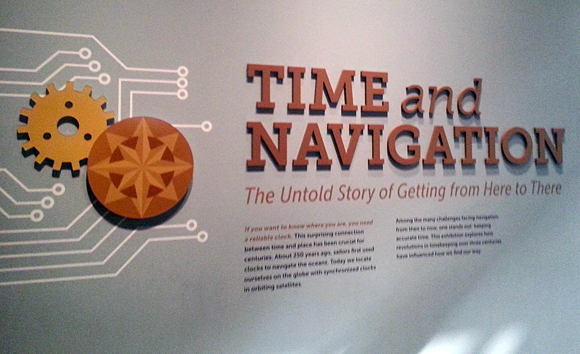 The cockpit of an Airbus A320 explained in detail, then a full explanation of take-off and landing. 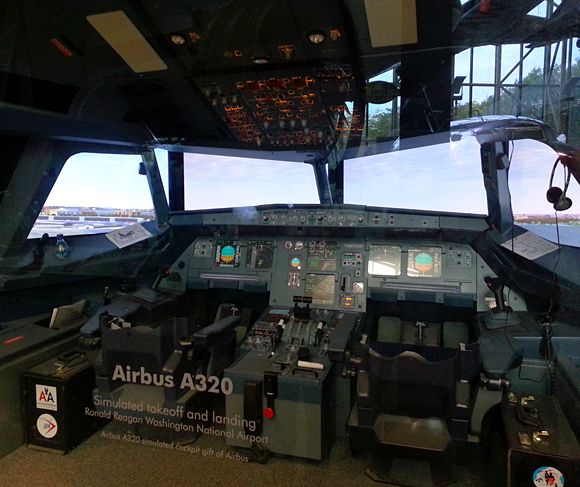 On the wall in the center section is a fitting tribute why the museum exists: “This building is dedicated to all those who have devoted their lives to the exploration of air and space. July 1, 1976.”

Smithsonian Air & Space Museum is a wonderful way to spend the day.