The last time I dove into Star Citizen was back when 2.0 and 2.1 were released. These updates introduced a ton of new content, features, and the beginnings of a somewhat persistent universe. Despite how problematic, technically, those updates were for some, the new content really started to show that Star Citizen’s lofty goals really could be met… and exceeded.

This month Star Citizen made another leap forward with the release of update 2.4. If 2.0 and 2.1 began laying the ground work for a persistent universe, update 2.4 is, in a way, a proof-of-concept update that really shows the game’s potential. Naturally, SC is still in the Alpha stages so everything is very much in a rough state; that said, it’s still very playable and very enjoyable if you understand what you’re getting into.

First off, 2.4 is a huge update that adds, tweaks, and fixes a lot, but we’re going to focus on some of the more important, or major, changes to the game.

As I mentioned, 2.4 is kind of a proof-of-concept update –at least in regards to the game’s persistent universe. One of the core ways persistence is showing its effect, at least in this update, is by the inclusion of an in-game currency: Alpha UEC or simply aUEC. Players can now obtain aUEC and keep the currency from play session to play session—meaning, players can now focus on hoarding money with the end goal of spending it on something down the road. This change, coupled with the many new missions added in 2.4, give players new overt goals to complete, while providing a personal sense of progression. 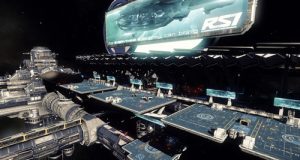 Now, from an outsider’s perspective, I can understand that this simple addition may seem trivial, but as someone who has been checking on the game since its inception, it’s hard stress just how big of an impact this makes from a player’s perspective. Previously, Star Citizen was very much a hop-in-hop-out kind of game. In fact, it kind of felt like an arcade experience at times, although that comparison unfairly cheapens the game’s conceptual goals. However, by simply adding the ability for players to retain earned currency it adds an entirely new depth to the game that was sorely missing. Instead of “I’m going to jump in and play a few rounds in the arena,” or “let’s go hit up a few missions in Star Citizen,” now the game feels like it has some steadfast goals and worthwhile progression to work towards.

This addition goes hand-in-hand with the new currency system, as do many of 2.4’s persistence additions. Now that we’ve got some retainable currency there needs to be stuff to spend it on… and there is! There are numerous shops in Star Citizen which will sell you anything from ship upgrades to cosmetic additions for your character: Civilian Clothing, Flight Suits, Armors, Weapons, Components, etc… it’s all there and largely available for you to buy. Using the game’s Augmented Reality (AR) system, you’re free to preview items before forking over your aUEC.

In a similar vein, the inclusion of retainable currency means that player maintenance is now something you’ll have to contend with. Whether you need to repair gear or replenish your ship, you’ll now have to keep in mind the condition of your items before venturing off to do whatever it is you’re wanting to do. Fortunately, the game now has systems which allow you to specify quantities and components that you want to sink your aUEC into, so you don’t end up wasting money on repairs or refills that you don’t necessarily want at that moment in time. This maintenance also means that replacing ships upon death will set you back in aUEC which further adds another element of risk/reward to the game’s missions and PvP. 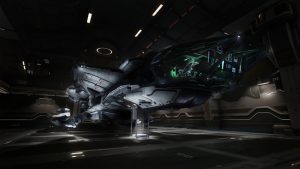 Okay, so, in-game currency and shopping are pretty big deals in terms of a feeling of persistence, but, in some ways, the game’s added customization helps just as much at making SC feel like a more unified experience.

The biggest change here is that the old, clunky holotable is now… gone! In its place is the game’s AR system, which, after a learning curve, results in a customization system far better than anything the game had in its past. Now, instead of having to go back to your hangar and fiddle with the holotable to customize your ship’s configurable ports, players can simply approach their ship and use AR to select highlighted ports and tweak to your hearts content. This system is also extended to Hangar customization, which, it should be noted, players can now select their preferred hangar from the game’s options.

MISC Starfarer – The Starfarer differs from traditional bulk freighters in one key way: it is a dedicated fuel platform. The Starfarer is designed not only to load, store and protect fuel stasis units, it is designed to take in spaceborne hydrogen and then refine it for use without landing. The Starfarer can be used to ferry traditional bulk cargo pods (see diagram) but in such cases the fuel refining equipment would be useless. This equipment is modular and can be swapped out for another mission package for dry operations!

Starfarer Gemini – The United Empire of Earth military uses an adapted ‘rough and tumble’ variant of the Starfarer for their front line operations. The G2M Gemini, more commonly the Starfarer Gemini or ‘Star G,’ trades some cargo capacity and maneuverability in exchange for reinforced armor, increased shielding, more powerful engines and stronger versions of the three manned turrets. The Gemini also includes an optional missile pod, which can be swapped for the fuel intake unit on the ship’s nose (see below for details.) Missile pods can be mounted to either Starfarer variant. 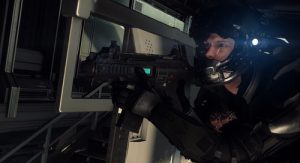 The above changes and additions are just some of the bigger features to make an appearance in update 2.4. However, even without these changes you can expect to find a lot of new things to experience, including:

If it has been a while since you jumped into Star Citizen there is definitely a reason to start the launcher and download the update. As always, be prepared to deal with the usual round of technical problems that come from playing a game in this stage of development.