Until the very last set of updates, one couldn’t set a time delay on bombs and sink ships. Apparently the bombs would bonk off of the sides and sink, leaving the ship unharmed. This has been fixed, but it leads to an interesting debate.

This wasn’t exactly historical in all cases; setting a second or two of delay would allow the bombs to penetrate through the sides of ships before exploding, making the damage more severe. Delays were set at different times on different fronts by different air forces.

I recommend not setting a delay of more than one second. Let’s not stretch things too far from reality, and a proper run will clear your plane even with zero delay. In fact, I recommend learning to skip bomb with no delay set.

Ships have a great firing fan: they can shoot pretty much along the waterline all the way up to nearly ninety degrees vertically. However, their guns are most deadly from around thirty to fifty degrees above the water. I like to think of it as the “zone of certain death,” as any aircraft that lingers there is pretty much guaranteed of getting hit.

As anyone that has practiced dive bombing knows it’s getting away that is the hard part; because of this, we’re going to come in very low drop out bomb, transect the “zone of certain death” as quickly as we can, and get the heck out of there. 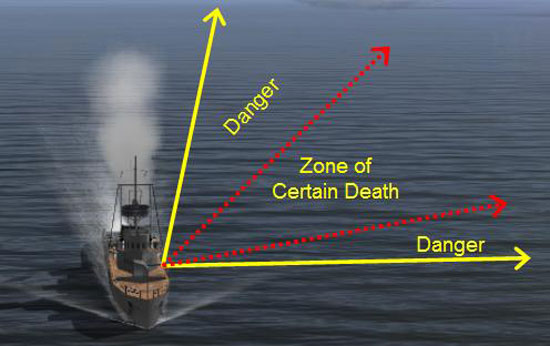 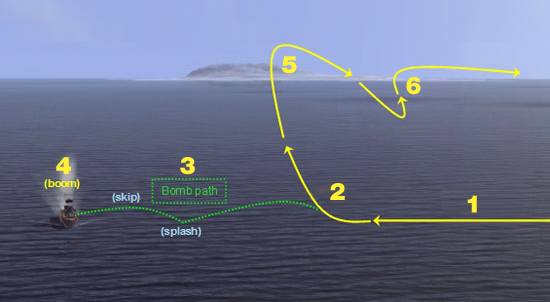 Below is the skip bomb attack from a different set of angles: 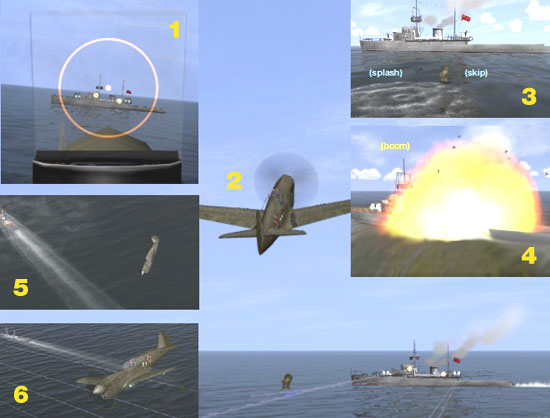 Watch out for bad guys!