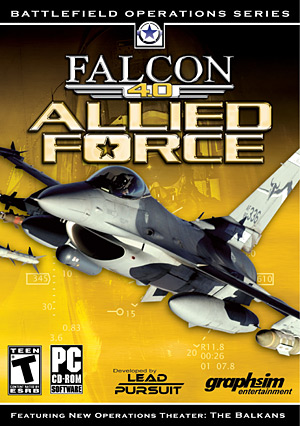 In a few short weeks we will see the next chapter in theFalcon 4 story reach retail store shelves. Falcon 4 was originally presented by Microprose as the “New Benchmark in Flight Sim Technology”, and Falcon 4: Allied Forcelooks to provide some new breakthrough technology of it’s own — and fixes to long-standing F4 problems. We’ve just completed an interview with Executive Producer Joel Bierling and asked him about their flight sim.

A. Lead Pursuit is a group of 20 developers from around the world, united by our passion for Falcon 4.0. We all have had strong links with Falcon over the past five years. This may be the company’s first venture into commercial games development, but the expertise behind us and our knowledge of Falcon is second-to-none.

Q. We know that F4:AF is being produced by the two Texas companies, Graphsim in the Dallas area and Lead Pursuit in San Antonio. Tell us how the two of you got together and how Atari, the owners of the F4 code got together with you.

A. Lead Pursuit was given the opportunity to develop the commercial successor to Falcon 4.0 and we were honored to bring the legendary Falcon brand back to the consumer market. Graphsim has an established history as a publisher and allowed us at Lead Pursuit to do what we do best, develop software.

Q. We understand that F4:AF is Falcon 4, plus the 1.08 US patch, and then recoded and updated in its present form. Is that right?

Our company mantra is stability, stability, and stability. We’ve made tremendous strides here. Our tests on the data have greatly improved gameplay. Julian Onions has taken a virtual chainsaw to the Virtual Universe engine to improve the management of all entities (aircraft, objectives, weapons, etc.) in the Falcon world. The Artificial Intelligence Quotient has jumped 50 points thanks to the efforts of Sylvain Gagnon, Manfred Nelles, and Mike Laskey. There are new hi-res textures, dynamic lighting, and volumetric clouds. Multiplayer has an engine to impress online squads-we recently had ten players battling it out in a busy Internet campaign. The User Interface is so much easier to navigate, and a lot more intuitive.

Q. If so, where does F4:AF fit relatively on the long spectrum of Falcon after-market mods? SP3 or 4? BMS? Free Falcon?

A. Falcon 4.0: Allied Force sets a new standard. All those hardcore enthusiasts who enjoyed the best of Falcon 4.0 over the years will love Allied Force.

Q. Similar question, but just how different will AF be to what Falcon 4’s current fans are playing and are used to seeing?

A. It will be significantly different because of our improvements to Stability, Artificial Intelligence, the Dynamic Campaign Engine, the Multiplayer Engine, the User Interface, and the Graphics and the Campaign Theaters.

As an aside, when you’ve been working on Falcon as long as we have, sometimes you lose appreciation for the vast amount of features that are brand new to Allied Force. So when we were invited by Intel to speak at the launch of their dual core processors in London, it was very exciting to watch the press’s reaction. Allied Force was projected across one of the biggest movie screens in London, and it looked pretty impressive!