What does this mean? It’s simple. For a free fall weapon, if you aim right at the target, you will miss short. The only exception is if you are in a 90 degree dive…and that’s probably not going to be the case! You must aim your aircraft PAST the target…at the target’s 12 o’clock…to take into account the effect of gravity. The following diagram illustrates this point. 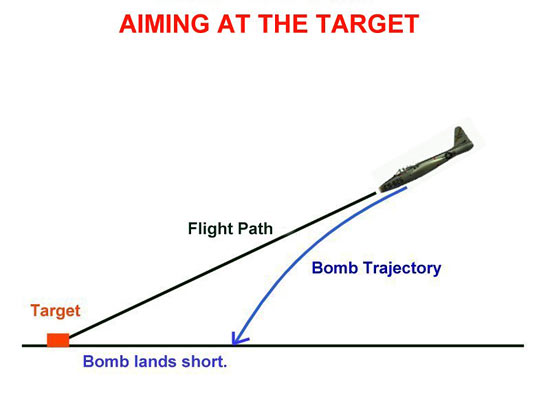 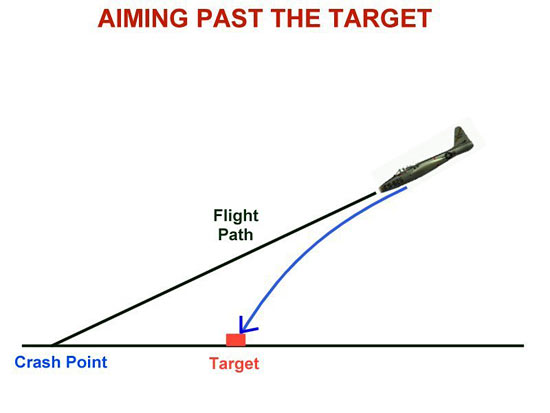 Fig 13 – Aiming Past The Target

The diagram shows our aircraft at release, the point at which its flight path intersects the ground, and the point of impact of the weapon. Here’s where we stop to make one thing absolutely clear. For the given dive angle, airspeed, and release altitude, the bomb is always going to hit the same spot…always. OK…so much for the physics…after all we’re pilots, not rocket scientists…so we’ll move along to what all of this means to us as we sit in our cockpit.

Speaking of cockpits, let’s look at a cockpit view. The following screenshot illustrates this concept. In this picture, the aircraft is in a dive…in this case, a 15 degree dive. 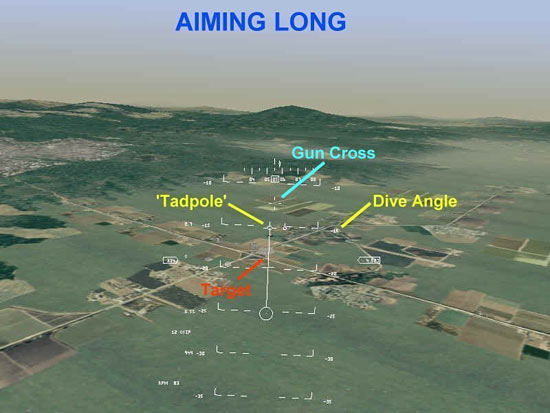 Please note the flight path marker (the ‘tadpole’ or velocity vector) on the 15 degree line. The target is located at the crossroads. The pilot has aimed his aircraft long. He does this by initially pointing the gun cross to the target’s 12 o’clock as he establishes himself in the dive…this gets his flight path in the approximate position long of the target. He then fine tunes this by flying the tadpole to exactly where he wants it. And where, you say, is that? Good question. The answer is coming up in a moment. But first, we need to talk for a bit about the visual tool we use for aiming our weapon…our gunsight or ‘pipper.’