Looking Into the Future of Computing

The Windows XP64 Pro operating system is supposed to be an interim update between WinXP and the new Longhorn operating system due out sometime within my lifetime. The XP64 OS is designed to take advantage of the newer 64 bit processors being released by AMD and Intel. Released at the end of April it is literally in its infancy. Like all new software, it has potential but it also has problems.

My goal here is to do two things. First is to look at the new XP64 system and how it runs with some mainstream software and hardware. Since I am what I consider an average computer user, maybe a little more savvy but not that much so, I am looking at this like someone who just decided to get a new computer with the new XP64 OS. Since it is possible to directly upgrade from XP Pro to XP64 via download this is very feasible for most individuals.

The second goal is to actually look at a title that has been modified to take advantage of the 64 bit architecture and OS. Right now there are very few apps that use the increased capability of the newer processors but this will change. Probably the biggest one that most gamers have heard of is Far Cry. Almost immediately after the release of XP64, Ubisoft’s title announced an updated version of the game with improved graphics, new maps and supposedly improved game play over the stock version of Far Cry. Of course Bubba gave me a copy of this game so I could actually see if it lived up to the hype.

What this won’t be is an in depth look at the Athlon XP64 processor. John Reynolds has done plenty of that on our site, looking at the XP64 series as well as the newer FX5x series of processors. From what he has told me, and from what I have read, the new processors from AMD are more than outstanding. They run cooler than the competition, overclock easier, generally run faster and appear to be a very good value.

So in other words, individuals looking to upgrade in the near future would be smart to consider the XP64 and FX line of processors. Since Windows XP64 will be the operating system in the future and since Longhorn will utilize 64 bit processing it wouldn’t hurt to be ready for this eventuality. 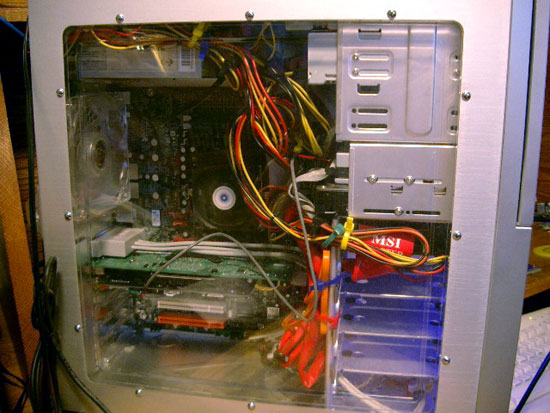 OK, how about now?

Part one of my look at the XP64 processing involves using current applications and hardware under the new operating system. I have a wide variety of newer and older hardware that I use on my older system so I was curious to see how it would work under the new OS. Likewise I wanted to see how some of my favorite games worked under WindowsXP64. Since most people will want to plug in some of their older hardware as well as some older apps I thought it was very appropriate to look at these things.

The Microsoft Windows XP64 Pro is an upgrade that can be had by anyone with a current XP Pro setup. Right now there isn’t a 64 bit upgrade for the standard Home or Media Center versions of XP but I assume that this will be coming in the future. It appears that XP 64Pro is probably developed with business use in mind although many gamers (like me) run the pro version of XP on their gaming boxes.

The X64 upgrade really isn’t there for the one or two year old computers. If you are running an older Athlon or Pentium IV based computer I highly doubt that the OS would even install on your box. The system is designed to take advantage of the new 64 bit processors that AMD and Intel are putting out. If you read John’s article comparing the latest processors you can see that AMD is doing a fine job with their XP64 and FX series of processors, literally kicking the snot out of Intel in most categories.

I am not reviewing the XP64 3500 processor but I can say that I have been very impressed with the processor/MSI motherboard combination and the entire setup that I put together. I haven’t built a computer for almost four years so I was a little tepid about the idea of trying to build a box from scrap. However the Antec Super Lanboy case, 550w Antec power supply and WD SATA Raptor hard drive that Doug recommended all installed into the box with absolutely no problems and, surprisingly, I was up. For once the installation of the operating system actually took longer than the building of the computer.