The first fact I want to emphasize about PC Flight Sim flight models (FM) is they are very hard to accurately quantify. “Realistic” is an extremely subjective description at best and at worst is nothing more than a total guess. It really depends on whose definition is proffered as being ‘correct’. My description of a realistic FM is 1) The physics model/algorithm should respect basic real-life aerodynamic principals, performance and limitations. 2) A specific virtual aircraft type displays strengths and weaknesses appropriate to its real life counterpart, And 3) Specific virtual aircraft types exhibit appropriate and ‘usable’ performance strengths and weaknesses historically proportional to other contemporary virtual aircraft.

How does FB’s FM rate? Well, let me start with a few FM criticisms I feel are valid. The average FB FM is a little less ‘difficult’ than its predecessor IL-2. Some aspects have been toned down notably. The biggest change is the lack of severe torque when power is applied on takeoff and in low airspeed situations. The “Aircraft” should rapidly and aggressively roll in the opposite direction of prop rotation. FB’s aircraft do not exhibit this vice to the degree they should. Is this a bad thing? Depends on your definition of an accurate/realistic flight model, but I personally think this effect could be improved/increased slightly. High Alpha/Low speed rapid throttle changes should be rewarded with an aggressive uncontrollable torque roll and a violent departure. A second area that’s “unrealistic” is throttle response. It’s way too long! The time it takes to go from idle to military power is more like early turbine engines rather than a reciprocating Inline or Radial engine. The rapid throttle response is exactly what killed inexperienced pilots in these high torque aircraft. Since I am discussing throttle response, I guess this is a good time to address the ME-262.

FB models the known Me-262 engines faults pretty well, but I think they may have misinterpreted the engine fire hazard. I may be wrong on this, as I am not too familiar with the Jumo engine, but in all my experience with real turbine engines I have never heard that rapid in-flight throttle movements consistently cause in-flight fire/explosion. A compressor stall… Absolutely plausible, a Flameout… A definite possibility, but not an engine fire. Turbine engine fires are far more likely to occur when there is no significant airflow through the engine; like very high Alpha combined with very low speed maneuvering or on the ground during engine start. The early turbines had relatively crude fuel control units that did not always do a very good job of fuel metering, especially during complex operations like engine start. Rapid/improper throttle movement in this case could cause fuel to “puddle” inside the engine. When it lights off… BANG! An explosion and fire that very well could result in the loss of the aircraft. During flight there is abundant flow of ‘clean’ air through the engine that will generally vaporize and vent the excess gas harmlessly out the tailpipe. It is also true that even with good airflow a rapid throttle movement could easily starve or overload the engine with extra gas and cause a compressor stall and/or flameout. Ruptures of the engine case and nacelle pod, as exhibited by the Me-262 in FB, are not realistic in my opinion. As I said, I may be totally ignorant of the characteristics of the Jumo turbojet engine, but until I see convincing evidence indicating I am wrong I’ll adopt a ‘Missouri’ attitude on this….Show me! 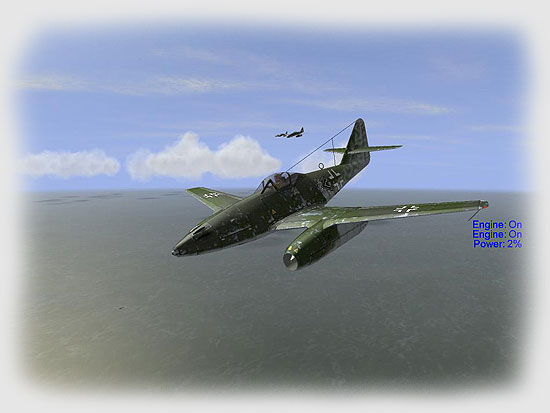 The last area of FM I want to address is the ‘Uber’ I-16’s and the weapons modeling. The I-16 was, by all contemporary and current reports, a fine performing aircraft. The problem I have is that it seems significantly over modeled in both performance and durability; conversely many of the new ‘western’ aircraft like the P-40 and P-47 are similarly under modeled. The I-16 is a pretty old design by WW2 standards and had it really been as easy to fly and had the performance FB attributes it, then what would be the need to develop the later Russian fighters? Joseph Stalin could have saved all the design effort spent on more modern Soviet fighters and increased I-16 production over the 7000 examples that were produced. This leads to my opinion of FB’s weapon effectiveness emulation; I think the .50 CAL Browning MG is way under modeled. Put a short burst of I-16 light MG ammo (7.62 ‘Russian’, a caliber that makes a good deer hunting round but a pretty weak anti-aircraft weapon!) into a P-40 and it burns. Put a LOOOOONG burst of .50 CAL into an I-16 and next to nothing happens. The I-16’s four 7.62×54 Light MG’s appear much more effective than four or six .50 CAL Browning ‘Heavy’ MG’s found in western fighters. I find this very odd considering the fact that the Browning .50 CAL was legendary for it’s power, wide range of projectiles, and accuracy. It was so effective that Browning’s half-inch bullet was used as an air-to-air weapon by the US as recently as the Vietnam War (B-52 tail gun).

An additional FB feature is complex engine management and bombardier/gunner station interfaces. The complex engine management allows the hard-core crowd to realistically control just about ever aspect of operating a WW2 military aircraft. Things like separate multi engine settings, superchargers, mixture, radiators, prop pitch, mags, and fire extinguishers can all be manually used. Be warned, you will be busy… no VERY busy… in a fight operating in complex mode; you will also reduce your performance if you do it wrong! That is VERY realistic! The Gunner/Bombardier function is new, realistic, really well done. The bombsight is complex and takes an effort to learn, but the rewards of watching your bombs destroy a target make the hard work more than worth it. This truly could be the bombing simulation that Microprose’s B-17 “The Mighty 8th” was not… This game works in multiplayer! The only bad thing about manning the bombardier station is the autopilot does not help you much. It will not act like a human (or smart AI) pilot and fly an attack course to your target. You have to do that manually and believe me, that is a real challenge. Hopefully this will be fixed in the near future. 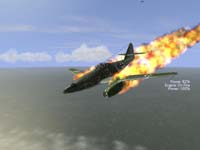 At this point you may think that I do not like the FB FM. If my criticisms seem harsh or overly analytical, please realize my intention is ‘constructive criticism’, in order to identify a few things for improvement. I really like what I see in FB flight models, and there definitely is a whole lot to like. The ‘airplanes’ generally react to the myriad of aerodynamic variables in a believable and realistic manner. 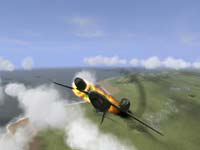 Maneuver the aircraft too aggressively to high alpha and it will react as it should — departure and spin. Spins are appropriate, the recoveries are equally realistic. If you carefully reduce AOA just as the aircraft begins to depart it very well may recover prior to spin entry. That is very similar to actual high AOA flight. If you take hits from your adversary your aircraft will lose some capability depending on where the damage is. The damage model VERY realistically affects performance, it is by far the best I have experienced. No PC game FM can be perfect but this one comes as close as I’ve seen. My overall rating would be ‘excellent’ in the FM category.

I have yet to experience truly realistic AI control of virtual aircraft in any game, especially in the highly complex and dynamic environment of an Air Combat Simulation. I am not really sure it is possible with the technology available to us now or in the foreseeable future. This obviously applies to FB’s AI also. It’s not perfect and I really didn’t expect it to be, but it’s pretty believable and is the best I’ve seen to date. A few AI Idiosyncrasies tend to be frustrating… like AI wingman that sometimes totally disregard flight lead command, AI bandits that can ‘see you’ in clouds, and AI bandits that seem to ignore all your wingman and target just you. And then there are the “dumb” aspects of FB’s AI; like the bandit trapped at your six breaking off the attack when you dive straight down and recover just above the trees. It is almost like he can’t see you anymore. Another odd behavior is when a AI bandit attempts a ‘bug out’, he will keep flying straight and level while you blast away! No noticeable defensive reaction. The opposite is true when you’re trying to sneak up unobserved on a single unwary bandit, they magically ‘see’ you every time just as you close to shoot. Is all this bad? Not really, because in most cases it just makes the game a little more challenging. That challenge makes for very satisfying game play, it’s also great practice in preparation to face human opponents in multiplayer!

The sound effects in Forgotten Battles are pretty good but I think they would be more accurately called ‘industry standard’. Not anything revolutionary, but more than adequate to render an accurate environment to a combat flight simulation. The guns sound real, the engines sound real, and the crashes sound real. The only “Hollywood (meaning goofy or odd) noises” heard are some of the ‘radio’ calls from AI wingman. They’re occasionally silly, but that’s a minor distraction. These ‘radio’ sound files are now in several languages, so if you want to hear only English then all you have to do is copy the English files into all the other language files. That way your Russian wingman speaks to you in English!

The view system is just about the same as most quality Flight Simulations. It’s controlled with either keyboard commands, mouse command, or a combination of the two. Track IR users will be happy to know it should work very well with FB, but since I don’t have one yet I have not personally tried it. The ‘Padlock’ mode is IL-2 standard, therefore it is a little different than most other combat sims. You must be ‘looking’ at the object to padlock it, and there are some other minor padlocking limitations including cockpit obstructions that limit its field of view. I personally feel it is a bit too restrictive. In a real-life aircraft the field of view is much better because of your peripheral vision, and it’s much easier to see and ‘padlock’ a bandit. In FB the field of view is limited to how far an individual can turn only his head. In actual practice you can and do turn/twist your whole body in order to significantly increase the available visible airspace volume. 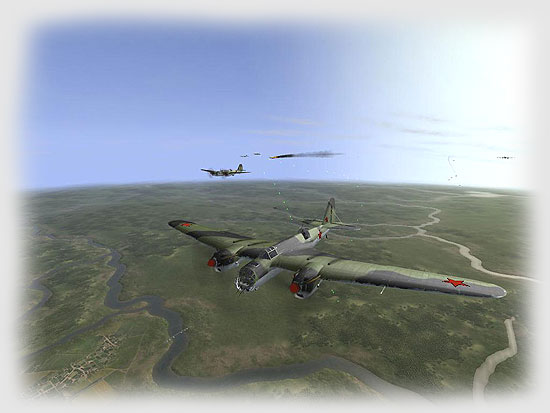 The overall environment, feel and immersion factor of IL-2: Forgotten Battles is outstanding. I have flown military aircraft in northern Norway and the impression of the Finland ‘map’ and terrain set is shockingly familiar. I feel like I have flown over the very same Fjords. The attention to historical technical detail and accuracy really adds significantly to this game. Once again, I find myself stating that this is not the result any one factor, but a combination of the whole package that melds into a very realistic and believable simulated military world. Other than the actual smell of gunpowder and aviation fuel, everything else is there!