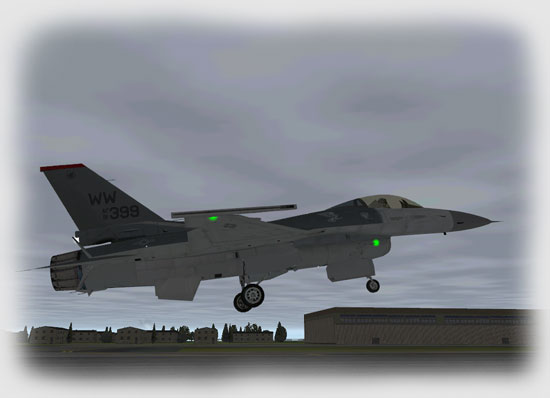 There are some really nice touches in F4:AF that just add that little something to it — especially in the ATC aspect — which I feel has been greatly improved over the original Falcon 4. For example, one mission where I was taxiing out to the runway, I called ATC for permission to take off. I was told to hold short due to incoming traffic so I stopped just short of the runway. As I was sitting there, a huge transport plane cut across my nose and touched down right in front of me. Another example is the stack feature when landing where you have to wait for other traffic to land or takeoff before it’s your turn. You can see it all going on beneath you. It all adds to the feeling of being there and being part of something real.

So far as AI goes, it does seem much improved in Allied Force. So many times in the original F4, my wingmen would not attack targets when instructed, would hopelessly drift towards me and crash into me when flying in formation and generally just didn’t seem to be of much use. In F4:AF this seems to have been rectified and I feel much more like they are alive and part of the action. They don’t hit their targets every time (of course, neither do I) but that’s true in real life also.

With regards to graphics, there isn’t a huge advance on what I am used to, but they are not poor by any means and if I had to pick on anything it would be the terrain detail. It could be improved and given a bit more variety, but it is good enough not to detract from the gameplay. I appreciate that Lead Pursuit’s primary aim was to improve the stability and AI of Falcon 4 — rather than play around with the “pretty stuff”. As far as I am concerned, mission accomplished.

While we are on the subject of stability, I have had one CTD and two lock-ups. All three happened in the first two days of use. I am not sure the problem was with F4:AF. I have had problems with other programs and when you consider the amount of time I have spent on F4:AF — pretty much solid for over two weeks and running for ten hours at a time — I really can’t grumble.

The one big advance I can see over the original version of Falcon 4 is the cockpit. This is stunning. Every little detail such as the rivets with the flaking paint on them and the texture of the pilot’s legs and hands is incredible. I also love how “interactive” the cockpit is. By this I mean the endless switches and buttons that you can actually use. All are mapped out with key commands but I find it much more involving to move around the various panels and consoles and physically click on them. I also find that actually clicking the switches helps me keep track of what I have pressed. This is far easier than trying to remember key combinations (some of which feel like you are playing “Twister” with all the fingers on one hand!).

At this stage I realize I’ve only really scratched the surface of this sim and that there is still a huge amount for me to discover, but my first impressions are excellent and I know for sure that I personally will be spending a LOT of time on F4:AF. I am hard pushed to pick on anything as disappointing and really at this stage I can’t fault it. The only thing, as I mentioned earlier, would be a bit more variety in the ground detail and possibly to build in some visible damage modeling for the aircraft.

It is very difficult for me to try and cover every area of F4:AF in this review, even after two weeks on it. But that is the nature of this sim… because that’s exactly what it is. It’s a sim, not a game. You can’t just learn it overnight. It takes time and patience and the more realistic you set the options, the longer it takes. But that is part of the enjoyment and it is far more rewarding. The first time you manage to successfully lock-up a target and hit it is a great feeling, and suddenly all those different radar modes and OSB switches seem a little less daunting. Gradually it all falls into place and becomes second nature. The more you fly it the better you get and the more you understand the how the systems function. Once you have mastered one area you can move on and learn another. Before you know it, you can fly this thing, hit targets, control your flight and get it home safely. It is only now I am using the realistic settings that I realize just how much I would be missing out on if I were still using the simplified settings. I would certainly say to any newbies looking to get into combat flight sims that this is the one, and in my eyes it is certainly a vast improvement over the original Falcon 4 that I’m used to.

Just remember that you can go at your own pace, learn what you want to when you want to. If you want some action in between lessons, load up a TE or campaign on easy settings as I did. AF caters to all skill levels, so if you are a novice (like me) you can easily get into it. I know the 716 page PDF manual looks daunting at first sight, but after 2 weeks it doesn’t look quite so big to me any more! 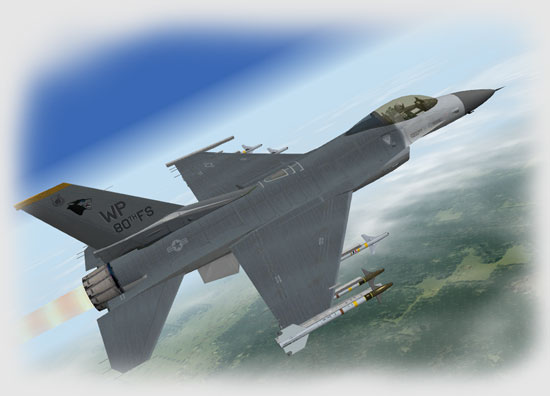 BA_Dart’s parody on Part 1 can be found here.

A New Pilots First Look at Falcon 4.0: Allied Force Page 2
SWAT 4 “Ads”: Why I Am Mad About This
Beechcraft V35TC Bonanza Brittain Autopilot Controller Unit B-4
$19.0