I started a stop-watch at the beginning of the installation process and the file copying took 25 minutes. Unfortunately the 25 minutes is pretty boring, with a slow moving slide-show of screenshots. Far better would have been a manual or some utility where you could start reading up on the features and capabilities of the new program. I suppose software companies are reluctant to put anything interactive up during an install process lest you accidentally hit a key or something that corrupts the installation; I can understand the logic but I don’t have to like it. At the completion of the file copy process comes the dreaded and roundly despised Activation Process. I’m a bit fuzzy on the details of this Activation Process, but the bits and pieces I’ve heard aren’t encouraging. If I change my hardware or delete my install and want a clean install I definitely don’t want a hassle ahead of me, but only time will tell how the process will evolve.

Whatever the case, I decided to take one for the SimHQ team and I disconnected my internet connection prior to installing FSX so that I would be forced to go through the manual activation via the telephone. I was really expecting a nightmare of holding and problems, but the experience was actually quite simple and efficient. Once the install determined I did not have an internet connection it popped up a phone number for me to call. I dialed and got through to an automated activation process immediately. A computer generated voice prompted me to speak my installation ID after which the voice confirmed I had a legitimate copy and then read back a sequence of letter groups which I entered in the boxes below. Once that was complete, my software was activated. Total time on the phone was 4 minutes and 30 seconds. I was impressed. (Time Warner Cable could take a hint!) 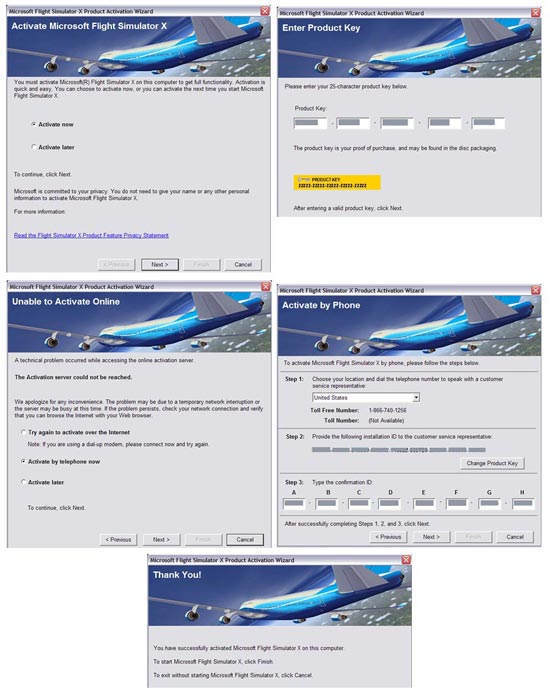 Once the installation process was over I fired up the program and was met with the opening screen. Now, I know what you are thinking: I didn’t defrag, or reboot, or sacrifice a chicken and put the feathers in my hat and turn three circles while chanting “system fast, system fast, frame rate stutters in the past..” When I initially started out on this review process, I wanted to do it on out-of-the-box software, without tweaking it or altering in any way other than what is allowed via the menu interfaces. While I know that the average online user is going to seek out maximum performance by running application killers and tweaking their configuration files to the max, I feel that software developers owe it to us users to make the process of playing games as easy and trouble free as possible. The fact of the matter is, I could write a whole multi-part series on tweaking FSX, but I’d rather concentrate on the gameplay for the moment. I did do basic “no-brainer” stuff like turning off realtime anti-virus scanners and any other background stuff that might have been running in the background.