Space combat games have been around for a long time, and there has always been a fantasy aura to them. But a new title is being developed that touts the “what if” scenario of realistic air combat tactics in deep space. We are about to see the emergence of a new simulation genre coined, Space Combat Simulation (SCS). The title is Rogue System and I talked to the developer Scott Juliano about his new project. During this interview you will see new images and video which is being shown for the first time. 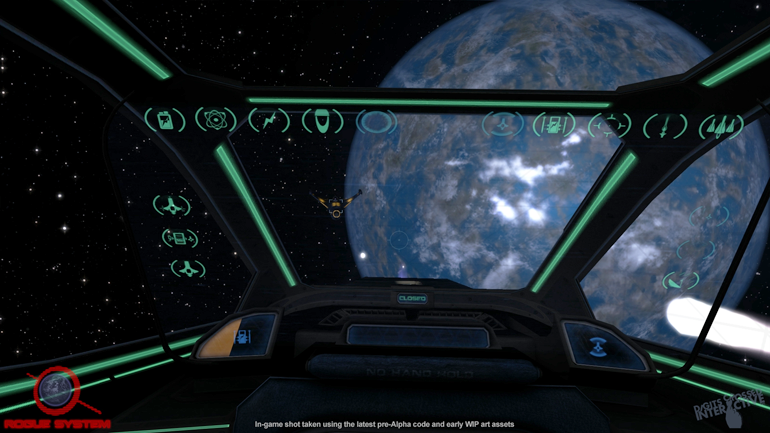 Scott’s biography is impressive, and many of you already know of his work in computer games and simulations.

After serving 8 years in the USAF, Scott began his career in the PC gaming industry in late 1998 with Atomic Games as a self-taught 2D artist mainly working on terrain maps and vehicle sprites for the 2D RTS game Close Combat III. He remained with Atomic Games for 2 more years, shipping Close Combat IV and V, until the studio closed. He then moved to Austin, Texas and Acclaim Studios as a 3D environment artist. While there he worked on the console title Vexx. When that shipped, he moved into a lead environment artist position for a 100 Bullets tie-in, but the studio closed before it was released. Following that, he moved to Z-Axis, a developer for Activision. There he worked on several levels for the console movie tie-in for X-Men 3.

Sensing another studio closure (which was happening to a lot of console studios in the early 2000s) he managed to get on as a Beta tester for PC simulations developer Image Space Incorporated (ISI), who at the time were getting ready to ship the racing simulation rFactor.

Working on his own time, he created his first track for rFactor – the now highly popular Birmingham Motorplex. From there he was contracted by ISI to build Lienz, a series of fictional tracks which was very well received by the rFactor community for its ambiance and attention to detail. Afterwards, he became a full-time environment artist for ISI and created several more rFactor tracks. His work day is now spent on its successor, rFactor 2.

In mid-2008, with an increasing urge to build his dream space simulation, Scott began teaching himself C++ code. In 2010, he felt he had the required knowledge to begin work on Rogue System. 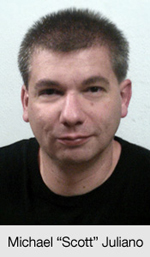 Doug: Hi Scott. Could you start by providing an overview about Rogue System?

Scott: I’ve basically merged the best ideas from the games of the genre’s heyday (Elite, X-Wing Series, Wing Commander, and Freespace) with the detailed system integration and control from today’s hardcore flight simulators. We treat the player’s pilot “avatar” as a detailed ship system, too. We provide a lot of feedback to the player about not only the condition of their ship, but also their pilot (mentally as well as physically).

For the initial release we are focusing purely on a single player military-style campaign. I’mdemanding exceptional single player for Rogue System – I’ll accept nothing less from myself in its design. It’s my belief that multiplayer has been used as a crutch in recent years, and I want to address that.

Doug: What about multiplayer?

Scott: There will be multiplayer, just probably not in the initial release. The open-ended trader-style play, nor first-person “land” combat will come at first, either. These gameplay styles are actually at the top of a long list of ultimate goals. They are at the heart of everything I’ve already built for Rogue System. For example, it will treat every “person” in the simulation as a character. Rogue System doesn’t care if the character is a human or a NPC – that can fly, shoot, buy, or sell. You wouldn’t bother with a system like that if multiplayer wasn’t a big goal.

Doug: Why are you waiting to include them then?

Scott: Quite simply, it comes down to resources. Current staffing is one man, me… and a few generous volunteers. As a professional game developer it would be irresponsible to say that I could complete the work for Rogue System with all its extension modules in two years with such a small team. So, I’m planning to release Rogue System in stages, focusing on one gameplay aspect at a time and working as efficiently as possible. The core elements to achieve space-combat within the most defined environment in terms of both location and gameplay is a military campaign – each side has a specific goal and a fixed number of different ships to use. 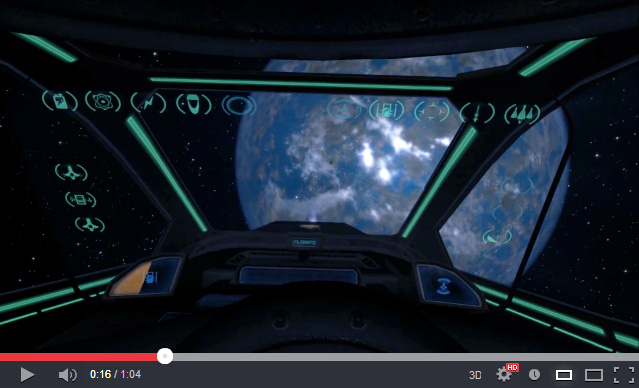 A new Rogue System teaser, and the first of a series in January

Scott: The teaser video I released today is the first that I’ll be releasing this month. It’s no secret that I’m planning a Rogue System Kickstarter to begin in February 2013.

The defining factor of what Rogue System initially will be at release is how well that does, and what stretch goals can be met, if any. Meeting higher goals allows a larger team, and then we can achieve more within the same development cycle.

Doug: What about your plans for the Kickstarter?

Scott: I’ll save most of the details for the Kickstarter presentation itself, but a general overview is that I’m seeking a budget in which I can fully develop Rogue System to a minimum level. I’ll also be presenting stretch goals that will define all the added things we can accomplish once the team size starts to increase. I am confident in the core design I’ve built in the last two years, and excited by the possibility of all Rogue System can be with enough support.

Doug: Okay, so can you tell us more about the single player campaign then as it’s you first target?

Scott: The player begins Rogue System as a pilot with the local security force of the orbital colony in which they live. As such, they’re charged with maintaining the local “airspace” for the traders that are coming and going against pirates and other baddies, checking for illegal cargo, performing rescues. Not long after the campaign begins things quickly go horribly wrong and basically all hell breaks loose for this tiny colony.

Technically, the campaign is a mix of scripted and dynamic missions. The scripted missions are such because they have to tell a story, and that story can change depending on how well the player, their squadron and sister squadron, performs during the preceding “campaign week” (5 or 6 dynamic missions make up a campaign week). A full campaign will probably have a bit more than 25 missions overall.

Doug: What sort of missions can we expect?

Scott: I realize that gamers have matured since the early 90s. They demand and expect an experience deeper than simply blowing up fighters over and over. I knew right away the missions would need to be smart and varied, with independent flights all working in harmony to achieve the mission goals. In other words, I took my cues from the hardcore combat flight sim genre, of which I’m a longtime fan.

Early on in the campaign the player will be given the choice to be a fighter or strike-pilot (there’s a story element that forces this decision). This choice will determine the overall type of missions the player will participate in. But, it’s not as simple as that. For example, strike packages need the support of a number of flights, each performing a specific task.

The player will be asked to perform a number of these duties throughout the campaign. I’m particularly proud of three tasks that I’m hesitant to go into detail about – but if they turn out as I have planned they’ll be brilliant.

Doug: After the campaign is over, then what?

Scott: When the campaign is over the player can continue to fly dynamic missions for as long as they like or restart the campaign. With the dynamic missions it will be a different experience each time. We and players can also create new scripted missions and campaigns to extend playability during the interim until we add trader-style play, which I’m planning as the first Extension Module.

When we do, the player will be given the opportunity to retire, or stay in service. If they remain in service they can continue to move up in rank, eventually commanding larger and larger vessels.

However, if they retire then they’re given a severance with which they can purchase a small ship, outfit it, and buy some cargo. They’re then free to make their own way in the galaxy. However, that war is still raging, and the player can be asked to return to service (when we release new campaigns) or they may just happen into a combat zone. Do they fight alongside their old friends? Have they changed allegiance? Or do they just try to escape? The choice is theirs.

Doug: Honestly Scott, so far Rogue System sounds similar to some other recently announced space combat games. Is this a “me too” project?

Scott: It’s funny. I first announced Rogue System to the community over at Nuclear Fusion (the engine that Rogue Systemuses) as well as here at SimHQ almost a year ago. Many of the features I mentioned then also seem to be in these new offerings (no, I don’t think my ideas were stolen or anything). What I think has happened is that I, as well as my colleagues, have come to similar conclusions about the space combat genre – that there is a lot of life left in it and some new directions with a more simulated “what if” approach.

Also, gamers expect a richer experience now. As I said earlier, the modern gamer wants to do more than simply blow up fighters over and over and over and over. This thinking leads to certain, obvious design decisions such as FPS-style play, the ability to explore and influence a persistent galaxy, and to do so with their friends online (to name just a few).