CrossFire Anti-aliasing and Edge Detect Testing  As done in the Radeon HD 4850 performance preview, SimHQ decided to take a quick glimpse at the HD 4870’s performance in single and CrossFire modes with higher forms of anti-aliasing. Call of Duty 4 was again used for these AA tests, with a single 4870’s 4x AA scores included as a performance baseline. 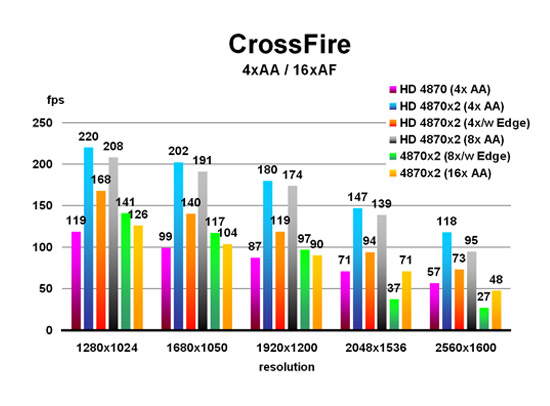 Performance scaled incredibly well with CrossFire at 4x anti-aliasing, with the frame rate actually achieving over 100% gains. As with the 4850s, edge detect is a great option for extremely clean geometry edges but it incurs a heavier performance penalty than 8x anti-aliasing, though 2560×1600 with 4x AA/w edge detect enabled is hard to describe in just how good the results look. 8x AA and edge detect is usable with two 4870s up to 1920×1200, beyond which point the frame rate simply plummets. Last, vanilla 16x AA remains playable even at 2560×1600, though as a setting is beginning to strongly enter the realm of diminishing returns. In this writer’s opinion, discerning between 4x AA with edge detect enabled and 16x AA is very difficult, so given a preference we would take the setting that allowed higher performance.

The Radeon HD 4870 is another great RV770-based product from AMD and is essentially a second solid blow to NVIDIA’s current lineup. The GeForce brand has seen the 9800 GTX price dropped from $300 down to $200 in an effort to counter the incredible value of the HD 4850, with a die shrunk $230 GTX+ on its way (at which point the current G92 chip-based GTXs will most likely be quickly phased out). NVIDIA has also dropped the GTX 260 down from $450 to $400 due to the HD 4870’s $300 price and relative performance, which to NVIDIA’s embarrassment is uncomfortably close to that of the GTX 260. While SimHQ did not have a GeForce GTX 260 on hand for testing, browsing around various hardware outlets shows that NVIDIA’s salvage chip part is not outperforming the HD 4870 by an amount that justifies even its new $400 price. Unfortunately for the firm, the GT200 chip is a massive chip that will simply not grant NVIDIA as much pricing flexibility as AMD has with the RV770, particularly once GDDR5 production is fully ramped and its pricing continues to drop. NVIDIA will need to work quickly to either get a die shrunk GT200 ready this fall or else engineer a smaller, midrange-oriented variant of their monolithic chip that can compete against AMD’s RV770.

For those willing to spend $600+ on a graphics upgrade for their gaming rig, the GeForce GTX 280 could be regarded as almost stillborn at this point in time due to the almost complete performance dominance the HD 4870 in CrossFire exhibited in our test results (with Crysis being the one exception). The exorbitant pricing of NVIDIA’s new high-end board also puts it into a very small niche of the potential market of buyers. Only those with a strong aversion to multi-GPU setups, or lacking a CrossFire compatible motherboard, and possessing fat wallets should consider a single-board solution like the GTX 280 over the performance of two 4870s, particularly in light of the incredible gains in performance scaling AMD’s driver team has made in recent months. Yet NVIDIA has recently acquired AGEIA and has readied drivers that enable GPU acceleration of PhysX-based physics support, and this is certainly a compelling bonus feature for GeForce owners. Counterbalancing this, AMD has an agreement with Intel to support their Havoc physics middleware, and the firm’s developer relations has also recently inked a deal with several major game publishers to provide DX10.1 support in future games, and if Assassin’s Creed’s unpatched performance is any indication the Radeon HD 4800 series’ excellent anti-aliasing performance could see further improvements in titles with such support. At the end of the day, however, most of us buy new graphics boards to keep up with the ever-increasing demands new games place on GPUs, and at $300 the Radeon HD 4870 is an excellent graphics board SimHQ heartily recommends to our readers.