Continuing our new series of articles we’ll be looking at some budget titles that will give you a lot of bang for your buck. Older sims, overlooked, overshadowed, or just plain under-marketed, some of the sims we’ll feature are worth a second look, and fortunately you’ll be able to find some of these titles in bargain bins at giveaway prices.

I’ll admit it. I’m a Peak Oil Doomer. (Someone who believes that the inexorable slide down the declining side of oil production will not be pretty at all.) So it was with great interest that I recently discovered a game that I hadn’t heard of — Frontlines: Fuel of War. The basic premise of the game is that in the not too distant future large-scale wars will be waged for energy resources. I hadn’t heard much about FOW, probably because the initial release in early 2008 was a bit of a mess. While the game received decent reviews, it was quite buggy, crashed frequently, and generally a lot of people gave up because the darn thing wouldn’t run very well. Fortunately for me, I unknowingly allowed nearly two years to pass before I found this gem, and in that time it has matured into quite a fun first person shooter.

In order to get to the fun though, there is a slight bit of pain to be endured. My PC version required a 4-step patching process to get to the final jewel that it is. The basic procedure is to download the four patches and apply them in order: v1.1.0 > v1.1.1 > v1.2.0 > v1.3.0. The process is easy, just download and launch them and they build upon each other. The bad news though — the cumulative size of the patches to download is just over 2GB! That’s going to be fun if you are still on dial-up!

Once you are up and running (flawless installation on Windows 7) the game is very entertaining. I guess the thing that makes it so fun for me is that the storyline is at least somewhat plausible. The graphics are outstanding, and the sound effects and music are some of the most immersive I’ve ever experienced in a game. The crack of a main tank gun or the loud clank of a round hitting your vehicle’s armor are enough to make you duck. Cut scenes are sprinkled throughout the game and the narrator sounds somewhat like Charlie Sheen. The whole game is very theatrical and you feel like you are participating in a very long and only semi-scripted movie. 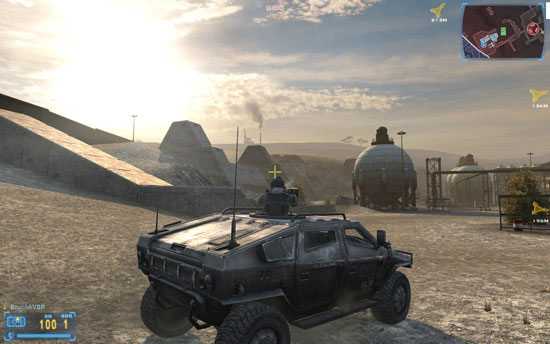 Gameplay is fantastic because you aren’t pigeonholed into the typical rat-maze of many first-person shooters. You are given objectives, often multiple ones per mission, and you are free to achieve those objectives in pretty much any way you want. The maps are fairly large and diverse, allowing for many different tactics and approaches. The single best feature of the game is that you won’t face unlimited hordes of enemies. You can stay put and play a tactical game and punish them on your terms and eventually you will gain the upper hand. I would recommend playing the game on the hardest setting since the gameplay is challenging on that level, but not overwhelming. The gameplay style reminded me a bit of Far Cry in that two different players would likely utilize totally different strategies to complete the objectives.

One of the most unique parts of FOW is the use of portable drone technology that you can utilize as you best see fit. Drones include small helo attack drones, hovering recon drones, small tracked vehicles, and suicide drones. All are controlled after launch via the player who must take care to be in a sheltered area while operating the drone. Like true R/C vehicles, the drones are limited on the distance they can fly or drive from you and you are limited to just a couple per mission so they must be used wisely. They can be picked up and stored in your supplies, but they are also delicate and enemy fire can take them out easily.

Like any FPS, weapons include assault rifles, grenade launcher, sniper rifles, shotgun, squad-assault weapon, grenades, and anti-vehicle rockets. The weapons are awesome and each has a strength and weakness. Enemy troops are armored and can take a beating, but weapons have differing kill power so a single shot from the sniper rifle or an up close hit with the shotgun can often kill right away while spray from a light assault machine gun can take a few bursts to score a kill. You often have friendly units working with you but more often than not they just soften up the targets and help keep them distracted while you do most of the heavy lifting. While you’ll spend much of the game on foot you’ll also have a chance to mount various vehicles including a HUMVEE-type vehicle, a heavy tank, an armored fighting vehicle, and an attack helicopter. The sounds and effects of all are fantastic. Spraying enemy infantry with the Bushmaster type gun on the AFV is particularly gratifying.

Environments are particularly well done. Vast maps with lots of room for cover and stealth provide a ton of options. Terrains vary from wide open forests to urban warfare. In one of the missions you are tasked to clear two large buildings, and the fight within is fantastic. It isn’t just a run and gun battle though (unless you want it to be), and the smart player will find creative ways to use their drones (even flying them out of windows and into other areas of the building) to gain advantage. Depending on the difficulty level you choose you are given multiple lives but other than the set save points in multi-tiered missions you have no save capability. After using up three of my lives on one particularly hard level I was on my last life and one hour deep into the mission when I got careless with the last assault of the level and I could have jumped out a window I was so aggravated! But that is what makes the game so fun — the careful and tactically oriented players will enjoy FOW.

It is worth noting that I played all of the levels of FOW, some 35 missions, and never once had a lock-up or crash. The patched game is super stable, terribly addicting, entertaining, and rates among the best first person shooter games I’ve ever played. I can’t comment on the multiplayer aspect since I haven’t signed on to a server to get my ass handed to me, but it is something I’m looking forward to. Below is a closing video showing Frontlines: Fuel of War in action. Since most people have moved on FOW can be found on the Internet going for as little as $7.00, and if you are looking for a great cinematic shooter — look no further.

What is Virtual BattleSpace 2™? Page 3