Ironclads – High Seas is one of the more difficult games I’ve reviewed. The Totem Games rendition of high seas combat between Confederate and Union forces in the 1860s has a lot going for it, but if you are looking for a true historical game covering naval combat of the mid 19th century you probably will be disappointed. 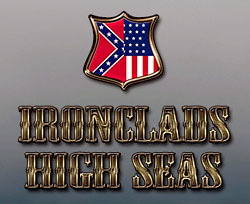 That’s not to say the game isn’t fun. It is, but it is not an in-depth simulation in the vein of similar games like Distant Guns. Right now Totem Games is offering the title at $16.99 so the game will make for a pleasant diversion for those folks that want a game that plays well on mid-range systems. This is a pretty good laptop game if you have an up-to-date laptop with a good graphics card. Nonetheless, there are a few things missing that keep this from being one of the more outstanding games of the naval combat genre.

The game is available only as a download only from Totem Games. You have the opportunity to purchase a back-up CD or 24 months of backup download protection to go with the game. I suspect most folks will just burn their own CD and save the 7 bucks. Buyers have the option to pay via major credit cards or PayPal. The site also says you can send a check or cash. Cash is never a wise choice via snail mail.

While the game installed without a problem, I had to write to the company to get a .dll file to put into the game folder to get it running. No idea if this was a fluke with my computer, or can be expected for all installations. From what I can tell, Ironclads doesn’t appear to have any of the intrusive DRM software that other games have.

The graphical interface of the game is generally clean and smooth. Graphically, the game looks pretty good, is functional, and adds to the game. Ships are well rendered and look good. I have seen some sailing ships from this period on display in harbors like San Francisco and these ships look like pretty good renditions. Smoke and fire effects are present in the game, and while somewhat generic, they are adequate.

When Totem Games called the game Ironclads – High Seas they mean high seas. The previous Totem Games title, Ironclads – American Civil War dealt more with near shoreline battles. The game looks like it is being fought in the middle of the Atlantic Ocean, or the Gulf of Mexico, instead of the near shoreline arena.

The water effects are nice, but the sea is a bit too blue, and certainly way too calm to be authentic. When you consider that more Union Ironclads were lost to bad weather, including the USS Monitor, you realize how unrealistic the placid sea representation is. Yes, there are times when seas are like glass, but with no change in the weather provided, combat is always in perfect conditions and does not factor into the outcome of battles. 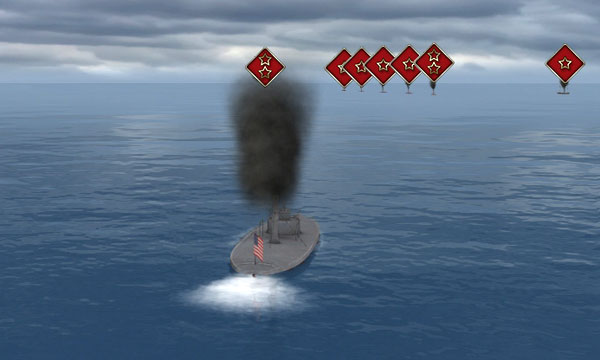 Ships portray increasing signs of damage, and the visual damage is more or less an abstract representation. Guns that are knocked-out are modeled to point downward. Deck fires are represented. The more severely damaged ships are represented, and slowly sink when damage is beyond control. 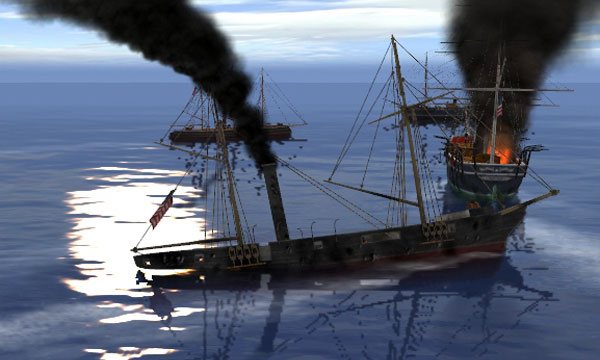 Missing are animations of the on-deck crews. The ships are totally unpopulated in the game, something that looks strangely eerie in close-up mode. 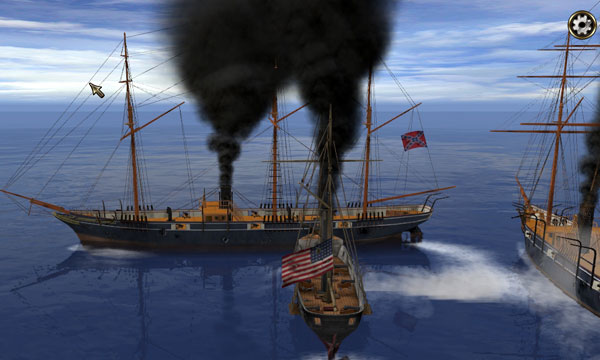 That isn’t a real big deal as long as the gameplay is decent and for the most part, it is. This game was released as a budget title, and I tend to look at budget titles with a little less of a critical eye than I do the usual fare of $50 mainstream titles.

Gameplay is very straightforward, and reflects the budget styling of the title. There are a lot of good things about this game and a few things that this title really needs added.

There is no single mission or campaign mode in this game. Players start out with a certain amount of money in which they can purchase ships. The selection of ships starts out paltry. It covers a few early monitors and steam driven ships of the period. You usually have enough points to pick up a couple of good monitors and some other ships that will be used to fill out your fleet. You can divide you group into three different columns or sections. 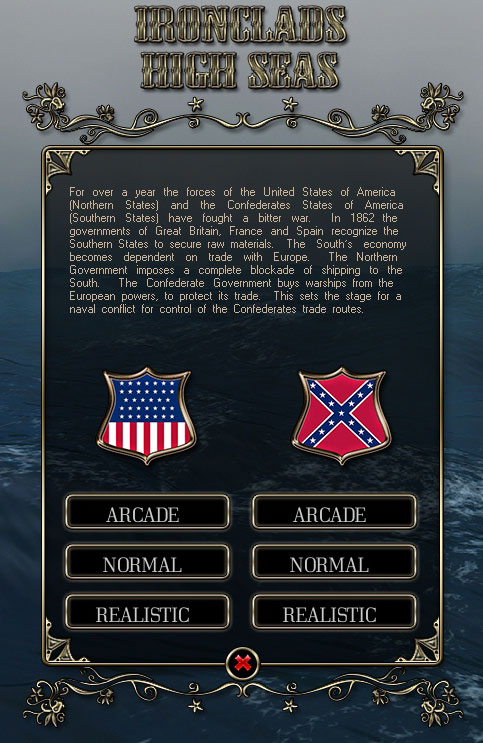 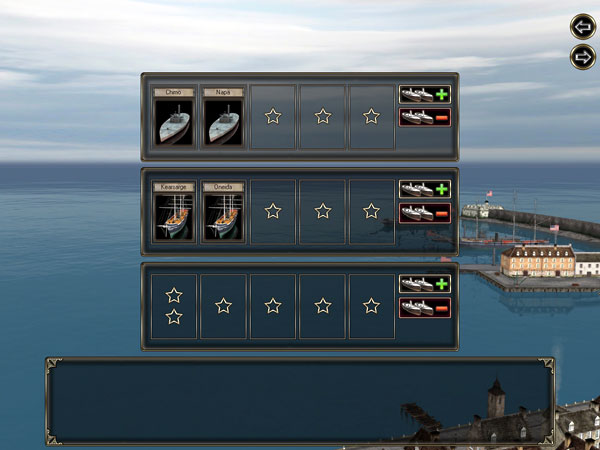 You start out with your ships arrayed in columns, completely stopped and in view of the enemy fleet. You then command you ships as you see fit. Each column is individually controlled and you set the speed via the control interface at the bottom of the screen. You can command each group to change course, hold fire, speed-up or slow-down. Unlike games like Distant Guns you can’t order certain changes in battle formations or give waypoints for the ships to follow. 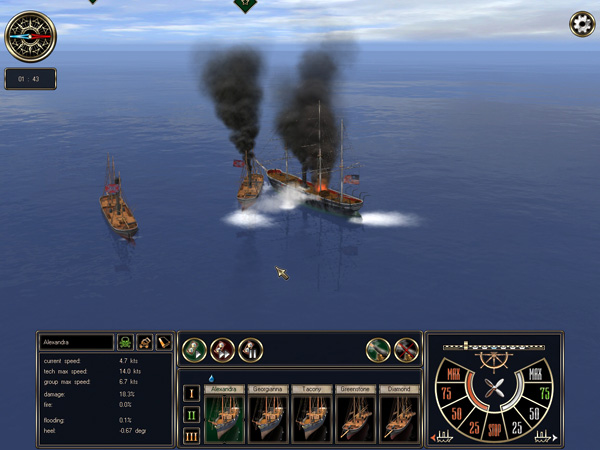 This means you have to be very careful monitoring your ship columns otherwise you will find yourself with a group of ships way out of contact with the enemy and too far away to provide support. Likewise running straight ahead at the enemy can result in disaster if you take lightly armed ships up against the iron battle wagons of the enemy.

The AI is actually fairly good as far as ship-to-ship combat goes. The battlefield setup is straightforward. As ships take damage, they try to break off and get out of the battle. I have seen the AI concentrate on damaged ships. Well done! Unfortunately most of the gunnery is primarily controlled by the AI so you are unable to target specific ships or formations. This is probably fairly realistic since in reality an admiral in the 19th Century would have little control over exactly what his ships would do once the battle was joined.

So while the game is fun, it tends to be abstract in its historic portrayal, and a problem for the true historical gamer. There is no campaign mode in the historic sense of the world.  Understandably, it would be difficult to create a traditional campaign that would have been plausible since the Confederacy really didn’t have a true navy other than a few ships. But there is no “goal” other than stringing together battle-after-battle, improving your ships and your fleet against increasingly tougher opponents. That means there is some replay value and the game is fun but it also means you don’t get the historic context of what was at stake in famous American Civil War naval battles.

Since there are no single missions in the game, spirited battles like the CSS Alabama vs. the USS Kearsarge are not represented. These would have been fun and could still be done if there was a way to modify the “buying” screen to allow for a single ship or one-on-two ship combat scenarios. It would be an opportunity for Totem Games to add a quick mission builder with the campaign code setup to allow such battles.

The other thing that is missing is multiplayer. This game would have been tons of fun against another human opponent but to put that code in probably would surely require more time and more expense, and probably doesn’t fit the budget titles scope. Maybe later?

This is a good game especially considering the price. No, this isn’t a major naval title like the Silent Hunter series or Jutland, but what the game delivers for its price is well worth the money. You get lots of hours of fun and because the battles never progress quite the same way, the game has good replay value.

Yes, it would have been nice to have multiplayer in the game and single missions are probably the biggest omission of the game. But for what Ironclads – High Seas costs, it more than delivers in fun and basic entertainment. I have no problems recommending this game. If you want something that will fulfill a desire for naval combat gaming, run on your laptop, looks decent without incurring a big expense, then this is a good game to consider. 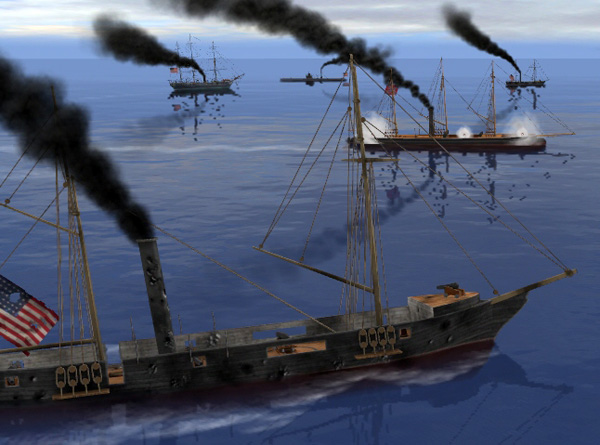